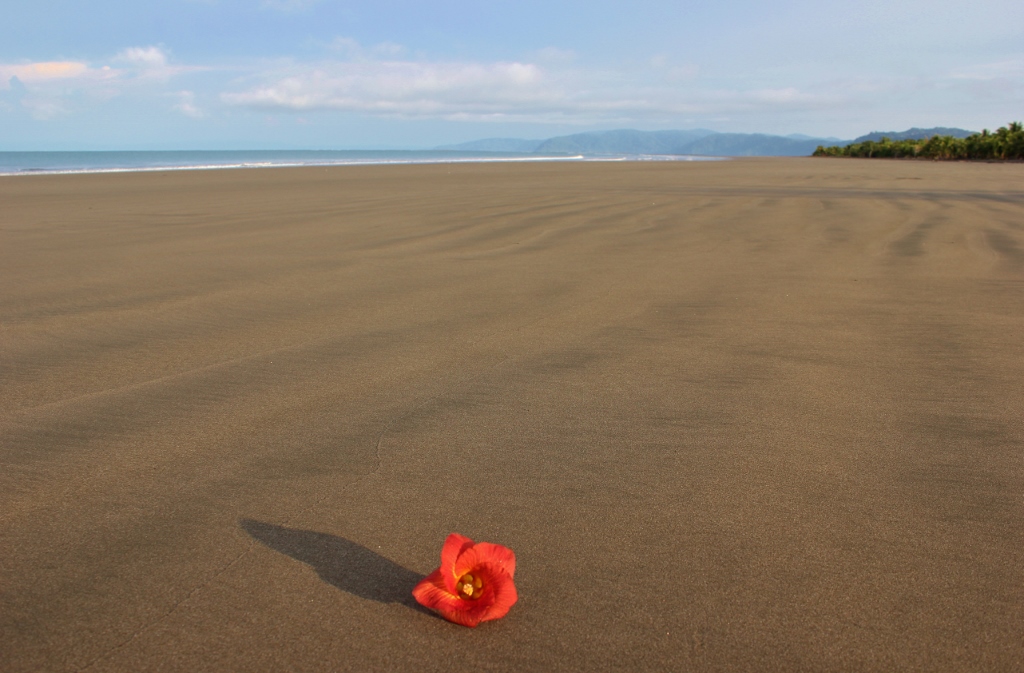 I was inside the house working on my computer, two fans noisily spinning the hot, humid air – one pointed on me, one on the computer, neither doing much to cool the temperature. Kris suddenly appeared at the screened window. In a low voice, he hissed, “Come out here. Now!” In a fluid motion, I was out of my chair as I swiped my camera from the tabletop and started moving toward the door. I had no clue what it was I was racing toward, but I had learned early on that the nature in Costa Rica was almost always photo worthy.

As I dashed out the screen door and around the corner of the house, Kris pointed in the direction of the bushes. I strained my eyes against the bright sunlight until I spotted what it was he wanted me to see. At eye-level just three feet away, tucked amongst the leaves and clinging to a branch, was a sleepy sloth.

I started snapping photos at a furious pace; it was the first sloth we had seen up close…and we were really close. After racking up nearly 100 pictures, I took time to simply observe the creature. So relaxed and seemingly oblivious of our presence, I soon realized my rapid fire shots were unnecessary; Harriet (as we came to call her) was there to stay. Well, at least for the next eight hours.

Since we arrived in Zancudo, Costa Rica, we’ve been immersed in nature. Our location on a thin peninsula sandwiched between the ocean and the river is prime for an abundance of flora and fauna. During our stay, we’ve witnessed stunning nature in Costa Rica, never taking for granted the unique species we are among.

Nature in Costa Rica: Flora in our yard

A pineapple plant growing in our yard

A bunch of plantains

A cluster of red flowers

Our yard is enveloped in a swath of lush greenery. From flowering shrubs to deciduous trees to a variety of palms, this is jungle living. The glassless, screened windows of our house allow us to experience nature even when indoors; like on a current, scents and sounds waft through the air and into our home. Besides the fragrant flowers that add a splash of color against the green, the edible plants in our yard have kept us fed.

Growing within the boundaries of our property are pineapples, coconuts, starfruit, cashew apples and sweet, ripe mangos that are practically dripping from the branches. For a little variety, we don’t have to go far – or anywhere for that matter. Growing in nearby yards are limes, papayas, bananas, plantains and avocados (some that weigh up to two pounds!). Our neighbors gather the produce into wheelbarrows or coolers, wheel them to our front porch and offer them for sale. Farm-to-Fork at its finest.

Nature in Costa Rica: Fauna in our yard

Blue-gray and Cherrie’s tanagers in birdhouse in Costa Rica

Chickens in the yard

More than just providing a feast for us, the trees and shrubs that surround our house provide homes to tropical birds, scaly lizards and an incredible number of interesting insects (few of which I can identify). Shimmering hummingbirds, blue-gray tanagers, Cherrie’s tanagers, great kiskadees and green parakeets frequently flitter from palm branch to feeder to flowering bush. The loud, piercing cry of the Scarlet Macaw garners our attention and we often catch a glimpse of the streak of red feathers overhead as the birds move in pairs between the trees.

Less aesthetically appealing, yet perhaps even more exotic and enthralling are the dinosaur-looking lizards. Five-foot-long, spiked-back, green iguanas look menacing, yet feast on a steady diet of leaves. (So, I suppose they are only menacing to the trees.) With their razor-like claws they scurry up trees faster than the squirrels. Their long, black-ringed tails drape down as they delicately balance on flimsy limbs, stretching as far as they can to dine on foliage. When we hear a thud, we know one stretched too far.

Slithering lizards – both big, small and camouflaged brown, black or green – prowl the yard, most keeping their distance and running for cover when they hear us coming. However, that’s not the case with geckos. The noisy, chirping, little lizards, which are the size of my pinky finger, are part of the household. They are our roommates, clinging like Spiderman to the walls and ceilings and (thankfully) ingesting a bevy of the stealthy mosquitoes that sneak into the house.

A few other creatures have managed to slip through the cracks as well. We are most frequently visited by toads and sometimes by crabs who have taken a wrong turn while trying to find the beach. A little encouragement from the broom and dustpan helps set them back on course. Less frequent (and much less welcome) are the two-inch-long scorpions. Unlike the crabs that try to hide, the scorpions aggressively snap their pedipalps in our direction, their poisonous stinger poised and ready to strike.

Nature in Costa Rica: Fauna at the beach

Local dogs play together on the beach in Costa Rica

A hermit crab on the beach in Costa Rica

A puppy on the beach

A snowy egret on the beach in Costa Rica

The living creatures we see at the beach are less intimidating (well, at least for the most part!). Birds wade through the waves, pods of dolphins effortlessly break the surface of the water and sea turtles bob their heads while swimming close to shore. In the soft light, we’ve witnessed the distant silhouettes of giant stingrays and enormous fish as they soar through the air; escaping a predator, hunting prey or just being playful, we are unsure.

We see fish while out swimming in the sea, too. Entire schools of fish will rise to the surface and splash about not more than 20 feet from where we are swimming. When the water is crystal clear, we can even spot translucent fish with bubbly eyes the size of a pinpoint. On a few occasions, we’ve caught sight of large fish – and, one time, two dolphins – riding the waves alongside us. Swimming with sea creatures has become the norm, yet we’re still dazzled by it.

Occasionally, we’ve come across species that are less common. One afternoon, we found the beach covered in an entire brigade of Portuguese Man o’ War. Thousands of clear ballooned bodies with electric blue, venomous tentacles littered an entire stretch of the beach. They disappeared the next day…and haven’t returned. However, the most bizarre thing we’ve witnessed is a gigantic insect the size of my hand. I’m not exaggerating. The Harlequin beetle can grow to three inches in length, with front legs longer than a foot. The one we saw had been drenched by the surf and was struggling to escape the waves. Using a stick (a very, very long stick, I might add), we moved the gigantic, long-limbed insect to drier sand.

Some of the animals in Costa Rica aren’t at all foreign to us, but provide just as much entertainment. Hundreds of small hermit crabs parade north in the sand each evening, passing us by as we watch the sunset. Bright orange sand crabs peer out from their freshly dug holes, which are surrounded by their neatly patterned, excavated sand. In our neighborhood, chickens roam free, scratching at the ground beneath the mango trees and sometimes knocking at the back door to see what treats we might toss their way. Stray dogs (and owned dogs, for that matter) serve as the local beach bums, playing in the sand and exemplifying a life of ‘pura vida’.

Nature in Costa Rica: Fauna on the river

Brahman Cows on the bank of the River Coto

In, on and near the river are entirely different creatures, crocodiles being amongst the most elusive and feared (well, at least by me). Not far from our house, we’ve seen crocodiles lazily sunning themselves on the shore at low tide, but they are quick to dive under water when humans approach. Except when fishermen are cleaning their catch; then the crocs hang around, gobbling up the scraps while snapping their fierce jaws in the air and showcasing their full set of curved teeth. There isn’t a great enough distance to make me feel at ease, yet I’m drawn to the scene.

Going upriver by boat has introduced us to even more nature in Costa Rica. Whether zipping up the main channel or quietly floating down sloughs, we are shrouded in nature. Along the banks, animals lurk in the shadows. Birds hidden among the branches sing to one another on opposite banks of the river, echoing each other’s call. We can distinguish the distant roar of a howler monkey from the grunts of hoofed animals closer to the shore, yet we can’t determine exactly what species is making the noise.

In the cool mornings, blue butterflies bounce on the breeze just above the water. Flying fish glide in the wake alongside the boat and birds of varying species fly overhead, swooping low to the water in hopes of a catch.

In the hot afternoons, crocodiles move from land to the water, their splash and subsequent ripples let us know they are nearby, but only when we spot their snouts do we know their whereabouts for certain. Plumed basilisk lizards run on the water, racing toward the shore and earning its common nickname, Jesus Lizard. A flock of white ibis mingles with the cattle in the riverside fields. The Brahman cows with their distinctive hump seem as interested in us as we are in them and we lock eyes in a classic staring contest. The birds are less curious and scatter on our approach, relocating to the limbs of a decaying tree.

Sunset over the Osa Peninsula

The nature is Costa Rica is simply everywhere. From the living plants and breathing animals to the natural environment, nature steals the show in Costa Rica. The grains of sand on the beach that squish between our toes during our morning walks; the daily rotation of the hot sun that melts into the peninsula across the bay at the end of each day; the cool air that is ushered in by raging storms and the deafening crack of thunder that occurs simultaneously with a bolt of lightning; the shift of earth beneath our feet and subsequent jolt that rises through our joints when an earthquake occurs – Costa Rica is nature unlike anywhere else we’ve ever experienced it.

Want more nature in Costa Rica? Click here to read about Wildlife on the Osa Peninsula!

Our Top Tips For Your Trip To Costa Rica

During our visit to Zancudo, we were house and pet sitters (found through Trusted Housesitters). However, for those who prefer staying in traditional accommodations, there are a few accommodations to choose from in the area.

Looking for more travel planning tips? Head over to our Travel Planning page and be sure to take a look at our complete packing list!

14 thoughts on “Immersed in Nature in Costa Rica”