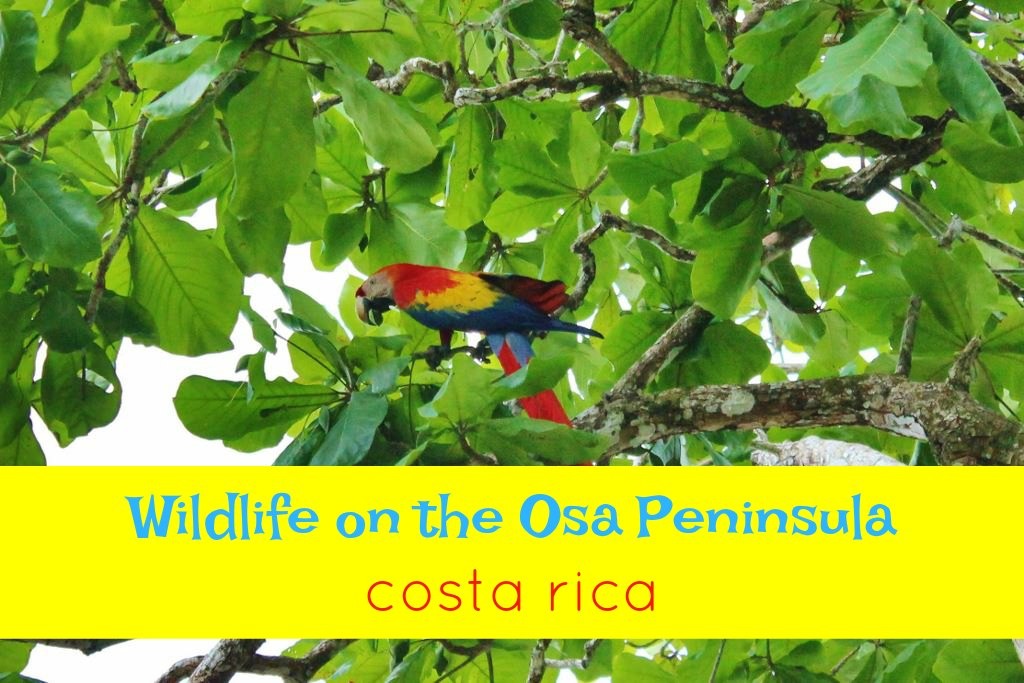 We stood on the side of a dusty road on the Osa Peninsula, using our hands to shade our eyes from the morning sun as we peered into a dark, leafy tree. I looked in the direction Juan Carlos was pointing, straining to see the sloth wrapped around a branch. I could only see a shadowy mass resembling a tree knot. We crept into the edge of the forest, searching for a better angle and a spot where Juan Carlos could set up his tripod and spotting scope. Through it, I could clearly see that the tree knot was, in fact, a small, furry sloth – and I could hardly believe that I was actually seeing one in the wild. It lazily turned its face toward us –half-interested/half-amused at the humans below – and then stretched before slumping back into the crook of the limb and dozing off again.

As we took turns looking through the scope and binoculars, roars erupted and echoed from deep within the jungle. The sound was terrifying, a noise resembling those from Jurassic Park. “Just howler monkeys,” Juan Carlos said, chuckling at the fearful look on my face. Besides the sloths, monkeys were exactly what we had come to the Osa Peninsula to see.

The Osa Peninsula dangles off Costa Rica’s southwest corner, near the Panamanian border, with the Pacific Ocean to the west and the Golfo Dulce to the east. Much of the land is protected, either by forest reserve or the Corcovado National Park, and wildlife thrives. Nearly half of all the wildlife species found in Costa Rica can be found on the Osa Peninsula, including 140 mammal species, 463 types of birds, 116 kinds of amphibians/reptiles and 10,000 different insects. With an abundance of wildlife and an expert guide, the odds were in our favor for spotting animals in their natural habitat.

Our day started early, leaving Zancudo – across the Golfo Dulce from the Osa Peninsula – at 6:00am by boat. The hour-long ride across the water in early morning was a refreshing respite from the heat that is always present. Natural Costa Rican air conditioning. When we arrived at the pier in Puerto Jimenez, Juan Carlos was waiting for us with his car and we set off on our personal tour. Before we even made it out of the Puerto Jimenez town limits, we spotted toucans and we took that as a good omen for things to come.

As we left Puerto Jimenez behind, we kept our eyes peeled for movement in the trees. Juan Carlos knew exactly what to look for and was quick to stop if he thought he saw any wildlife. For our day tour, we wouldn’t be officially going into Corcovado National Park, but we didn’t need to; wildlife was all around us.

The first monkeys we saw were howler monkeys occupying the tops of several clustered trees. Unlike the ones we could hear roaring from the depths of the forest, these howler monkeys were quiet. It was hard to tell their dark bodies from the shaded tree limbs. They seemed content to drape themselves over the branches, their long tails idly wrapped around the tree, their arms and legs slack like the leaves around them. Occasionally, they would move about, rattling the leaves and revealing their presence.

Squirrel monkeys, on the other hand, were small, wiry and speedy. We followed an entire brigade of them as they dashed from one tree to the next down a tree-lined lane bordering a farm – most often only seeing the blur of their long tails. When they paused long enough, we could see their funny white faces, as if painted like a clown. As we continued down the road, Juan Carlos pointed out a red-lored parrot, a fiery-billed aracari, a yellow-headed macaw and several egrets before spotting the two-toed sloth. We had only been on the Osa Peninsula for two hours.

We left the open farmland behind and became enveloped in dense forest. A white-nosed coati crossed the road in front of us. Juan Carlos parked the car and we set out on foot, crossing over a short swinging pedestrian bridge that spanned a clear, swift-moving stream. A blue morpho – a radiant and shimmering butterfly bigger than a hummingbird – floated by, bouncing on the breeze. Another squad of squirrel monkeys raced through the trees, entertaining us with their quick and agile movements.

We saw more howler monkeys, again not making a sound. But, this time, they were lower in the trees, so we could see them better. The sun highlighted the silhouette of a young baby – only a few days old – clinging to its mother. The protective father kept a watchful eye on us as the mother repositioned behind a screen of leaves.

We continued on, trudging up a small hill that – in the humid, dense heat – felt more like a steep mountain. Our skin was sticky and our loose clothes damp, but we were preoccupied with seeking out spider monkeys. Known to frequent the particular area we were in, spider monkeys are the kind that effortlessly swing from branch to branch, using their tail as a fifth limb. About every 15 feet we would stop walking and search the treetops, which was just as much of an excuse for a break from the trek. We were nearly ready to move on when, from the other side of the road, leaves began to shake. As if Juan Carlos had summoned them himself – a small crew of spider monkeys came into view. There was a young one in tow – not a baby, more like a toddler – who was daring and playful, leaping to far branches we were sure he couldn’t reach. Although he faltered from time to time (and endured a few stern looks from his mother), he never fell.

A spider monkey peers down at us on the Osa Peninsula.

When the monkeys moved on, so did we. We hiked to the top of the hill to the high-end Lapa Rios Ecolodge for the sweeping vista out to sea. The elevated viewing deck put us eye-to-eye with two chestnut mandibled toucans perched in a tree.

Heading back down the way we came up, we turned, angling toward the water. We passed more monkeys – both spider and squirrel – and a large hawk protectively watching over its nest before stepping onto a pebbly beach of a crescent moon bay. The teal water playfully lapped the shoreline, but our eyes were fixed on the trees and the splashes of red, yellow and blue feathers against the bright, green leaves.

A flock of the striking scarlet macaws noisily descended on beachfront trees to feast on nuts. The large parrots, with white faces and strong, hooked beaks, are popular residents on the Osa Peninsula. While they are magnificent to see up close, the true beauty is to see them in-flight – a streak of primary colors soaring through the air on a three-foot wingspan.

It was not yet noon and we had seen more wildlife on the Osa Peninsula than we had anticipated. Juan Carlos, however, had one last spot he was eager to show us. He drove in the direction of the pier, passing the airport and then parking along the side of a residential street. He led us down a narrow path that opened onto the edge of a shallow pool of water. Lurking below the surface – not more than 50 feet away – were crocodiles. Baby crocodiles, Juan Carlos assured us, and their mother away. Three shadowy four-foot-long forms moved through the estuary, leaving a trail of murky water in their wake, their snouts exposed.

Our Osa Peninsula guide, Juan Carlos with Vinny and Kris.

With our eventful morning, we hadn’t thought much about lunch. But, with time to spare, we swung into Marisqueria Corcovado, an open-air, waterfront restaurant facing the pier that was right beneath the Puerto Jimenez airport flight path. We ordered a round of the local microbrew, La Peninsula, and an order of the recommended, mixed seafood ceviche – a tangy concoction of fresh fish, octopus, clams and shrimp – served with a side of patacones (fried plantains) – and we devoured it.

Juan Carlos shared more stories about what is was like to live on the Osa Peninsula and we were keen to hear them. The day felt both long and short – we had seen a plethora of wildlife on the Osa Peninsula, yet it was still early afternoon. Right on schedule at 1:00pm, we met our boat at the pier. The breezy, relaxed ride back to Zancudo felt even better than it had in the morning.

Start planning your trip to Costa Rica! Search for the lowest airfares, the best accommodations and fun things to do…then start packing!  Want more travel planning tips? Head over to our Travel Planning page for more information and tips on traveling – and for country-specific information, take a look at our Travel Guides page!

6 thoughts on “Wildlife On The Osa Peninsula, Costa Rica”