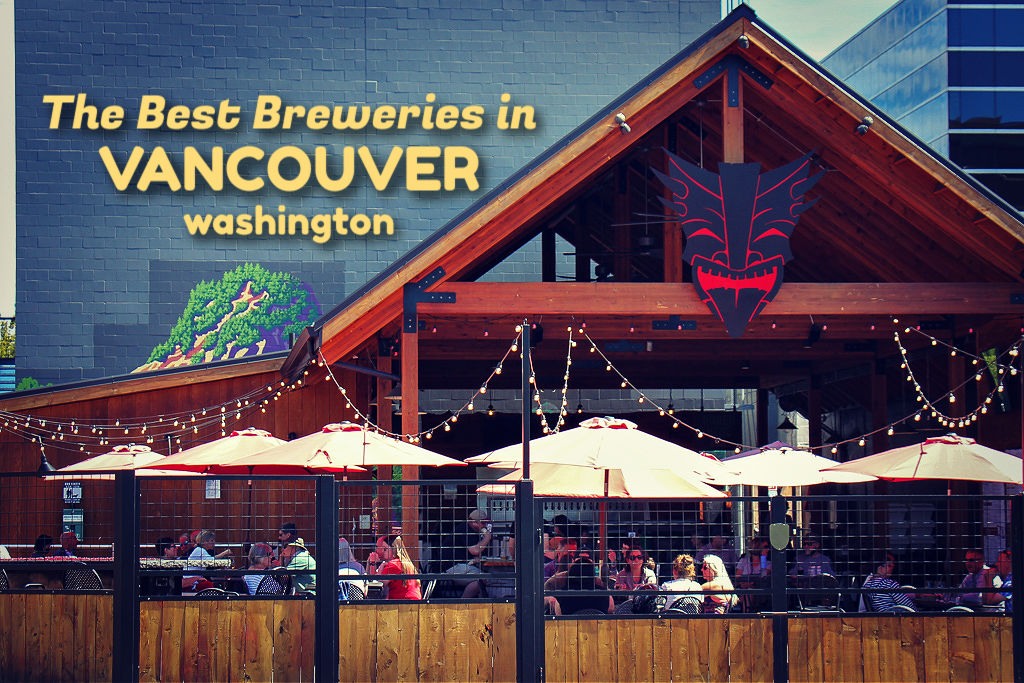 The number of craft breweries in Vancouver, Washington is astounding! Throughout the city there are more than 20 brewers producing local craft beer – and several taprooms are located within a one-mile stretch in the heart of downtown Vancouver, WA.

During our month-long stay in the city, we were on a mission to taste-test the best craft beer in Vancouver, WA…and we sampled our way through the Downtown Vancouver, Washington craft beer scene.

It is no wonder Vancouver, Washington hosts so many brewers; the state and region have a long beer-loving history.

The first brewery in Vancouver – aptly named, Vancouver Brewery – dates to 1856. The brewery, which was located near Fort Vancouver, was popular with soldiers. Through the years, the Vancouver Brewery changed ownership (Henry Weinhard even owned it for three years from 1859 until 1862), switched locations and was renamed a couple of times until it finally closed its doors in 1985.

Save, Pin or Bookmark this post so that you can easily find these craft beer bars in Vancouver, Washington!

Occupying the historic Columbian newspaper building, Trusty Brewing is one of the best craft breweries in Vancouver, WA. The corner spot is bright and airy, with a few tables outside along the sidewalk, as well. Established in 2015, Trusty produces a full line up of beers – including the award-winning Corner Window IPA (that is out-of-this-world delicious!). The friendly new owner has a background in German brewing, so it will be interesting to see what new brews will be introduced to the Trusty line up!

Pro Tip: Go on Taco Tuesday when you can indulge in their amazing tacos at a super price!

Located in the heart of downtown, adjacent to Esther Short Park, Loowit Brewing Company offers a casual space for beer aficionados and friends to gather. Open since 2012, Loowit creates a wide range of unique beers – a few of which have won international awards. With 20 taps, incredible service and phenomenal fare, Loowit ranks as one of the best brew pubs in Vancouver, WA.

Pro Tip: Don’t leave Loowit without trying a burger! The German-themed Berliner Burger pairs well with any beer and the spicy Urban Cowboy Burger is a simply satisfying, heaping mess of a meal.

Heathen Brewing has a flair for creating experimental brews. Sourcing local products and world intrigue, their line up of brews includes long-standing favorites and creative concoctions. The Heathen Brewing Feral Public House is ranked as one of the best breweries in Vancouver, WA for happy hour, which includes beer specials and pub grub discounts, too. The huge corner patio is the perfect place to sip a pint after a day of sightseeing.

With a commitment to quality, Trap Door Brewing is a family-run brewery featuring 12 rotating taps of beer made on-site. In addition to the standard brews of the Pacific Northwest, Trap Door produces interesting beers with fruity notes and bold flavors. Situated right on Main Street in Uptown Village, the Vancouver, WA brew pub has seating both indoors and outside on a spacious patio.

Pro Tip: Trap Door does not have a kitchen, no need to worry, though – there are two permanent food trucks (serving Thai and Mexican) next to the patio. They also feature items from the very popular Bleu Door Bakery and allow customers to bring in food from other nearby eateries.

When it comes to unpretentious brew pubs in Vancouver, Washington, Doomsday Brewing excels. The low key and down to earth Doomsday Brewing Safe House invites beer enthusiasts to enjoy their brews in a casual taproom atmosphere. The beers they produce are innovative and refreshing – like the Agent Orange IPA and the Beatdown Beet Wheat beer – and their tap list is continually rotating.

Pro Tip: Don’t miss the expansive patio out back where you can play corn-hole and they bake great Pizza out of their foodtruck!

Featuring a cozy bar and charming patio, Old Ivy Brewery is a classic pub offering craft beer in downtown Vancouver, WA. Half of the 20 beers on tap are Old Ivy creations, while the remainder are guest taps from local and regional brewers. For us, the stand-out brew is their own Marion Berry Pale Ale – which was dark in color, but crisp and refreshing in taste.

Pro Tip: We did not eat at Old Ivy, but their hot dog and sausage menu looks outstanding!

One of the nano breweries in Vancouver, WA, Beerded Brothers was at the top of our list of brew pubs to visit in the city. Unfortunately they were closed during our visit to VanWa.

Pro Tip: Read our blog post, Things To Do in Vancouver, Washington for more tips on what to see and do in the city!

Fresh beer in Vancouver, WA isn’t only found in brewery taprooms – there are a few craft beer dedicated bars in the city, too!

Regarded as one of the best bars in Vancouver, Washington for craft beer, Tap Union has 20 handles and a huge selection of bottled and canned beer, too. Their wide selection of regional beers can be enjoyed upstairs in the loft or outside on the patio – and everything is offered for take away as well.

Brickhouse is another downtown bar serving beer brewed in Vancouver, WA and the surrounding region. The family-friendly establishment offers a full menu, live entertainment and a long list of local beer on tap.

The Thirsty Sasquatch pub in Uptown Village also pours local craft beers – but during our time in the city, they were closed for renovations. Rumor has it that they will be opening an adjoining pizza joint (they already ran a pizza cart food truck), but thirsty patrons will have to wait and see!

Use this link to Google Maps for an online version of our Vancouver, WA Brewery Map.

In our above list, we focus on the taprooms and brew pubs in Vancouver, Washington that are located in the heart of the city. That said, there are many more breweries near Vancouver, WA – outside of the downtown area.

The Victor 23 Brewery Vancouver, WA is situated north of the city on the east side of I-5 – and is rated as one of the top breweries in Vancouver, WA.

The region around Vancouver, WA is not only suitable for growing hops, but for growing vines, too. The fertile land and climate are prime for growing grapes – and several wineries dot the landscape.

However, wine enthusiasts won’t need to go far to get a taste of local wine, there are several winery tasting rooms right in Downtown Vancouver, WA.

Use our Vancouver Beer Map (above) to create your own bar-hopping brewery tour.

Looking for more things to do in the city? Find our top tips in our blog post, The Best Things To Do in Vancouver, Washington.

Start planning your trip to Vancouver! Search for the lowest airfares, the best accommodations and fun things to do…then start packing!  Want more travel planning tips? Head over to our Travel Planning page for more information and tips on traveling – and for country-specific information, take a look at our Travel Guides page!

Does your PNW Vacation also include other adventures? Fantastic! Be sure to check out our complete guides to Montana, Bend, Oregon,  Hiking Glacier NP, Portland, Seattle, Oregon Hiking and the Best Oregon Coast Road Trip!

We Want To Know: What is your favorite brewery in Vancouver, WA? Tell us in the comments below!