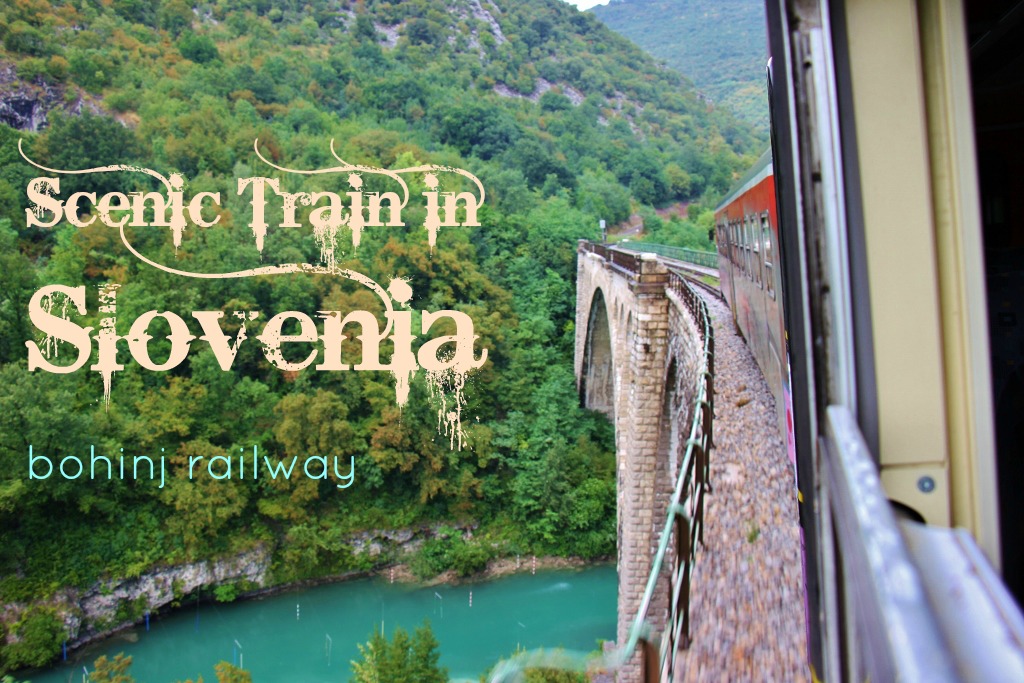 For most people, the purpose of taking a train is to get from Point A to Point B. However, when there is a train that navigates through stunning landscapes, the sole reason for riding the rails can simply be for the scenery that passes by the window. The Bohinj Railway in Slovenia, which was recently featured by Lonely Planet as one of “the best train journeys you’ve never heard of,” is just that kind of train ride – a trip that proves it can be more about the journey than the destination. After three days of hiking in Lake Bohinj, we couldn’t think of a better way to give our legs a rest than to hop aboard the scenic train in Slovenia – taking it all the way to the Italian border – just to get a firsthand look at the land.

The Bohinj Railway extends from Jesenice, Slovenia south to border town, Nova Gorica, with the original tracks continuing on from Nova Gorica to Trieste, Italy. The Austro-Hungarians created the train line, which was completed in 1906, to connect Trieste to Central Europe. However, after World War I, the train route lost importance and the border between Italy and Slovenia (then Yugoslavia) was closed. It wasn’t until Slovenia joined the European Union in 2004 that the Bohinj Railway was revived.

Building the tracks was no easy feat, as the route traverses through the Julian Alps and follows along the Baca and Soca Rivers. Tunnels had to be blasted through mountains and water crossings had to be created.  The Bohinj Tunnel, the longest on the route, runs four miles through Mount Kolba. The Solkan Bridge, a 720-foot-long stone bridge with a 280-foot arch spanning the Soca River, is the longest of its kind.

Since we were staying in Stara Fuzina near Lake Bohinj, we traveled to Bohinjska Bistrica, the closest train station on the route, to join the train journey to Nova Gorica. The roundtrip ticket for the scenic train in Slovenia – of which each segment takes about an hour and a half – costs about €12 (but is discounted 50% with the Bohinj Guest Card).

When our two-car train arrived at the station, we walked across the tracks and boarded the second car. We chose seats on the left side of the train (but later switched to the right…and then back again) and put the window down just as the train pulled away from the station. Within moments, we entered into the darkness of the 4-mile-long Bohinj Tunnel.

Once we emerged, we were treated to the spectacular vistas that were promised. We passed small Slovenian towns tucked into the hills, cut through wide, green pastures and crossed bridges straddling translucent teal water. In whichever direction we looked, we saw towering mountains, unless of course we were chugging through the middle of one in a tunnel.

Rather than sitting, I stood at the open window. The sun was warm, but the cool breeze – especially chilly when racing through the tunnels – rushed into the cabin. I alternated my time between savoring the passing scenes and taking what I hoped wouldn’t be blurry pictures, careful not to push myself too far outside of the window. When the train conductor approached me after already checking my ticket, I was certain he was going to ask me to take a seat, instead his face crinkled into a knowing smile as he asked, “Isn’t it beautiful?” Yes, yes, it is.

Along the route, we made stops at 10 stations – some of which looked more like the back yards of private residences than train platforms – before arriving at the final stop, Nova Gorica. In European terms, Nova Gorica is a new city, as it was built in 1947 after World War II when the new border was created between Yugoslavia and Italy. The line divided the metropolis of Italy’s Gorizia and the imaginary line that divided the countries was marked with a wall. What Yugoslavia gained was mostly suburbs and, in order to unify the suburbs into a city, Nova Gorica was built.

Our time in Nova Gorica was limited to less than an hour, but there was only one city sight we wanted to see: Trg Evrope – or Europe Square – which happens to be right outside the train station. It’s not a particularly large or decorated square and cars park right alongside it. It could easily be walked through without a second glance. The importance of the square, however, is that it is shared by both Slovenia and Italy; the border between the countries runs right through the center.

Our time in Nova Gorica was limited to less than an hour, but there was only one city sight we wanted to see: Trg Evrope – or Europe Square – which happens to be right outside the train station. It’s not a particularly large or decorated square and cars park right alongside it. It could easily be walked through without a second glance. The importance of the square, however, is that it is shared by both Slovenia and Italy; the border between the countries runs right through the center.

Until 2004, the wall separated the two countries; today, the wall has been replaced with just a few potted plants. As Italy and Slovenia are both part of the European Schengen Zone, people now can move freely between the two countries…or better yet, stand in both countries at the same time. After snapping our two-countries-at-once photo op, we stretched our legs with a quick walk into Nova Gorica’s city center before hurrying back to the train station to make the picturesque return trip back to Bohinj.

Before You Go To Slovenia

We want to know: Have you been on a scenic train in Slovenia? Where did you travel to? What is the most scenic train ride you’ve been on? Tell us in the comments!

12 thoughts on “Riding The Bohinj Railway: Scenic Train In Slovenia”