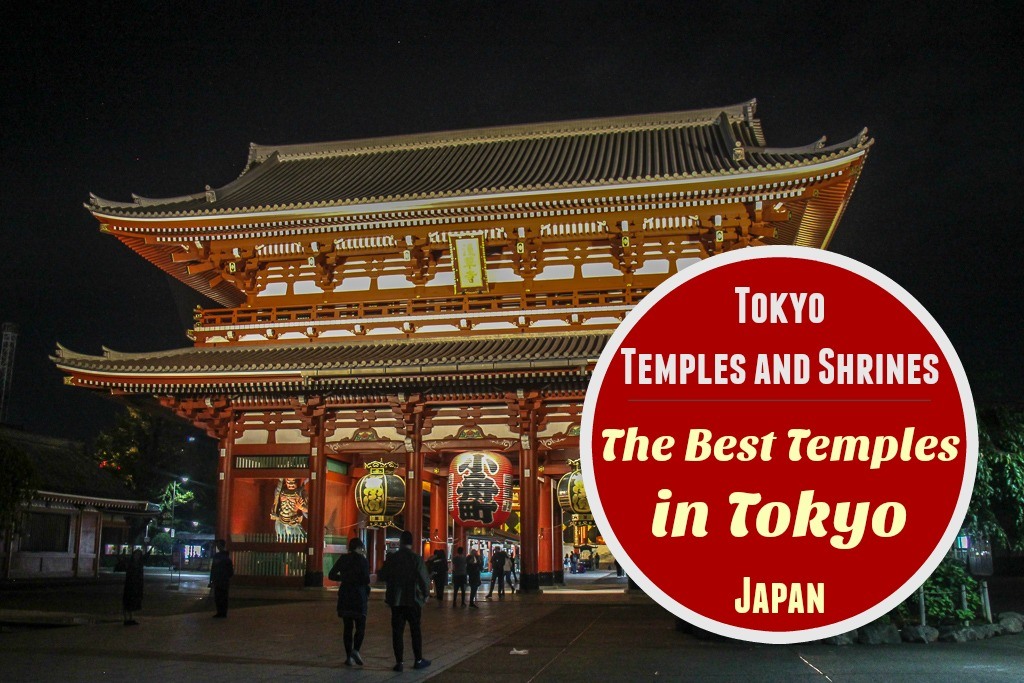 Tokyo, Japan is a sprawling city filled with numerous attractions, beautiful nature and scrumptious cuisine. Within the dynamic districts throughout the city are an incredible number of Tokyo temples and shrines – many of which rank as the top Tokyo places to visit. Many of the historic places of worship and remembrance are also top tourist attractions. During our time in the city, we were intent on seeking out the best temples in Tokyo.

Our guide of the 7 top temples to visit in Tokyo, Japan is broken down into sections: our recommended sites, popular sites that we didn’t visit and temple and shrine facts. In addition to the information we provide on the Tokyo temples and gardens, we have included a helpful Tokyo Temple map to help other visitors easily locate the sites. The information we provide in the post can be used as a travel guide; we encourage you to create your own Tokyo Temple Tour from the details provided.

Our list of the 7 must-see temples and shrines to visit in Tokyo include some of the most beautiful temples in Japan. However, we also include a few temples that are slightly off-the-radar for most tourists. We highly recommend that you add these Tokyo temples to your Tokyo attractions list!

The Meiji Jingu Shrine is one of the best shrines in Tokyo, both for its history and its surroundings. The must-see Tokyo shrine is dedicated to Emperor Meiji and his wife, Empress Shoken. Meiji Shrine (often incorrectly called the Meiji Temple) is located in the middle of a large, lush forest in the center of the city. Although Meiji ranks as one of the top shrines in Tokyo and is visited by many people, the popular shrine has a tranquil setting that exudes a serene atmosphere.

The unusual architecture of Tsukiji Hongan-ji Temple is both striking and grand – with intertwined influences of Asian, Indian and European religions. As one of the famous Buddhist temples in Japan, Tsukiji Honganji bears no resemblance to the classic Japanese temples found throughout the country. The temple’s origins date to the 17th century, but the structure was built in the 1930s. Inside, visitors are invited to light incense near the glittering gold altar – but should also seek out the stained-glass window and pipe organ – two items more likely to be spotted in a Christian church.

Sitting in the long shadow of the Tokyo Tower is the historic Zojoji Temple, which is a Buddhist temple in Tokyo, Japan that dates to the year 1393. The oldest structure at Zojoji Temple is the main gate, Sangedatsumon Gate, which was built in 1622; the gate is also the oldest wooden building in Tokyo. In addition to the temple, the Tokugawa family mausoleum and a museum are also on site.

The Hie Shinto Shrine Tokyo dates to the 15th century (although the current structure was rebuilt after being destroyed in World War II). Rather than a lion or fox, the monkey is the protector of the Hie Shrine – and because the monkey is believed to grant happy marriages and safe childbirth, many women come to Hie Shrine to pray. Although not a famous shrine in Tokyo, tourists come to see (and photograph) the picturesque tunnel of red torii gates that climb the stairs to the south (back) entrance to the temple.

Located in the Akasaka District, the Toyokawa Inari Temple is chock full of foxes…well actually, fox statues. It is estimated that there are more than 1,000 foxes and red-and-white banners at the temple in Tokyo, Japan. The foxes are said to protect the temple from evil. It might not be the most famous temple in Tokyo, but it is certainly unique! Frequented by athletes, actors, actresses and others in the entertainment industry wishing for success, Toyokawa Inara is an interesting temple for everyone to explore.

Nogi is not one of the famous shrines in Japan – but we think it is one of the must-visit shrines in Tokyo, Japan. The shrine grounds are both beautiful and eerie (due to the shrine’s history). The Nogi Shrine is dedicated to a couple – General Nogi Maresuke and Nogi Shizuko – who, upon learning of the Meiji Emperor’s death in 1912 determined the best way to honor the emperor was to join him in the afterlife. The couple committed suicide in their home to honor the emperor. Soon after their death, a shrine was built at their residence to memorialize their ultimate sacrifice.

Not only is Asakusa Sensoji the biggest temple in Tokyo, it is also the oldest temple in Tokyo. And, in our opinion, it is one of the absolute best temples in Japan – both because of its history and grandeur. If you only visit one temple in Tokyo, it should be Senso ji. The Asakusa Buddhist Temple was founded in the year 645 after fisherman found a statue of Kannon, goddess of mercy and pets, in the river and built the temple to worship it. The temple grounds are expansive and the complex includes multiple structures (most of which had to be rebuilt after World War II). Not to be missed are the Kaminarimon Gate, Nakamise-dori, the actual temple, the Sensoji pagoda and the Asakusa shrine.

The Kaminarimon Gate of Sensoji Temple is a landmark in the Asakusa District. Also known as the Kaminarimon Thunder Gate, the gate features a gigantic red lantern and is especially beautiful when illuminated at night.

Lining the path between the Thunder Gate and the Hozomon Gate is the 200-meter-long Nakamise Shopping Street. Vendor stalls (nearly 100 of them!) sell everything from incense to sweets to kitsch souvenirs.

Beyond the Hozomon Gate, in the inner temple complex, is the colorful main temple. As one of the most famous temples of Japan, there are almost always crowds at Senso-ji. In front of the temple is a small building where guests can get a Sensoji Temple Fortune. For 100 yen, fortune-seekers shake a stick from the box and match the number to the corresponding drawer where they withdraw an omikuji slip that reveals a fortune.

The five-story Sensoji Temple Pagoda sits next to the main hall. Picturesque any time of day, together the pagoda and Sensoji Temple at night are a beautiful sight.

The Asakusa Shrine – or Shrine of the Three gods – sits behind the temple to the east. The Japan shrine is dedicated to the three men who founded Sensoji Temple.

How To Get To Sensoji Temple

Note: While the Asakusa Temple opening hours are from 6:00am to 5:00pm, the temple grounds are always open. Visitors are free to roam the grounds and take in the sights any time of day.

Read More For Your Trip To Tokyo!

We were unable to visit these Tokyo temples during our visit, but they were included in our original list of temples to see in Tokyo – and are places we will be certain to visit on our next trip to Tokyo!

The Sengakuji Temple is a famous temple in Japan because it is the burial site of the “47 Ronin.” The story of the 47 Ronin is a famous tale of loyalty, sacrifice and honor.

Founded in the year 1274, Tennoji Temple features a bronze Buddha statue and ancient cherry trees. The temple sits next to Yanaka Cemetery, which used to be part of the temple complex.

Many people are familiar with the maneki neto – or beckoning cat – the cat figurine with one raised paw….and Gotokuji Temple is filled with them. Gotokuji is most certainly one of the more unique Tokyo Temples.

Narita-san Shinshoji Temple is one of the temples near Tokyo that has the designation of a National Important Cultural Property. The historic Tokyo Buddhist temple, which was founded in 940, is dedicated to the Fire god and features multiple structures within the complex.

The buildings at Nezu Shrine in Tokyo, Japan date to the early 1700s. It is considered to be one of the oldest shrines in Japan and is also one of the most beautiful for the garden setting (including a pond and paths) and torii gates.

The Imperial Shrine of Yasukuni is a Japanese shrine founded by Emperor Meiji and dedicated to Japanese soldiers who died in service. Visitors to the shrine will find a list of 2,455,532 men, women, children and pets (oh yes, even pets!) that have died for the country.

A historically important shrine, Kanda Myojin has origins that date to the year 730. Currently located in the Akihabara District, the shrine is often visited by techies who have their electronic devices blessed.

Visitors who want to spend time meditating at a temple should find a Zen temple in Tokyo. Check out this list of Zen temples in Tokyo where visitors can meditate in the traditional Japanese way. https://www.tsunagujapan.com/seven-best-place-to-experience-zen-meditation-around-tokyo/

Use this link to Google Maps to find you way to all of the Best Tokyo Temples!

Read these interesting facts about temples and shrines for your visit to Japan.

Difference Between Temples and Shrines

The words ‘temples’ and ‘shrines’ are not interchangeable; structures are either one or the other, but not both. That said, both shrines and temples can stand on the same complex grounds. A simple way to understand the difference is that Buddha is found in temples and gods are found in shrines. Another way to tell a temple from a shrine is that temples have large gates at the entrance that are often buildings themselves, while shrines have a torii gate, which is slender and plain.

In the modern age when the most famous temples in Japan have become the city’s top attractions, it is important for tourists to understand a few basic etiquette rules when visiting. Visitors who want to pray at Japan temples can light incense, bow slightly to the altar, toss coins into the collection box or ring the bell. Unlike most other religious buildings, there is no dress code to abide by when visiting temples and shrines in Japan.

Rather than spend the night in one of the area hotels, why not sleep in a shukubo?! Tokyo visitors looking for a unique place to stay can find accommodations at a temple or shrine. A temple stay, or Shukubo, offers guests the opportunity to participate in religious practices alongside monks and priests, such as meditation and eating traditional vegetarian meals.

Japan tourists visiting multiple temples may want to buy a Goshuin notebook. The book is stamped and decorated by monk’s artwork (for a small fee) at each temple visited. A goshuinchou makes a beautiful souvenir of a trip to Japan.

We Want To Know: Is there anything you would add to our list of Tokyo Temples and Shrines? What do you think are the best temples Tokyo? Give us your best tips and advice in the comments below!

Read More For Your Trip To Japan: Get ready for Japan with our detailed guides for the Best Places To Eat In Tokyo, Visiting Mt Fuji and the Five Lakes Region, Where To Drink In Tokyo and Visiting Kyoto, including the Best Kyoto Temples!

Start planning your trip to Tokyo, Japan! Search for the lowest airfares, the best accommodations and fun things to do…then start packing!  Want more travel planning tips? Head over to our Travel Planning page for more information and tips on traveling – and for country-specific information, take a look at our Travel Guides page!