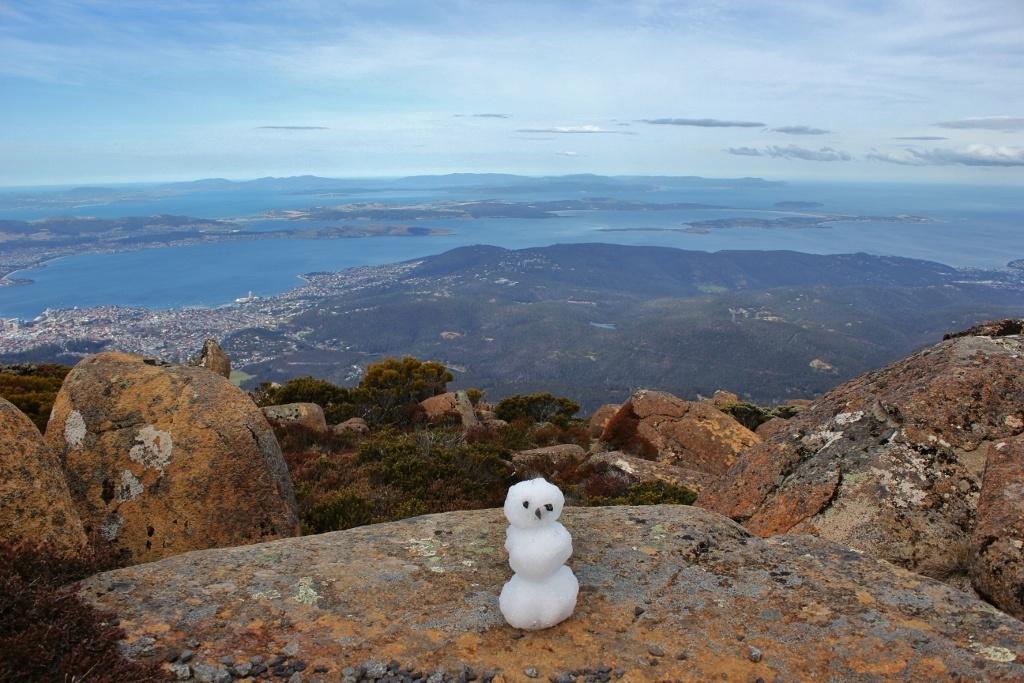 What goes up, must come down. And, when it comes to hiking, the down part is easy.  At least easier than up, anyway…but hiking down Mount Wellington in Hobart may be an exception.

In Hobart, Tasmania, Mount Wellington stands as a majestic 1270 meters and provides a sturdy backdrop to the city, guarding it from the elements. The unique columns of dolerite rock near the top, known as the Organ Pipes, remain from when the landmass ripped away from Antarctica. The peak, which is rather barren, had remnants of a late winter snowfall. 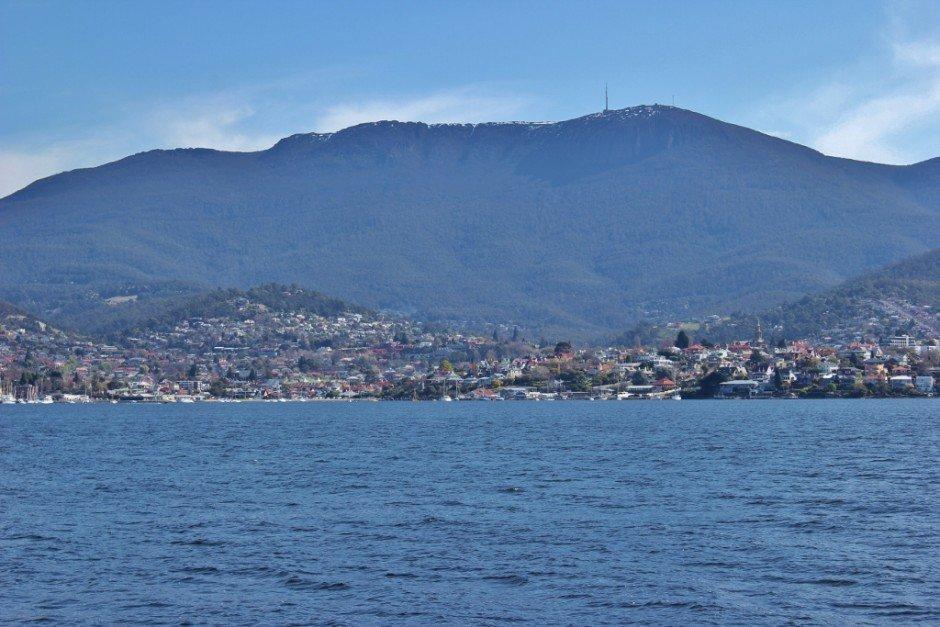 Hobart, Tasmania with Mount Wellington in the distance.

Our options to conquer the summit were limited. We didn’t rent a car for our weeklong stay, so to get to the top, we were either going to have to make the trek with our own two feet or take a shuttle bus. The roundtrip hike would take about six hours, but the shuttle bus only allowed for 35 minutes of time at the top. The compromise, which we thought was brilliant, was getting a one-way shuttle bus ticket up and hiking down Mount Wellington.

We bought our tickets from the tourist office and were promptly picked up at 1:30. The bus was full, but we learned that there was only one other passenger besides us who would be hiking down Mount Wellington. During the assent, the landscape changed drastically. Leaving suburbs behind, we became enveloped in leafy forest and then made the last stretch to the top above the tree line. From below, the snow looked like a mere sprinkle, but at the top it was more like a thick, patchy blanket. 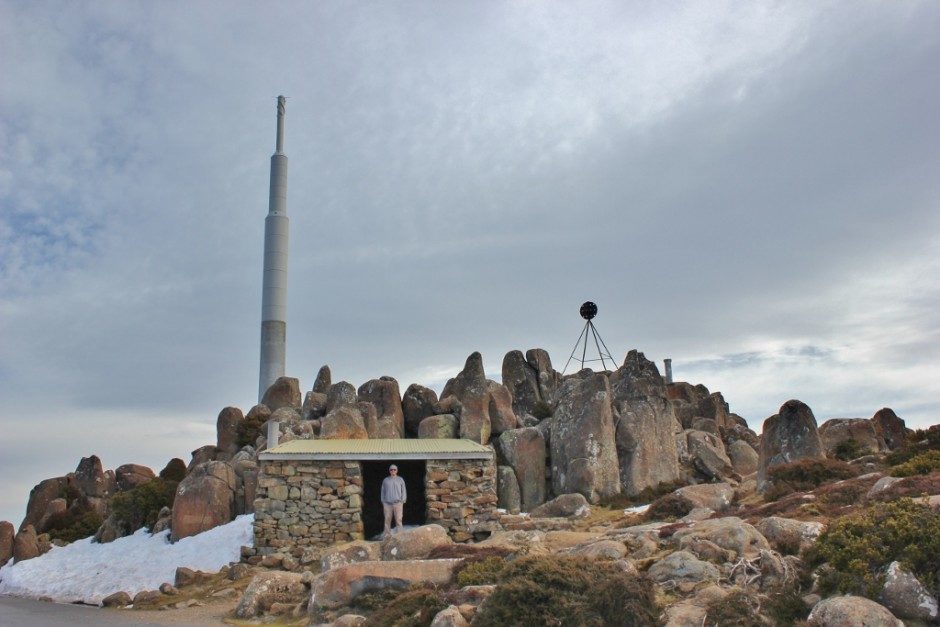 Kris at the summit.

Before we got out of the van, the driver handed me a Wellington Park Bushwalking map and casually mentioned that we should be aware of snakes, adding in that all snakes in Tasmania are poisonous. He quickly rattled off the names of the four trails that would take us down the mountain to Fern Tree, where we could pick up a public bus back into the city, and sent us on our way. Sounded simple enough, and we were off. 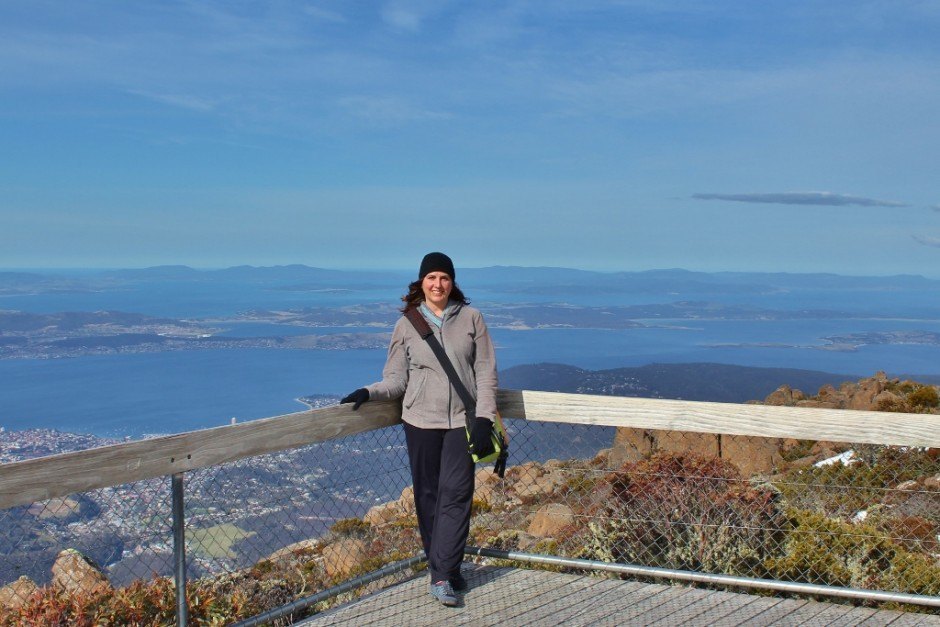 Taking in the view from the top before hiking down Mount Wellington.

I stepped out of the bus and was blasted with bitter cold wind that nearly took my hat off. I pulled on my gloves, tightened my scarf and Kris and I headed to the viewing platform. The city, river, islands and sea spread out below us like a painting. The view from the summit extended farther and was much more impressive than I had imagined it would be. Since we hadn’t seen snow in a really, really long time, we built a small snowman before we started hiking down Mount Wellington. 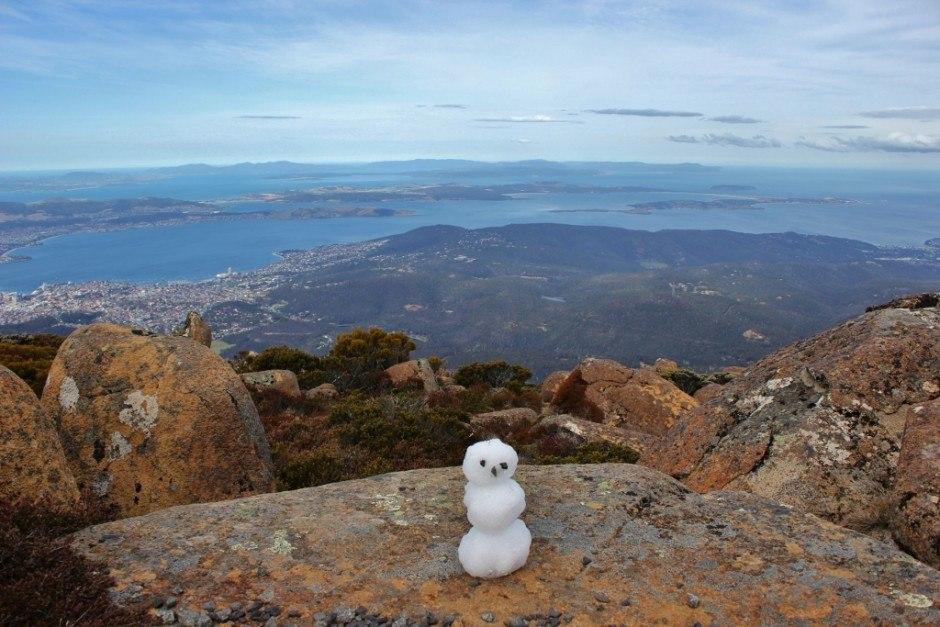 We set off on the Zig Zag Trail, slightly giddy that it was covered in snow. As the trail started sloping downward, the snow was eliciting fewer squeals of delight. After 10 minutes of sliding through terrain we were clearly unprepared for, the novelty had completely worn off. Without continuous rails or trail markers, we had no idea if we were on the trail at all and relied on previous footprints to lead the way. With the steep descent, howling wind at our backs and slick snow, we were on our rear ends as much as we were on our feet. 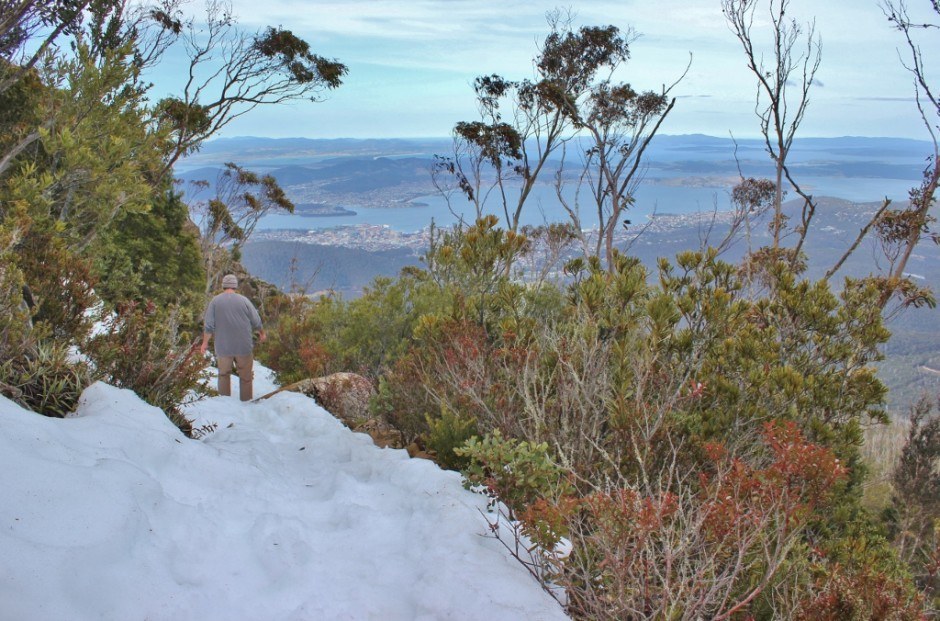 The snow covering the ground made it difficult to find the trail.

There was a point we were both ready to call it quits, head back to the summit and pay the additional amount for the shuttle driver to take us back down. But two things made us keep going: 1) we weren’t sure we could even hike up considering the difficulty we were having going down and 2) by the time we got back to the top, it was likely that the shuttle would have already left. We pressed on, occasionally stopping (when we had a solid foothold) to admire our surroundings. Besides our ragged breath and quivering leg muscles, tranquility had completely settled over the natural landscape. 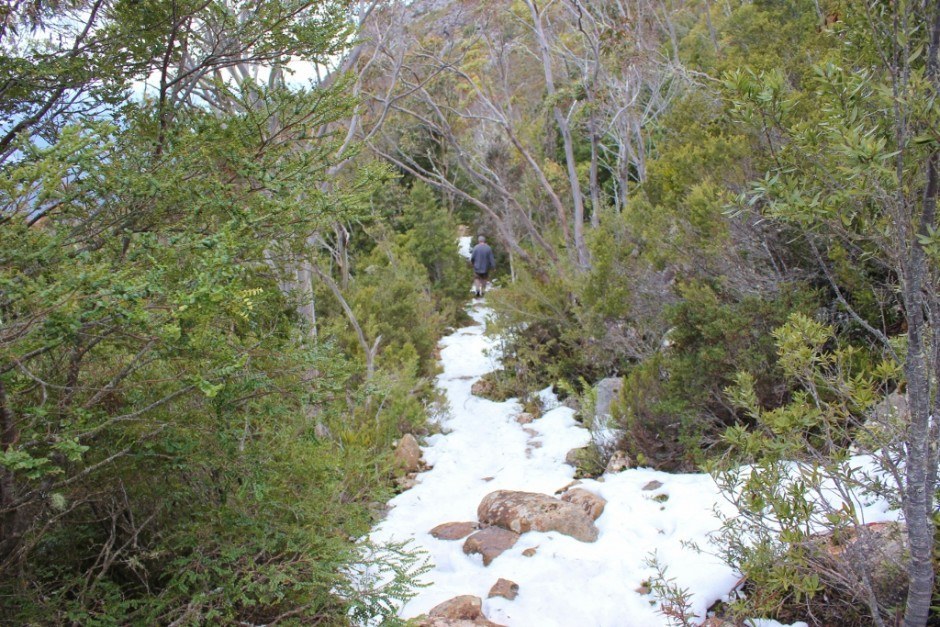 And, we’re still hiking in snow.

After 45 minutes of snowy slip and slide, we came to the end of the Zig Zag Trail and the end of the snow. We had originally planned to detour onto the Organ Pipes Trail at this point for a closer view of the dolerite rocks, but after the trying conditions of hiking down Mount Wellington thus far, we wanted to keep moving along. 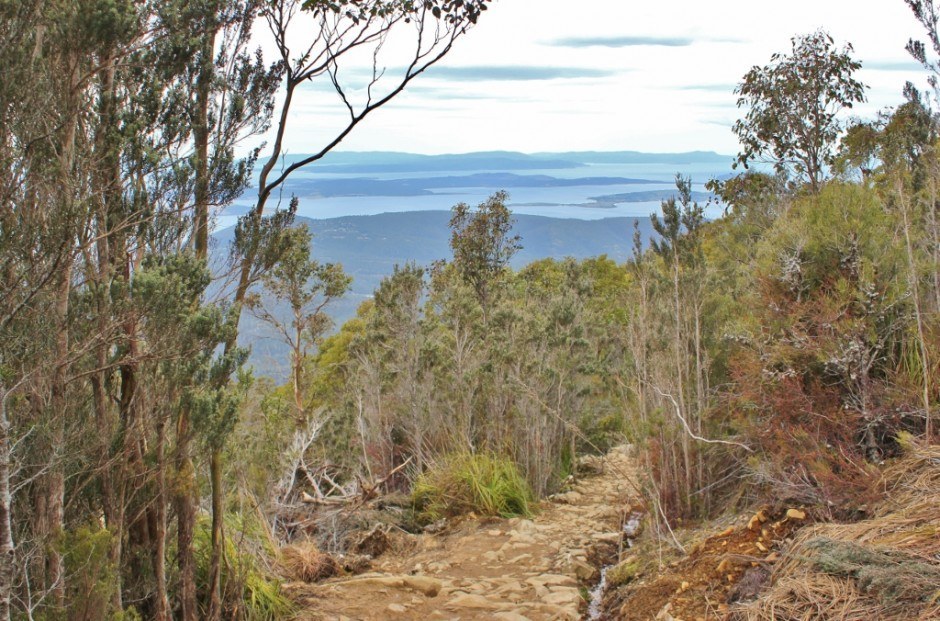 Once we had a clear trail, it was easier to appreciate the stunning views.

We merged onto the Pinnacle Trail, which was rocky and, in places, more of a gooey sludge than trail, but I have never been more excited for mud in my life. With renewed spirit in our steps, we quietly walked through the forest of Eucalyptus trees. Without worry of foot placement, our senses were free to wander. 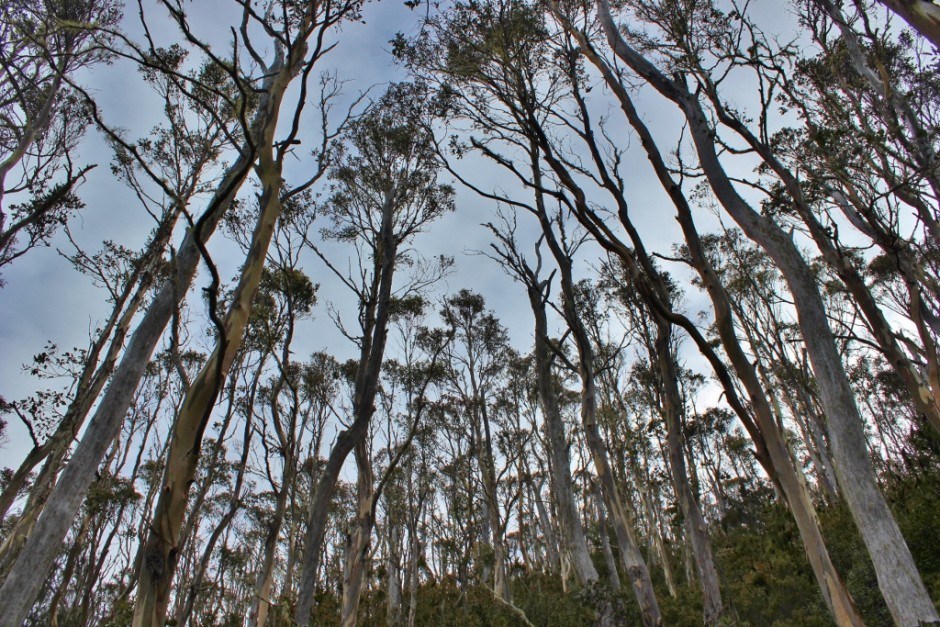 Tall trees enveloped us during our hike down Mount Wellington.

We smelled the pungent scent of damp earth and decaying leaves. On our faces, we felt a light breeze from wind that got tangled in the treetops. We could hear the trickle of snowmelt that flowed down the mountain next to the path and – sometimes – on the path itself. 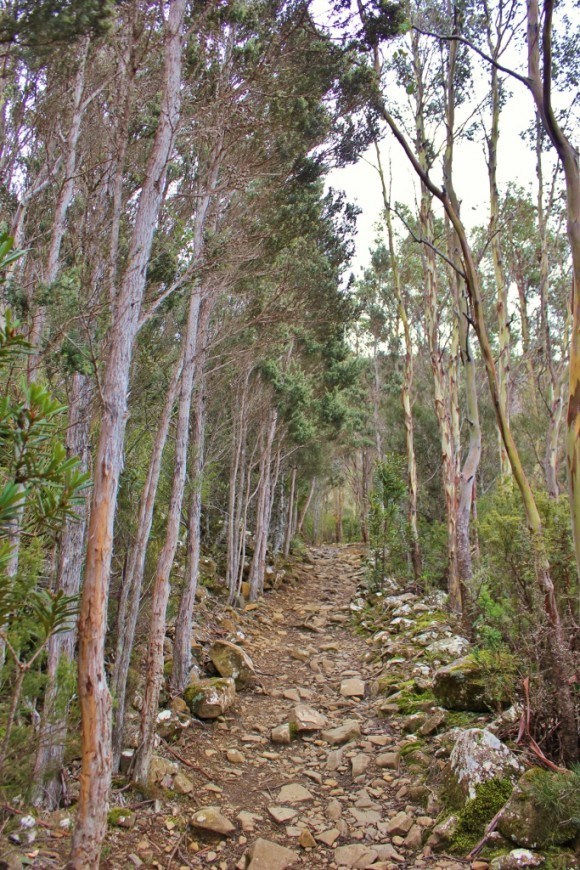 Looking back at the trail.

We listened to the noisy birds overhead and with any rustle of the bushes, we would stop and strain our eyes in search of the elusive Tasmanian Devil, but we never caught sight of one. Instead, we saw a few Tasmanian pademelons, a type of wallaby, feeding on grasses and plants. We passed no one and no one passed us and we wondered what happened to the other hiker from our bus ride. 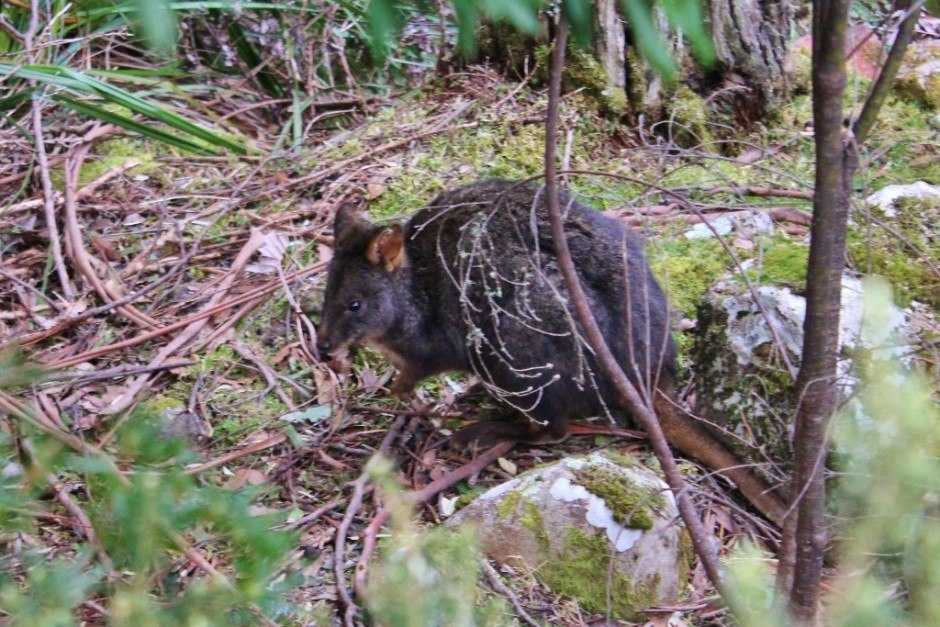 A Tasmanian Pademelon – better known as a Wallaby – we saw while hiking down Mount Wellington.

By the time we had descended to about 700 meters, we started hearing the hum of cars on the road we took to the top, which meant we had arrived at The Springs. We hiked to the lookout and were underwhelmed by the view that from the top was so much more remarkable, but when we turned around, we could see to the peak of Mount Wellington and were overwhelmed by how far we had hiked. 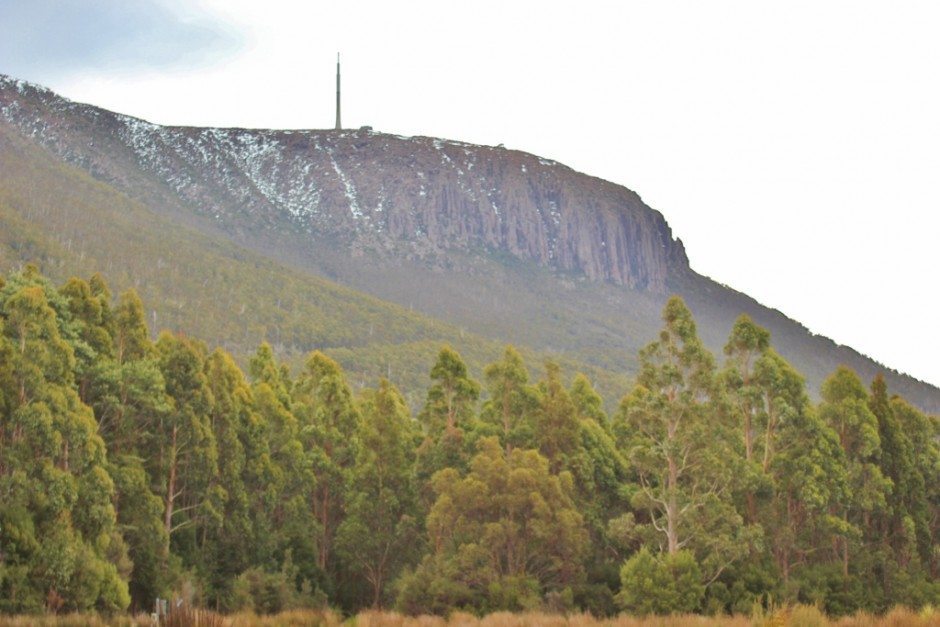 At The Springs, we got a good look back at how far we had hiked.

At this point, we were both ready for the hike to be over, but we had one section to complete. We picked up the Radfords Trail and connected onto Middle Trail. Hobbling, but not slowing our pace, we finally emerged from the woods to the glorious sight of the Fern Tree Tavern. At the bus stop, we checked the schedule and saw that the next bus into town was the last bus of the day. We had a 30 minute wait, but rather than standing at the stop, Kris proclaimed, “Let’s go pound some pints.” 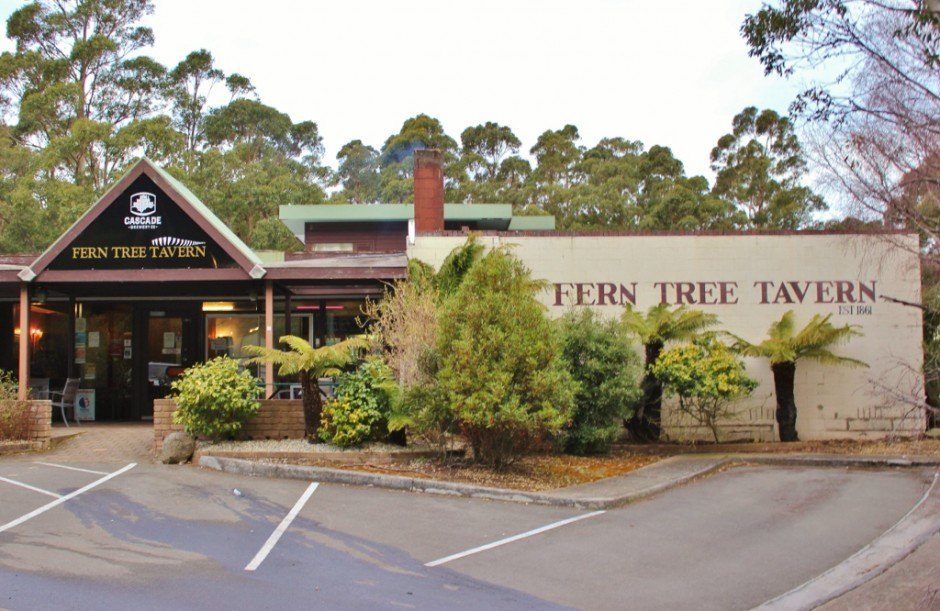 The Fern Tree Tavern was a welcome sight after our long hike down Mount Wellington.

Read about our Hobart Without a Car 5-Day Itinerary

We want to know: Have you ever hiked down Mount Wellington in Hobart? Did you do the round trip or just one way, like us? Tell us about your experience in the comments!

Also visiting Melbourne? Read our 21 Best Things To Do In Melbourne, Australia! 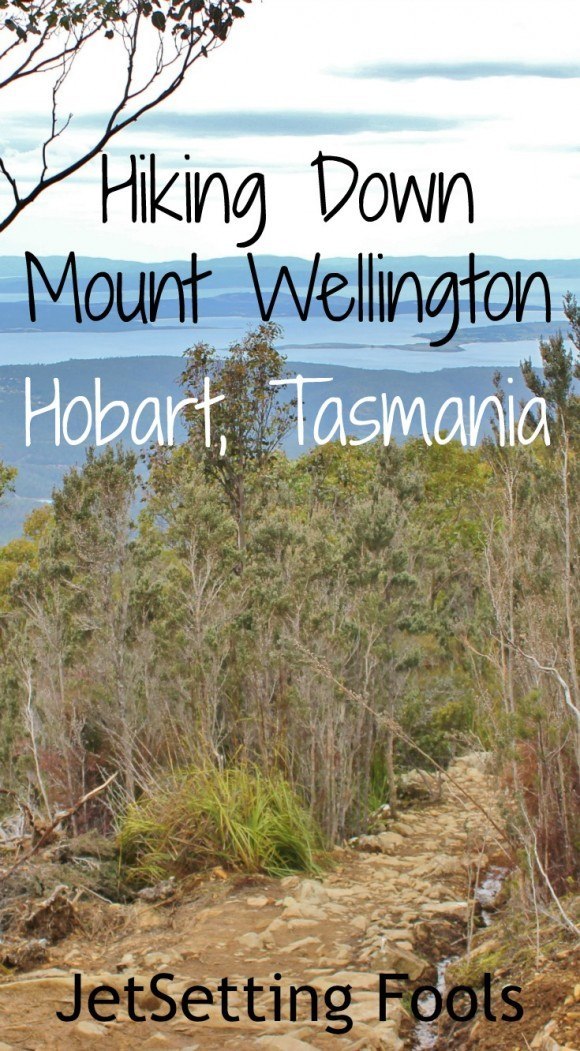 5 thoughts on “Hiking down Mount Wellington in Hobart”