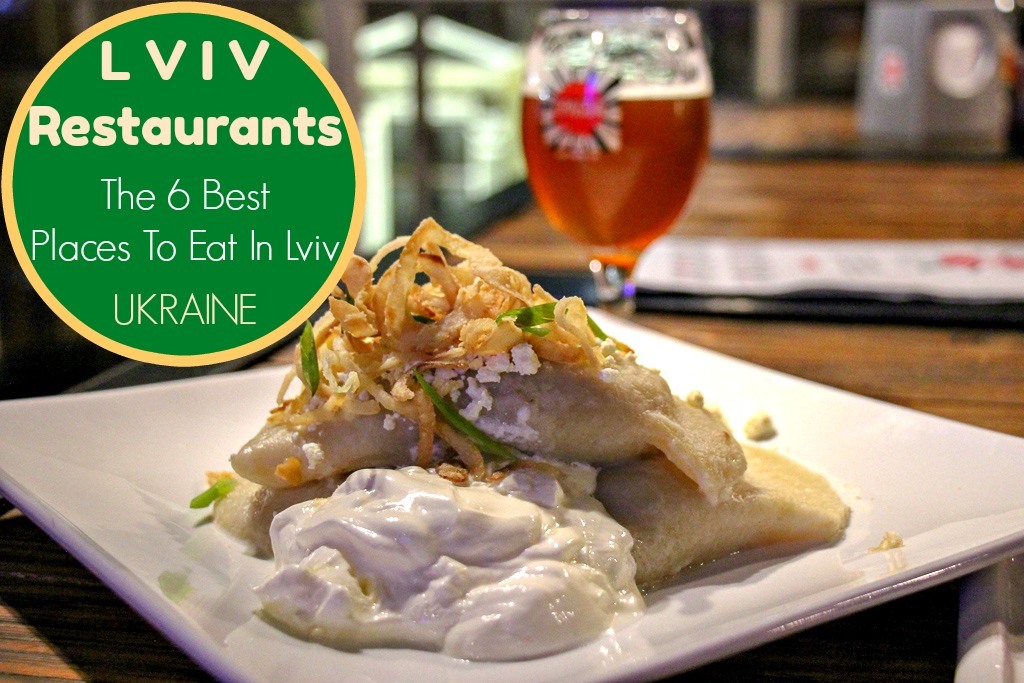 One of the things we like best about traveling is sampling local fare in foreign places. On our trip to Lviv, Ukraine, we were stoked about the food on offer. We sought out Lviv restaurants that serve classic Ukrainian dishes, like borscht, salo and varenyky. Our autumn visit aligned perfectly with the hearty and satisfying dishes. During our time in the city, we feasted on a variety of Ukrainian cuisine in the best restaurants in Lviv.

Tips For Eating At Restaurants In Lviv, Ukraine

Before we rattle off our list of must-eat places, we have a few tips about eating in Lviv.

Similar to many traditional Slavic dishes, the food in Lviv (and all of the Ukraine) has been influenced by neighboring cultures. The hearty dishes, which likely contain a rich meat and earthy ingredients such as potatoes, cabbage and mushrooms, are comfort food at its best. Some vegetarian meals are available though, too!

Traditional Ukrainian food is found on nearly every menu in the city, which makes it easy for foreigners to get a taste of local cuisine without too much effort. We’ve compiled a list of the Ukrainian dishes that we think every Lviv visitor should try!

Lviv restaurant prices are extremely affordable when compared to other parts of Europe. A three-course meal with alcoholic beverages at a nice restaurant can cost as little at $15 USD.

The most popular Lviv restaurants will fill up quickly. We recommend making reservations a day in advance – especially if visiting on weekends or holidays.

There are numerous restaurants in Lviv, Ukraine – and our list details the best places to eat in Lviv that serve classic cuisine and provide a unique experience. We have included links to Google Maps and TripAdvisor reviews for each location.

Located just steps from the main Rynok Square, Baczewski ranks as a top restaurant in Lviv – and our absolute favorite place to eat in the city. The candlelit garden setting, where orchids and ferns hang from the ceiling, exudes an elegant ambiance – and classy waiters in bow-ties complete the scene. The restaurant is named for the vodka-making Baczewski family and designed to relive the 1920s, when Lviv was a hotspot for wealthy Europeans. Traditional Galician dishes are cooked to perfection, but often with a modern twist and always presented stylishly.

The Baczewski menu features gourmet meat dishes, such as rabbit, duck and lamb, as well as classic dumplings and sausages. We highly recommend trying the homemade liqueurs and vodkas. And, don’t miss the desserts, which are served in a thick cloud of dry ice.

Top Tip: Baczewski is a popular breakfast spot, too. The all-inclusive breakfast buffet, which includes a glass or champagne or vodka, costs just 130 UAH (about $4.50 USD). Map  |  Reviews

Dining at Pravda Beer Theater is a Lviv experience that is not to be missed! Sitting right on Rynok Square and occupying four floors, the restaurant/brewery is a modern, industrial space with an open kitchen and a stage for live bands. Every night (except Mondays) a musical act takes the stage to entertain the crowds, playing everything from traditional Ukrainian songs to international pop music. While the band attracts many patrons, the food is a big hit, too (which also happens to pair perfectly with their range of craft beers).

We ate at Pravda multiple times during our stay, trying an assortment of dishes from the meat-heavy menu. Bograch stew, braised beef shank and Galician schnitzel were among our favorites – and we wandered out of comfort zone and tried the smoked pork ears, which were…interesting.

Top Tip: The Pravda Orchestra takes that stage at 7:00pm. Arrive before the band starts if you want a good seat. Map  |  Reviews

Located on a quiet street in the city center, Facet is a small, cozy establishment with friendly service. The brick-walled interior can only accommodate a few diners, but there is plentiful seating outside. The range of local cuisine is thoughtfully presented. A few of our favorite things to eat at Facet include salo (thinly sliced fatback), sausages and deruny (potato pancakes with sour cream).

Found down a narrow passage near the Opera House, Ukrayins’ke Podvir’ya is a traditional restaurant set in an old wooden house. The menu features Ukrainian cuisine using time-honored recipes and fresh ingredients. In addition to the food, the restaurant has a long list of spirits and a range of local beers on the menu. Among our favorite dishes at Ukrayians’ke Podvir’ya were the Ukrainian Borsch (served in a bread bowl with sour cream), potato varenyky and pelmeni meat dumplings.

Top Tip: The restaurant is open until 10pm, but the kitchen closes an hour earlier. Map  |  Reviews

Kumpel is another brewery and restaurant – the first in Lviv they claim – with a beer hall vibe. Tanks sit in the center of the ground floor dining area, while tables fill the basement level. The extensive menu has an array of dishes, many of which can be shared – making Kumpel an ideal spot for visitors and groups who want a little taste of everything. We highly recommend trying one of the meat platters and the pan-fried dumplings.

A classic Ukrainian restaurant (similar to the Milk Bars in Poland), Puzata Hata is a good option for a quick, cheap meal of authentic Ukrainian fare. The cafeteria dining hall has no stated menu; instead, the counter is stocked with a selection of fare which is displayed buffet-style. Diners line up at the counter and fill their tray, then pay at the cashier stand. The home cooked-style food is basic, very filling and the canteen environment is a true Lviv experience.

All of our recommended restaurants are located in central Lviv and can be reached on foot. Use this link to Google Maps for a map of our list of recommended Lviv restaurants.

One of the odd attractions in Lviv is the incredible number of themed and creative-concept restaurants. The !FEST company is a driving force behind the unusual eateries – which include an underground coffee mine café, a gas lamp museum restaurant and – the most famous – a military bunker that requires a password for entry. Although we only included one of their establishments (Pravda Beer Theater) on our list of must-eat restaurants in Lviv, we do recommend popping into one or more of these fun spots – for at least a drink. Top Tip: It is important to understand that these places are meant to play on emotions and usually come with a twist. What most guests will also notice is that they all come with gift shops.

Finding Kryivka is half the fun – as there is no signage and the website lists the official address as “Somewhere at Rynok Square.” Guests who find the unmarked door cannot enter until they give the secret password “Slava Ukraini!” (Glory to Ukraine!) to the armed soldier and take a shot of vodka. Patrons then find their way through the dimly lit bunker to one of the many rooms for a meal or drinks.

The Most Expensive Galician Restaurant Lviv

The Most Expensive Galician Restaurant comes with several surprises – from how to get in to how much it will cost. We don’t want to ruin all the fun, so if you are intrigued, you will just have to go and find out for yourself.

A seven-story chocolate factory in the center of the city, Lviv Handmade Chocolate sells an array of sweets. There is a cafe on-site offering pre-packaged chocolates that make great gifts.

A Lviv cafe with a quirky twist: it’s in a ‘mine.’ Strap on a hard-hat and take a tour then enjoy a steaming cup of Joe.

An old post office has been transformed into an pasta restaurant. The walls are decorated with post cards that tell the history of Lviv.

The kerosene lamp was invented in Lviv – and now the Pub-Museum Gas Lamp hosts the largest collection of gas lamps in Europe.

Once upon a time, a short river flowed through the center of Lviv, which was fantastic until it was polluted and undesirable. At the turn of the 20th century, it was decided to ‘bury’ the river – rerouting it through the sewer system – and the last piece of river was covered for the city’s now-famous Opera House. The Poltva River still flows beneath the surface and the Left Bank Opera Underground restaurant sits next to it.

Visitors, who just want to grab fast food on the go, have numerous options in Lviv. There are several kebab kiosks on city corners and near parks. There are many places that sell pizza-by-the-slice (and most Lviv pizza slices cost less than $1 USD). A popular Lviv café that makes small sandwiches and sweet treats is Lviv Croissants. It is incredibly popular and has grown to many locations across Ukraine.

You can find information about Lviv hotels and accommodations, flights to Lviv and other Lviv tourist information in our detailed guide to Lviv: Things To Do in Lviv, Ukraine!

Start planning your trip to Lviv, Ukraine! Search for the lowest airfares, the best accommodations and fun things to do…then start packing!  Want more travel planning tips? Head over to our Travel Planning page for more information and tips on traveling – and for country-specific information, take a look at our Travel Guides page!

We Want To Know: What is your favorite Lviv Restaurant? Give us your advice and opinions on the best restaurants in Lviv in the comments below!