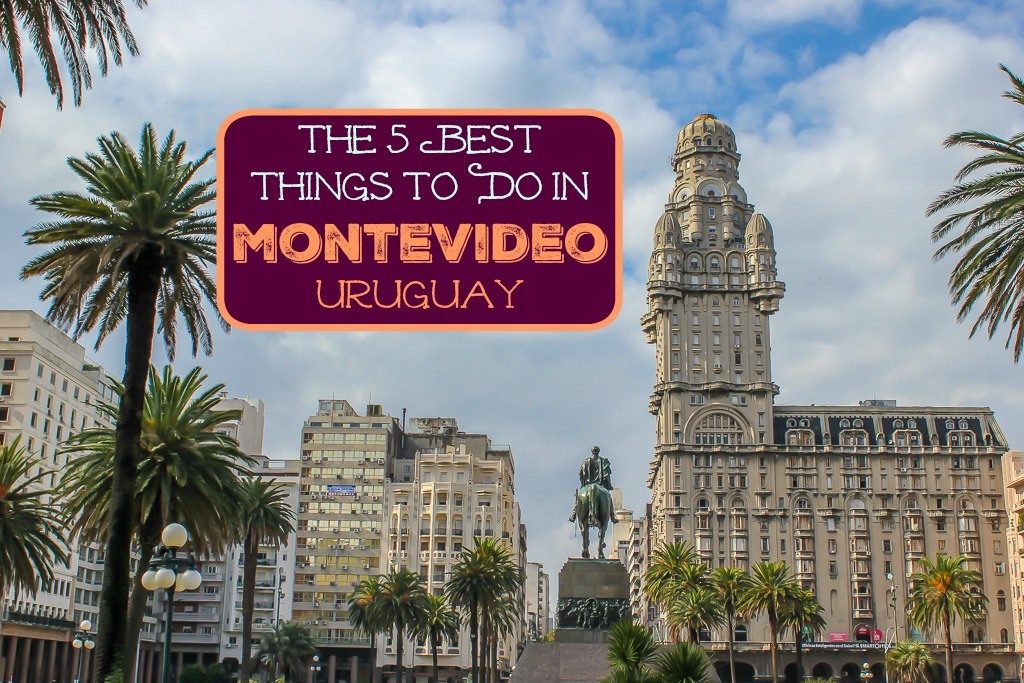 Montevideo, the thriving capital of Uruguay, is situated on the banks of the Rio de la Plata where the river empties into the Atlantic Ocean. The South American city, which was founded in 1724, is home to one-third of the country’s population and is the cultural center of Uruguay. Touted as one of the best places to visit in Uruguay, we spent 4 days in Montevideo exploring the city before heading to the beautiful Uruguay beaches on the eastern shoreline. During our visit, we discovered the best things to do in Montevideo, Uruguay.

Best Things To Do in Montevideo

Our list includes our top tips of what to do in Montevideo. We also include a link to a helpful map of sights at the end of the post – as well as other useful information about getting to Montevideo and where to stay.

Save, Pin or Bookmark this Monevideo Visitors Guide so that you can access it as you plan your trip to Uruguay!

#1 Admire the Architecture on Plaza Independencia

The city’s main thoroughfare, Avenue 18 de Julio, runs from the Estadio Centenario football (soccer) stadium in the east to the historic Plaza Independencia. The historic square is a Montevideo must-see! Featuring grand architecture and historic sites, the square marks the entrance into the Montevideo Old Town.

Marking the east end of the square is the hard-to-miss 26-story Palacio Salvo, which is one of the most famous buildings in Uruguay. The 330-foot-tall building was completed in 1928 and – at the time – was the tallest building in Latin America. Inside the building, visitors will find the Tango Museum.

At the center of Plaza Independencia is an enormous equestrian statue of Jose Artigas, the man who is credited with liberating Uruguay in the early 1800s. A mausoleum containing his remains, which is guarded by soldiers, sits beneath the statue.

The Puerta de la Ciudadel – or Gateway of the Citadel – stands on the west end of the square. It is the only remaining portion of the city walls (the rest were dismantled in 1829) that once surrounded the Old Town.

On the southwest corner of Plaza Independencia is the historic Teatro Solis. The theater first opened in 1856 and is still used for performances of opera, ballet, concerts and plays.

The charming Plaza Constitucion is the oldest square in Montevideo. Rather than an open plaza, a park is found at the center. The cafes that ring the square spill out onto sidewalks and – on the west side of the square – is the city’s cathedral.

The Catholic Catedral Basilica de Montevideo or Iglesia Matriz – Montevideo Metropolitan Cathedral or Mother Church – was built in the late 1700s, when the city was a Spanish colony. Declared a cathedral in 1878 and a Basilica in 1897, the church is one the National Historic Uruguay Landmarks.

#3 Walk the Rambla on the Rio de la Plata

The Rambla – a nearly 14-mile-long sidewalk – follows the coastline around the city…and strolling along the Rambla is one of the top things to do in Montevideo. Both visitors and locals use La Rambla for a variety of activities. Along the path (which can be used for walking, running or biking), there are areas for fishing, sunbathing and plenty of places to sit down and enjoy the view.

One of the top things to do in Uruguay is a visit to the beaches (it was precisely that reason we took our trip to the country!) – and you don’t need to leave the capital city to hit the sand. Although the best beaches in Uruguay (like Punta del Este) are located outside the Montevideo city center, there are easily accessible beaches in Montevideo via La Rambla. Although not a short walk, Playa Ramirez (Ramirez Beach) is about a 3-mile walk on the Rambla and the more popular Playa Pocitos (Pocitos Beach) is about 5.5 miles from Old City Montevideo.

#4 Take a Day Trip from Montevideo to Colonia del Sacramento

Spending a day in Colonia del Sacramento is one of the best day trips from Montevideo. As one of the well-preserved cities in Uruguay, the historic old town has been dedicated a UNESCO World Heritage site. The quaint town sits on the north bank of the Rio de La Plata across from Buenos Aires.

Things To Do In Colonia, Uruguay

Get acquainted with the city with our list of recommended Colonia, Uruguay things to do. Note: Colonia sights are not featured on our Montevideo map; use this Google Maps link instead.

Top Tip: Visit Colonia with a guide on an organized tour from Montevideo. Get the details here!

The Mercado del Puerto was constructed using an iron framework in the mid-1800s. When the Port Market opened in 1868, vendors sold fresh produce and meat. Frequented by famous musicians, writers and politicians, Mercado del Puerto slowly evolved into individual eateries, rather than a marketplace.

Today, the market is one of the top Montevideo tourist attractions. Visitors can sample a range of local food from various restaurants inside Mercado del Puerto. Highly recommended are the grilled sausages, empanadas and the Chivito sandwich.

Find out more in our blog post, What to Eat in Montevideo.

Use this link to Google Maps that highlights our recommended Montevideo sights.

Want more tips of what to do in Montevideo, Uruguay? We haven’t personally visited these sites, but they are rated as some of the best places to visit in Montevideo by fellow travelers. Add one – or more! – to your Montevideo sightseeing adventure!

Want a guide to lead the way to top Montevideo attractions while you learn about the history of the city? Join one of the highly-rated Montevideo tours! Visitors can book a popular Montevideo bus tour on Viator. Visitors can also hire a private guide for a Montevideo city tour that includes the highlights of the city and an optional wine tasting. Find out more here!

How Many Days in Montevideo?

We really enjoyed having 4 days in the city, but tourists with less time can still experience the city!

What To Do in Montevideo in One Day

Visitors with only one day in Montevideo will have some limitations on what they can see…but they can still see a lot! We recommend spending the day sightseeing Montevideo city center and, if time permits, enjoying the beach for a few hours. On the other hand, visitors could book one of the private Montevideo, Uruguay tours to see sights further afield.

What To Do with 2 Days in Montevideo

It is possible to tick off all our recommendations for the Best Things To Do in Montevideo in just two days. Visitors will need one day for Montevideo activities and one for a day trip to Colonia.

Getting to Montevideo, Uruguay

Montevideo can be reached by plane, bus or boat, making it easy to get to from other countries in South America and beyond. We arrived via a flight from Miami, used a bus for our day trip Colonia and departed via boat to Buenos Aires.

The Carrasco International Airport (MVD), which is located northeast of Montevideo, is the largest airport in Uruguay. The airport is serviced by major airlines, including American Airlines, LATAM, Iberia and Avianca. Start your search for the best price on flights on SkyScanner. You can book private transfers from the airport into the city center in advance on Viator.

The main Montevideo bus station is Tres Cruces Terminal. International, regional and local routes depart/terminate at the station. Many tour buses also use Tres Cruces. Buses are an affordable method of transport in Montevideo. Visitors can catch a Direct bus to Colonia del Sacramento or the bus to Punta del Diablo from the main station. The buses used for longer trips are impeccably clean, have comfortable  reclining seats and often offer free wifi.

Where To Stay in Montevideo

We think Barrio Sur is the best area to stay in Montevideo. The district is near the city center, Ciudad Vieja and the coast. During our Montevideo visit, we stayed in mid-range accommodations at Hotel Iberia (where the rooms were clean and the staff was friendly). There are numerous accommodation options when it comes to Montevideo Hotels and Airbnb Apartments which are priced for a range of budgets.

We recommend you start your search for accommodations in Montevideo on Booking.com – like we do!

Top Tips For Your Trip to Uruguay

Start planning your trip to Montevideo, Uruguay! Search for the lowest airfares, the best accommodations and fun things to do…then start packing!  Want more travel planning tips? Head over to our Travel Planning page for more information and tips on traveling – and for country-specific information, take a look at our Travel Guides page!

Also Traveling To Argentina? Be sure to read our top tips in these complete guides to Buenos Aires and Bariloche!