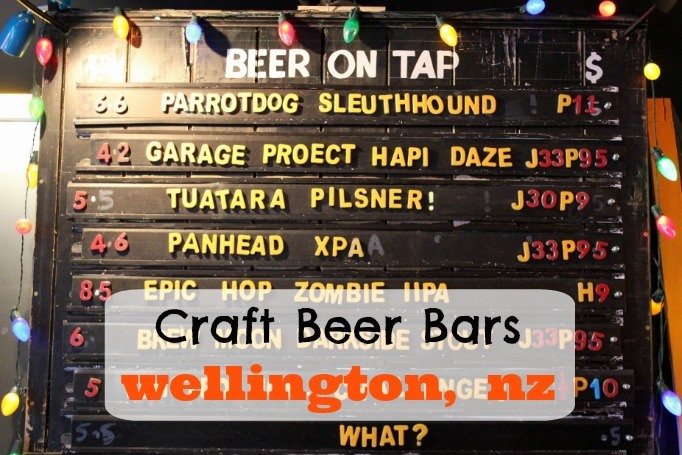 As if there isn’t enough to love about Wellington, New Zealand – like the scenic landscapes and cool city vibes – we’ve got another reason: Wellington Craft Beer Bars. In fact, Welly is known as the Craft Beer Capital of New Zealand – and for good reason. In the last 2 decades, Wellington has seen a surge of local breweries start production and dedicated craft beer pubs have popped up all over the Welly CBD. During our stay, we navigated our way to some of the best bars in Wellington serving New Zealand craft beer!

In conjunction with the list, we used recommendations from locals (and brewers) to create our ultimate craft beer tour of Wellington. Rather than being rushed, we spent two weeks sampling suds from the top-rated New Zealand microbreweries. Visitors with less time may want to consider joining a Wellington Pub Crawl or Brewery Tour (find out more here!)

Our recommended list includes both NZ craft from the source and the best pubs in Wellington. Because we prefer drinking direct from the brewery, we have separated our list into Wellington, New Zealand Craft Breweries and Welly Craft Beer Pubs. For each place listed in our NZ craft beer guide, we include a link to additional information; such as maps, reviews and websites.  At the end of the post, you will also find a link to a helpful craft beer Wellington NZ map.

Save, Bookmark or Pin this post so that you can easily access it during your exploration of Wellington NZ Craft Beer!

Our Wellington Beer Trail led us to four local NZ microbreweries where we could sip the latest production of brew on-site.

A new comer to the Wellington, NZ craft beer scene, Mean Doses is receiving a warm welcome and making some of the best craft beer in Welly! They’re brewing up tasty ales (Mean IPA), as well as some unique creations (Dark Star, a peanut chilli porter). We can’t wait to check this place out for ourselves, but in the meantime please feel free to drop a review for us in the comments! Website

The Garage Project is a true success story of three guys who just wanted to brew good beer. Since their first location on Aro Street, the brewery has grown to include two other locations (and they are even dabbling with creating Wellington wines!). The original Garage is still an operating brewery – and open to visitors for samples and take-away beers (both in the bottle and by growler).

As we sipped the range of Garage Project beer on offer, the friendly staff offered advice on other must-try local brews, as well as a bit of history and politics about the Wellington craft beer scene. Map and reviews.

The first time we visited Parrotdog was when they had a small-operation brewery offering samples, single bottles and growlers. Expanding to a new location outside the CBD, the brewery produces their standard lineup of beers, as well as a range of experimental brews. The new retro-diner space offers a food menu alongside the beers. We recommend trying the BitterBitch IPA – it was the first (and in our opinion, still the best) Parrotdog brew. Map and reviews.

The Fork and Brewer restaurant brewery aims to do exactly as its name indicates: pair good food with great beer. Guests enter the establishment via stairs that offer a glimpse into the brewing process, and in-use casks and kegs. The bar encircles a giant barrel that features 40 taps of Fork and Brewer beers – with room for a few guest beers, too. We liked the open space (with outdoor seating, too!), friendly atmosphere and unique bathroom décor.

It was difficult to choose a favorite at Fork and Brewer – there is so much to choose from! In addition to the draft beer options, there is a selection of bottled beers from notable craft brewers like 8 Wired, Epic and Hallertau. Map and reviews.

Our quest for good craft beer led us to some of the best bars in Wellington, NZ. The following were a few of our favorite pubs we stumbled into on our Wellington craft beer tour.

A hidden gem, Little Beer Quarter – or LBQ – is a must for beer lovers. The retro furnishings made it feel like we were hanging out at a friend’s house, but the beer-bottle-lights and brewery coasters hanging on the wall reminded us we were actually in a bar. The hip space is what drew us in, but the reason we kept going back was because of their excellent selection of craft beers. (LBQ is where I had my absolute favorite NZ beer: Hallertau Maximus Humulus Lupulus India Pale Ale…don’t try to say it after you’ve had one.) The small space also features a fun weekly lineup of events. Map and reviews.

We dig dive bars…especially dive bars with craft beer on tap! The mish-mash décor – Christmas lights, Star Wars action figures and funky art – compliment the fun, chill atmosphere of the hole-in-the-wall bar where it is hip to be geek. And, as beer geeks, we were certainly impressed by the craft beers on offer! Map and reviews.

Pioneers in New Zealand’s craft beer scene, Mac’s has been around since the 1980s. Hailing from Auckland, the brewery has opened a slew of Mac’s Brewbars around the country – including one in Wellington wharf. We couldn’t resist checking out the waterfront brick warehouse tap room. With a focus on nature-made beverages, they offer a range of beers, ciders and sodas. Map and reviews.

Featuring local and international beers on tap (and more in the bottle), Cocos has a little of something for everyone (including wine, ciders, whiskey and cocktails). The barstaff is helpful in recommending brews – and the menu features classic pub grub with an Asian flair. Map and reviews.

A classic Kiwi pub, The Old Bailey is a taproom for NZ beer legend, Monteith’s Brewing – a brewery that has been in production for more than 150 years. Their classic beers include ales, pilsners and lagers, but their batch-brewed selections are more creative with several IPAs. Located close to the train station, The Old Bailey is a perfect first – or last – stop in the city. Map and reviews.

Just north of Wellington is the small community of Petone, Speight’s Ale House tap room serves tasty brews from the Dunedin brewery in a tavern-like atmosphere. Website. The Queen of Jackson is a chic spot that features a rotating variety of NZ craft beers, including favorites by Founders and Boundary Road. Website.

Use this link to Google Maps to find all of our recommended Wellington, New Zealand Craft Beers!

Try as we might, we couldn’t make it to all the craft breweries in Wellington! These craft beer bars in Wellington also come highly-rated by fellow beer lovers!

One thing to note about microbreweries in NZ: the beer is not cheap. Happy hours are few and far between, but keep an eye out for them!

Beervana, the craft beer festival in Wellington, takes place in August every year. The festival features more than 50 brewers and gourmet food. Tickets – of which there are numerous options – go on sale in June. Stay up-to-date on information via their official Beervana website.

Looking for more Wellington things to do (besides drinking beer!)?

Check out our list of Free Things To Do in Wellington.

Where To Stay In Wellington, NZ

During our visit to Wellington, we stayed in an Airbnb Apartment. However, for those who prefer staying in traditional accommodations, there are many hotels to choose from in – or close to – the Wellington city center.

Our Top Tips For Your Trip To New Zealand

Want more travel planning tips? Head over to our Travel Planning page for our complete packing list and other travel resources!

We want to know: What are your favorite Wellington Craft Beer Bars? Any we should add to our list? Give us your best tips and advice in the comments below!

One thought on “Craft Beer Wellington: The Best Bars In Wellington, NZ”