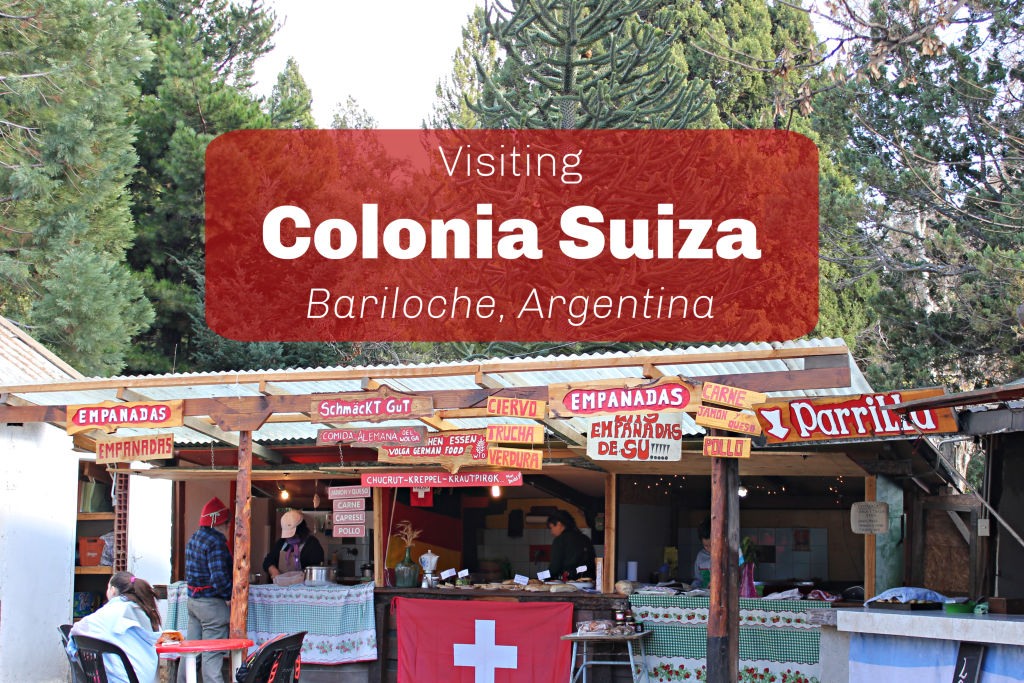 The historic village of Colonia Suiza in Bariloche, Argentina has long been a tourist destination for visitors. Located along the famous Bariloche Circuito Chico sightseeing route, the small cluster of dwellings and restaurants is fairly easy to reach by car or by bus. Colonia Suiza Bariloche exudes a hippie vibe and the settlement is best known for their art crafts fair, Feria Colonia Suiza, and signature food, El Curanto.

Colonia Suiza – or Swiss Colony – was settled in 1895 by a Swiss family, named Goye.  The Goye family -originally from western Switzerland, had been living for 10 years in Chile. When the Argentinian government began offering free land to settlers who promised to develop it, the Swiss family made the move to the area.

The pioneers built typical Swiss-style chalets near the southern shore of Lago Perito Moreno at the base of Cerro Lopez hill. Along with the architectural style, they brought their traditions…and chocolates. Soon after, a few Germans followed suit and settled on nearby parcels of land…and they brought the beer. Many of the same families have occupied the land for generations.

The Colonia Suiza Brailoche Feria Artesanal is the village’s craft fair where they sell their homemade wares to visitors. Jams are popular items at the Colonia Suiza art market, which are made from berries that grow in the area. Other items we saw for sale were local wines, honey, jewelry and wood carvings. Note: We have heard that recently, many of the goods sold at the Colonia Suiza Bariloche Feria are no longer handicrafts made by locals, but mass-produced tourist trinkets.

In addition to the goods for sale, the Feria Artesanal Colonia Suiza Bariloche also boasts an open-air food court featuring local cuisine. We found booths selling parrilla grilled meats, empanadas, goulash-type stew and some of the only tacos we’d seen since being in South America.

German fare was also available and was prepared by a girl who introduced herself as a granddaughter of an original German settler. Another booth had an assortment of homemade baked goods. While the food on offer is certainly delicious (we tried the empanadas and several baked goods), most visitors come to eat the famous Colonia Suiza Curanto.

So, what is El Curanto? Curanto is a traditional feast that is prepared by cooking meat and vegetables underground. Emilio Goye, one of the original settlers, began the tradition of cooking curanto in Bariloche in the 1930s. The extravagant meal was often prepared for celebrations – and the preparation has now become a ceremony itself.

How They Prepare Curanto In Colonia Suiza

As the food is cooked underground, the first step in cooking El Curanto is digging the hole in the ground at a depth of about 6 inches. Hot stones, which have been heated in an oven or by fire, are laid on the floor of the hole and covered with leaves, which give the food a distinct smoky, earthy flavor. The raw food is placed on top and is then covered in another layer of leaves, a tarp and dirt. When smoke starts coming up from the ground, the feast is ready.

Traditionally, there are five meats and five vegetables that are cooked in El Curanto. The meats usually include beef, lamb, pork, chicken and sausage. Typical vegetables used in curanto are potatoes, onions, carrots, butternut squash and apples.

The Colonia Suiza Bariloche curanto that is cooked during fair days is a fascinating spectacle – from preparing the stones with fire to covering the food to the official unveiling. We witnessed the entire event (which begins around noon) and applauded along with the crowd when the cooked food was revealed, ready to be served.

The one caveat is that dining on curanto is not cheap. The Colonia Suiza curanto price during our visit was 200 pesos per person, which was a little too steep for us. However, watching the event was what intrigued us most – and it was free to stand by and view the cooking.

In addition to local food, there is craft beer at Colonia Suiza, too. Valais Beer is made in small batches and served only at the fair. The beer is like nothing we’ve tasted before; the red beer was sort of half cider, half amber…but definitely delicious.

Just a short walk from the main fair street is Berlina Brewery, another Patagonian Cerveza Artesanal. The on-site taproom is open every day in the spring and summer for visitors to pop in and try their beers.

How To Get To Colonia Suiza, Argentina

Although it may seem like traveling back in time, Colonia Suiza is only 15 miles from San Carlos de Bariloche. Use this map to get driving directions.

We took the bus (#10), which took about an hour to get to Colonia Suiza from Bariloche. The buses, however, are infrequent. So, for the ride back, we took a 5km walk along a scenic route to catch a different bus back into town. The dirt road took us to an outstanding view from the bridge that splits Lago Perito Moreno into East and West.

Top Tip: Visit the Bariloche Tourist Information Office for current bus schedules, maps and advice. We received phenomenal help in planning our trips via city bus routes (which are not available on Google Maps).

When To Visit Colonia Suiza, Argentina?

Visitors can go to Colonia Suiza at any time; restaurant and café hours differ by location. However, most guests want their visit to coincide with the Feria Artesanal and the curanto feast, which only operates on Wednesdays and Sundays.

There are several camping sites for visitors who want to stay in Colonia Suiza, Argentina. Camping Goye, Camping Ser and Camping Huenei Ruca are three campgrounds in the village.

Looking for more Bariloche things to do? Check out our list of the Top 10 Things To Do in Bariloche.

We want to know: Have you been to Colonia Suiza in Bariloche? What was your experience? Give us your best tips and advice in the comments below!

Start planning your trip to Bariloche, Argentina! Search for the lowest airfares, the best accommodations and fun things to do…then start packing!  Want more travel planning tips? Head over to our Travel Planning page for more information and tips on traveling – and for country-specific information, take a look at our Travel Guides page!