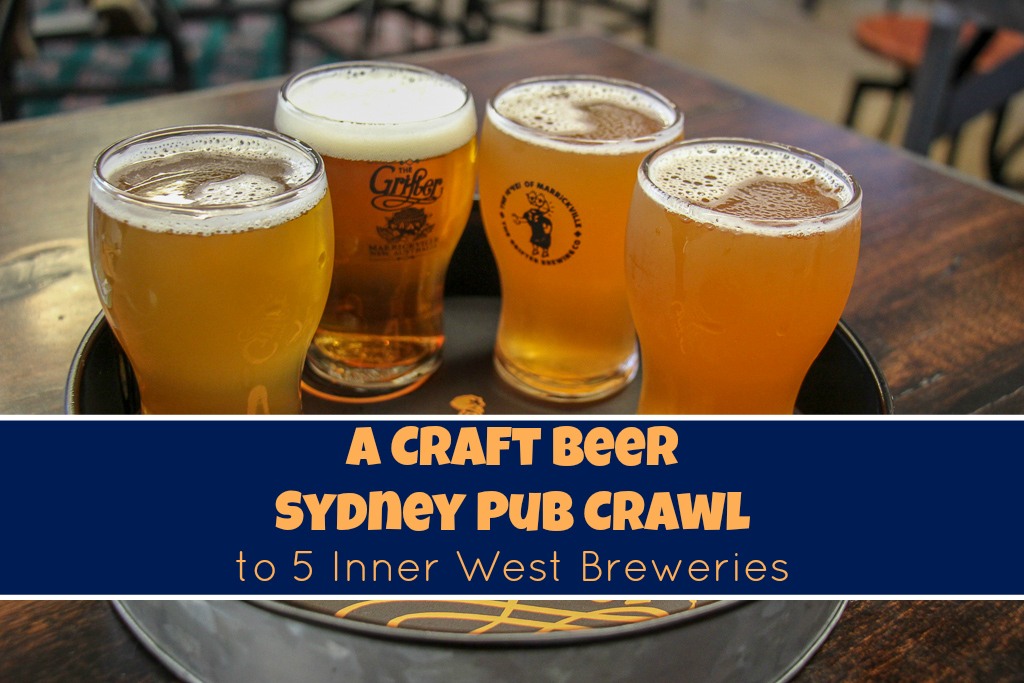 Well-known for iconic landmarks and a laid-back culture, something new is brewing in Sydney, Australia…quite literally. Multiple craft breweries have taken up residence in warehouses of the Inner West Sydney suburbs – which are just a short train or bus ride from the city center. The Inner West breweries are defining the craft beer Sydney movement. As craft beer junkies, we were eager to get a taste of the latest Aussie brews. The highest concentration of breweries in Sydney, Australia are in Marrickville, a mixed residential and industrial neighborhood. Enthusiastic about the close proximity of the breweries, we created a Sydney Pub Crawl walking tour that routed us to 5 Marrickville craft beer bars.

Like many cities around the world, Sydney, Australia is experiencing a craft beer boom. Although some classic Sydney hotel pubs seem reluctant to offer anything other than mass produced lagers, craft beer bars in Sydney are popping up for customers eager to support the craft beer revolution. These Sydney craft beer bars allow patrons the chance to sample beers from various local Aussie brewers. While we love the concept (and readily participate!), we think the best craft beer in Sydney comes straight from the source.

There are more than 10 Inner West breweries brewing fresh beer on site – all of which have accompanying tap rooms for customers to sample the product. Venturing just outside the city center to Marrickville brew pubs offers the absolute best opportunity for a craft beer tasting in Sydney. Touted as the Craft Beer Capital of Sydney, Marrickville breweries are a must-visit for beer lovers.

There is no better place for a Craft Brewery Sydney Pub Crawl than Marrickville. Several Sydney walking tours explore the Inner West pubs and offer beer tasting activities in Sydney. Joining a guided Inner West brewery tour can be a fun way to taste-test the brewery offerings and make some friends. However, we wanted the flexibility to linger in the pubs in Marrickville, Sydney where we liked the vibe – or to skip over a Sydney microbrewery if it wasn’t up to scratch. Therefore, we created a self-guided brewery tour in Sydney where we could walk from brewery to brewery at our own pace. Our craft beer Marrickville brewery tour includes 5 Inner West bars where delicious craft beer is brewed on site.

On our Inner West brewery tour, we sampled some of the best craft beer in Sydney. We are sharing our route – and our recommendations – for fellow beer lovers to follow in our footsteps to the best Sydney pubs in the Inner West crafting small-batch brews.

To help others plan an Marrickville Brewery Tour, we include each brewery’s website, address and hours of operation as of 2021. It’s important to note that many of these Sydney brewery tap rooms have limited hours, so plan accordingly. We have included a helpful Beer Tour Sydney map at the end of the post that indicates each brewery location. And, to help ensure patrons can find their way from one bar to the next, we have included a link to Google Maps for turn-by-turn directions. Cheers!

Our Sydney pub crawl tour starts at The Grifter, a Sydney brewery company that has been brewing since 2012 and opened at the current location in 2016. The spacious, open-concept brewery is bright with a shabby chic interior and ample seating. The bar and food truck sit in the center of the warehouse, with the brewery tanks against the back wall and a pool table tucked into the back corner. Grifter offers 12 beers on tap, including their core beers, as well as a few seasonal selections. We recommend kicking off a craft beer tasting in Sydney with a Grifter beer tasting paddle, which can be filled with four beers of your choice. Our favorite brews at Grifter are The Big Sur West Coast IPA and Grifter Pale.

Next up on our craft beer walking tour in Sydney is Sauce. The industrial interior of Sauce Brewing ensured us that making craft beer is the top priority of the Sydney beer company. Unadorned tables stand alongside the tall tanks and patrons line up at a no-frills bar for fresh beer from the tap. One of the things we liked best about Sauce is that it’s one of the Inner West pubs with a beer garden. The outdoor space at the back of the brewery is fitted with picnic tables and room for a food truck. We recommend trying a pint of the Extra Hop IPA.

New to Marrickville, the Stockade taproom just opened in June 2018, but they have been in the business (and winning awards) since 2015. In fact, we would have missed the Stockade Barrel Room if it wasn’t for the tip from our fellow, beer-loving friend – and we are stoked we were let in on the secret! The stylish brewery is well-decorated with an oak barrel bar, working tanks and bourbon barrels that are maturing oak-aged beers. In addition to the core range on tap, they also offer a selection of limited-edition beers, as well as creative on-tap, hop-infused cocktails and tap wine, too. Our recommended beers at Stockade are the 8 Bit IPA and Hop Slicer XPA.

The fourth stop on our craft beer brewery tour is Batch Brewery Sydney, one of the best bars in Marrickville. The dimly-lit space and overstuffed couches create an inviting atmosphere where patrons can savor a range of tasty beers. Beyond the laidback bar, fermenting tanks are hard at work doing what they do best; look behind the bar for the list of current fermenting beers. The tap list at Batch includes a rotation of 10 quirky-named beers. We are huge fans of the Batch West Coast IPA, but with their selection of inventive and unusual beers, we recommend getting The Crate – a tasting of six select beers.

Continue beer tasting in Sydney to one last bar: Willie the Boatman Brewery. The brewery was started by two friends in 2012 – and the taproom (located just outside Marrickville, actually) opened to the public in 2015. The nautical-themed taproom and brewery has more of a pub feel to it than the other breweries, as the space is sectioned into rooms. It’s a casual and fun spot for one last beer on an afternoon Sydney pub crawl. Featuring 7 rotating taps, we recommend the Todd’s Trailer Pale Ale and the Crazy Ivan IPA.

Use this link to Google Maps with turn-by-turn directions to plan your pub crawl Sydney route. With ample public transportation to the pubs in Inner West Sydney, there is no need to drive! Find a bus or train to Marrickville so you can enjoy your beer tasting tour in Sydney without the worry of driving.

We designed our craft beer Sydney pub crawl as an on-foot adventure through Marrickville to multiple breweries. However, there are more craft beer pubs in Sydney and the Inner West for beer lovers to explore.

Touted by many as the best Sydney microbrewery, BlackFont Brewhouse unfortunately has extremely limited hours. Only open for a few hours on Friday afternoons, adding this brewery to a Sydney pub crawl takes some planning effort. That being said, it is totally worth it! The small taproom is sure to be packed with locals and in-the-know tourists. Facebook. Top Tip: If you want to add Blackfont to your Sydney Pub Crawl, we recommend starting at Blackfont and reversing our above brewery route.

The Newton brewery began creating beers in 2012 and quickly expanded. They offer a core range of beers and a selection of seasonals. Website.

With a focus on mixed fermentation, the brewers at Wildflower create a unique lineup of beers. The Marrickville tasting room has limited hours – and is only open on Fridays and Saturdays from 2pm-6pm. Website. Top Tip: Wildflower Brewing can also be easily added into a Friday or Saturday Marrickville brewery crawl; it’s located between Sauce and Grifter.

The founders of Rocks Brewery Sydney began brewing as early as 2008. The current brewery in the Inner West suburb of Alexandria – which is open 7 days a week from morning until late – was opened in 2014. Website.

Opened in 2018 as a multitap for the Rocks Brewery Company Alexandria, Lord Raglan evokes an old-school hotel pub atmosphere. The Redfern craft beer bar features a fabulous tap list of 16 craft beers from Rocks and other microbrewers. Website.

Opened as a craft beer bottle shop, the Marrickville Bucket Boys store now sells their own crafted beers, too. The taproom offers a chance to try beers brewed in the hood – and they sometimes host tap takeovers from microbrewers around the world. The downstairs bar is where you can fill a growler for take away. Website.

4 Pines Brew Pub is located in the Northern Beaches Sydney suburb of Manly. It is the original – and still operating – site for the popular 4 Pines brewery. Visit the upstairs brewery, take a brewery tour or try one of the beers on the revolving taps downstairs at Keller Door. Website.

James Squire is craft beer on a large scale. One of the first craft beers to emerge in the 1980s, they have recently opened a new microbrewery, Squire’s Landing. The location at Circular Quay has incredible views of the Sydney Harbor Bridge and the Opera House, but what really thrills us is that they are creating small batch brews on site. Website.

Beer isn’t the only craft in the Inner West…Archie Rose is creating craft whiskey and gin, too! The boutique Archie Rose distillery is located in Alexandria and features a full bar.

Want to meet and mingle with fellow beer drinkers on one of the Sydney pub tours? Join a highly-rated craft beer tour in Sydney for a night of beer drinking fun! Get the details!

Start planning your trip to Sydney! Search for the lowest airfares, the best accommodations and fun things to do…then start packing!  Want more travel planning tips? Head over to our Travel Planning page for more information and tips on traveling – and for country-specific information, take a look at our Travel Guides page!

We want to know: Have you done a Sydney Pub Crawl of Inner West Breweries? What is your favorite craft beer bar in Sydney? Give us your best tips and advice for drinking craft beer in Sydney in the comments!