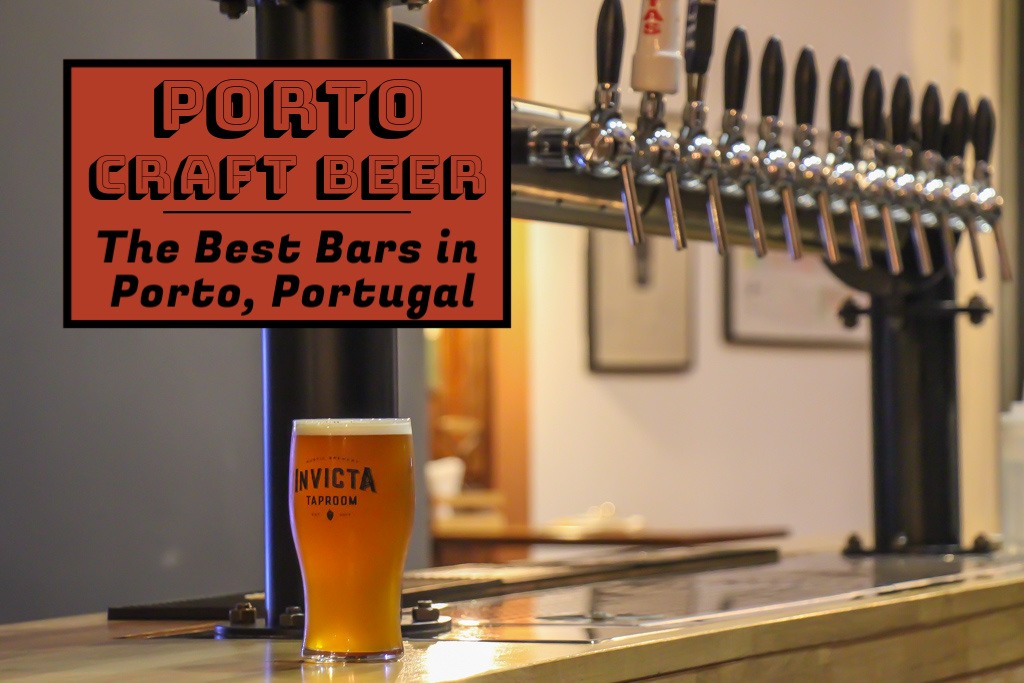 Still a relatively new concept in the city, Craft Beer in Porto, Portugal is a growing trend that is catching on with locals and tourists alike. With a handful of dedicated craft beer bars in Porto, beer enthusiasts can sample a range of fully flavored, locally produced brews.

With our hop-loving palates, we were all too happy to indulge in the Porto craft beer scene. To help other beer aficionados, we are highlighting the best Porto beer bars devoted to craft brew.

For many years, drinking Portugal local beer meant swigging a Sagres (produced near Lisbon) or a Super Bock beer (made in Porto). While these well-recognized Portuguese beers are ingrained in the Porto drinking culture, they are far from the best beer made in the country. Yet, the big brands have a firm hold on the Portuguese drinking infrastructure, which has made it challenging for microbrewers to enter the market.

As the craft beer revolution gained momentum, Super Bock was quick to launch their own version of craft beer (as well as beer mixers) under the brand names Super Bock Seleccao 1927 and Coruja. While we find these beers to be surprisingly pleasant, we feel they lack the passion and creativity that goes into small-batch craft brews.

Surely, the tides are changing in the Porto beer market. Drinking local beer in Portugal no longer refers only to Super Bock. Portuguese craft brewers are carving their way into the Porto beer culture by producing inventive and delicious beers that far supersede the big beer companies’ offerings.

To bring craft beer to the people, bars committed to serving only craft beer are popping up around Porto. On a mission to taste the best Portuguese craft beer, we sought out the top craft beer bars in Porto – and here are our reviews and top tips.

Our list of 8 Porto Craft Beer Bars includes our favorite places to drink craft beer in the city. For each location, we include a link to Google Maps, so that fellow beer-lovers can easily route their way to the establishment. At the end of the post, we provide a link to a Porto Beer Map that marks all of our recommended craft beer locations.

MAP. Catraio Craft Beer Porto is labeled as a ‘beer shop’ but it really is so much more! With a friendly, easy-going atmosphere, it’s one of the best places to enjoy a Portuguese craft beer.

The Catraio Craft Beer Bar (and shop) was the first of its kind in Porto – and they are credited as being the pioneers in Porto craft beer. The bar remains one of the hippest places to drink craft brew in the city.

At Catraio, they offer 10 beers on tap and more than 100 local and international craft brews in the bottle (for on-site consumption or take-away). Their passion for craft beer is evident in their knowledgeable staff and exciting rotating tap list.

MAP. Letra Cerveja hails from northern Portugal in the city of Vila Verde. Producing quality beers since 2013, Letra is one of the leaders in the Portugal craft beer movement. Their base range of beers are each named after a letter (Letra in Portuguese): A is Blonde Ale, B is Bohemian Pilsner, C is a tasty Oatmeal Stout – and so on.

Their Letraria Craft Beer Garden Porto taproom is one of the coolest places to drink craft beer in the city. Visitors are welcomed into a small stylish bar – but the real gem is the sprawling beer garden that is accessed via the basement bar. Letraria offers 20 beer on tap – and an additional 100 beers in bottles. They also have a full menu of bar snacks and meals.

MAP. Armazem da Cerveja – or Beer Warehouse – is a fun place where friends and beer lovers come to hang out and drink good beer. In the shop at the front of the bar, bottled craft beer from around the world fills the shelves. Behind the bar, there are 8 beers on tap, from Portugal and beyond.

The inviting pub has a jovial vibe and friendly bartenders. They don’t offer any food, but patrons are allowed to bring in their own food to consume on the premises. There are fun events on select nights as well, like trivia and live music.

MAP. Transformed from a cafe restaurant into a craft beer bar in 2017, Cervejaria do Carmo features an impressive selection of Portuguese beers and international craft beer brands. They offer 15 beers on draft – as well as a massive selection of chilled bottled beer – and a menu of traditional bar snacks.

One of the best things about Craft Beer House Cervejaria do Carmo is the prime location facing the Igreja do Carmo – a stunningly beautiful church covered in the classic blue Portuguese azulejo tiles.

Pro Tip: The Carmo Church is one of the stops on our Self-Guided Porto Walking Tour!

MAP. Boasting a bright and modern setting, Fabrica Nortada, serves up a wide variety of Porto craft beers. Their new hop series is on the top of our list to check out on our next trip to Porto!

The story behind the beer began between two friends in 2015, with official launch of the brand in 2017. The brew pub opened in 2018 and Fabrica Nortada has been brewing up storm ever since. They also offer a full food menu, from bites to sharing plates to classic main dishes.

MAP. Established in 2015, Colossus Craft Brewery brews their line of beers right in the heart of Porto. An informal taproom occupies the front of the brewery, where visitors can get a taste of what is brewing in the back. The industrial space is also used for community events (such as poetry nights and pop up kitchen experiences).

Their signature beer – Wonderlust – is a Portuguese version of a traditional IPA. However, we were most intrigued by their range of creative brews – like Imaginary Pumpkin and Devil’s Spicy Tongue.

MAP. Established in 2017, the Levare Brewery is hidden down a small lane (look for mannequins sitting at the tables near the entrance) right next to the striking Ildefonso Church. In addition to brewing on-site, the complex includes a lush beer garden and a sleek indoor space for their restaurant and bar (which is great for larger groups).

Featuring their own core beers – along with a couple of seasonal brews – there isn’t a huge selection of beer. That said, because they are brewing on the premises, it is certain to be fresh. Additionally, they offer an excellent happy hour!

MAP. At A Fabrica da Picara, they brew on-site with the sole intention of serving what they brew in a glass – there is no bottling or canning and their beers are unfiltered and unpasteurized. The brewing takes place in the basement and the tanks are featured in the industrial atmosphere. The space also offers an elevated outdoor terrace and a street-side patio.

They brew a line up of both standard and creative beers – with something always fermenting in the tanks. Additionally, they have a menu of traditional food and bar snacks to accompany their beers.

The Porto Beer Fest is an annual event celebrating local and international craft beer. Featuring tastings, food pairings, workshops and shows, the Beer Fest in Porto attracts visitors from around the world. The event takes place in June. Find out more on the office Facebook Page.

Need more tips for things to do in Porto? Find all of our insider tips and advice in our Porto Itinerary!

MAP: Where To Find Craft Beer in Porto

Use this link to Google Maps to route your way to all the Best Craft Beer in Porto.

Local Beer pairs perfectly with Local Food! Get our recommendations for the top bar snacks, late night eats and the best food to eat in our blog post, Porto Food: What and Where To Eat in Porto!

However, visitors who want to let a guide lead the way can join a wildly popular Porto Craft Beer and Food Tour. On the 3-hour tour participants learn about the history of craft beer in Portugal, get a behind-the-scenes look at the brewing process, sample craft beer from four locations and enjoy traditional Portuguese bar snacks, too. Reserve your spot!

Going to Lisbon, too? Check out our tips (including a Day Trip To Sintra) in our 3-Day Lisbon Itinerary!

We Want To Know: What is your favorite Porto Craft Beer Bar? Do you have specific craft beer recommendations? Share your tips and advice in the comments below!

Start planning your trip to Portugal! Search for the lowest airfares, the best accommodations and fun things to do…then start packing!  Want more travel planning tips? Head over to our Travel Planning page for more information and tips on traveling – and for country-specific information, take a look at our Travel Guides page!