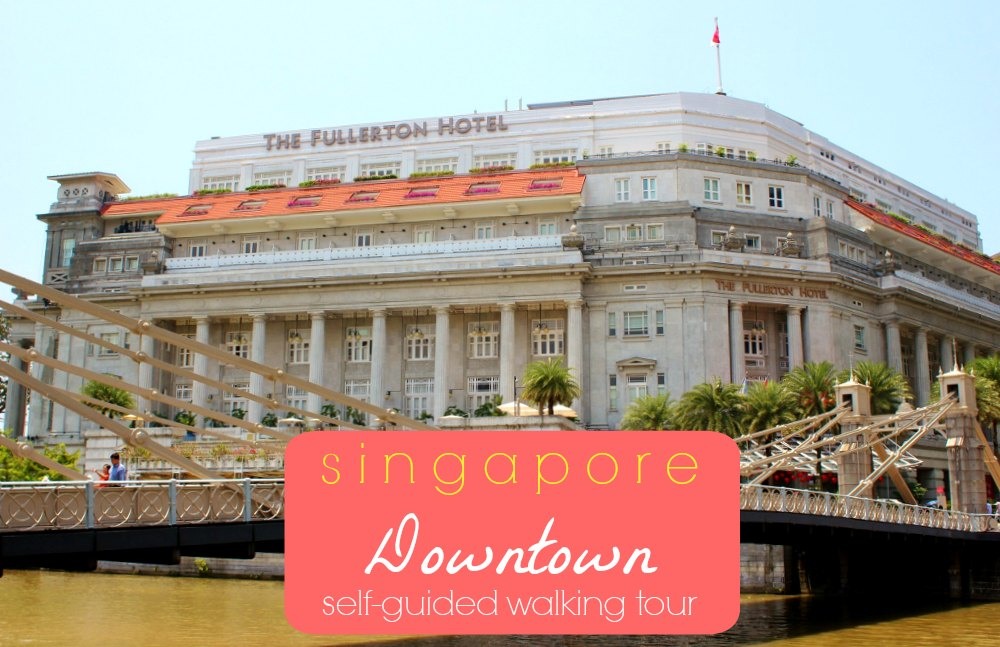 Singapore is a fascinating city. From colony to city/state, the island nation has a historical past and future vision. We explored the city by setting out on foot each day to discover the top sights and hidden gems in the city. Follow in our footsteps and get acquainted with the city on a Singapore Downtown Walking tour.

Tip: Want to discover other districts in Singapore? Check out our Marina Bay and Chinatown walking tours, too!

On our Singapore trip, we wanted to see as much of the city as possible. We could have joined one of the Singapore walking tours, but instead decided to grab a Singapore tourist map and plot our own route to Singapore tourist spots. We focused on places to visit in Singapore for free. A good pair of walking shoes and a Singapore city map are all that is needed for this free Singapore tour! To help you route your way through the city, we have included a Singapore sights map and a link to our route on Google Maps at the end of the post.

Top Tip: Want to learn more about Singapore? Let a guide lead you through the history and sights of downtown Singapore on a highly-rated group tour.

Like many tourists, we started our Singapore Downtown Walking tour at the iconic Raffles Hotel. originally built by the sea in 1887, the hotel is named for the city’s founder, Sir Stamford Raffles. The colonial-style hotel has been moved and undergone numerous additions and remodels (currently being renovated again in 2018). The massive complex is a historic Singapore landmark. The guest list ranges from the famous to soldiers to prisoners of war during World War II. Possibly more famous than the hotel is the hotel bar, The Long Bar, which is credited for creating the original Singapore Sling (however, we passed on ordering one, as the city’s namesake cocktail at Long Bar costs more than 30 SGD – about $22.50 USD).

The 220-foot-tall Civilian War Monument stands to remember the thousands of civilians that were killed during Japanese Occupation during the Pacific War (1942-1945).

Today, the open field, Padang, in the city center is used for many events, including the Padang Cricket Club, which was established in 1852.

Built between 1856 and 1861, the Anglican St. Andrew’s Cathedral is the largest in the country. It is dedicated to St. Andrew, the patron saint of Scotland, because of the generous donations for the church building by the Scottish community.

Singapore is known for its strict laws and stiff penalties (trafficking illegal drugs is punishable by death). The Supreme Court – comprised of the Court of Appeal and the High Court – is where the punishments are doled out. The current Supreme Court building opened in 2005. The building, which looks like a spaceship landed on it, features glass to emulate ‘transparency in law.’

The current Parliament House is relatively new (it just opened in 1999), but it was designed to look historical and stately. The new building, which was needed due to lack of space in the Old Parliament House, incorporates a historic building that dates to 1864.

Built in 1826, the Old Parliament House – now The Arts House – is a national monument of Singapore. It is the oldest government building in Singapore and today serves as an arts and heritage center.

The National Gallery Singapore – and its more than 8,000 artworks – is housed in the former Supreme Court Building and City Hall. It’s the largest museum in Singapore.

Dating to 1862, the Victoria Theatre has been used for events, meetings, exhibitions, performances and even as a hospital. The building is a Singapore National Monument.

Marking the place Sir Stamford Raffles landed in Singapore in January 1819, his statue stands along the riverside with towering skyscrapers behind him.

The Asian Civilizations Museum features history and artifacts from all Asian cultures, which celebrates the diversity of Singapore’s multi-ethnic population.

The Cavenagh Bridge is the oldest remaining – and only – suspension bridge in the city. Before crossing the historic bridge, take note of the original signage stating cattle are forbidden to cross the bridge.

The architecturally beautiful Fullerton Hotel was built in 1928 and originally served as the city’s post office. It only became a 5-star hotel in 2001.

The old shop houses of Boat Quay represent the traditional past in striking contrast to the sleek skyscrapers that sit beyond it. The shops have all been converted into restaurants and bars and, although touristic, Boat Quay is a fun place to spend an evening. Tip: Further up-river are two more historic-turned-entertainment quays: Clarke Quay and Robertson Quay.

The Yueh Hai Ching Temple is the oldest Teochew temple in Singapore. It was built in 1826 to give thanks to the gods for safety at sea. The intricate details and bold colors stand out, even though the temple sits in the shadows of the skyscrapers.

Sitting low-key among the towering buildings, the historic Lau Pa Sat market (also called Telok Ayer Market) provides a glimpse into the old-world charm of Singapore. The building, with its cast-iron arches and clock tower, house some of the best hawker stalls in the city. Our top recommendations are Indian Curry House and Thunder Tea Rice (for phenomenal – and healthy! – cuisine). But, if visiting in the evening, sit outside and enjoy sticks of flame-cooked satay.

A Singapore Itinerary: The Ultimate Guide of Things To Do

Use the link for the route of our Downtown Singapore Walking Tour on Google Maps.

Before You Go: Our top tips for your trip

Start planning your trip to Singapore! Search for the lowest airfares, the best accommodations and fun things to do…then start packing!  Want more travel planning tips? Head over to our Travel Planning page for more information and tips on traveling – and for country-specific information, take a look at our Travel Guides page!

Subscribe to JetSetting Fools and get new blog posts and our quarterly newsletter direct to your inbox:

We want to know: What do you think of our self-guided Singapore Downtown walking tour? What Singapore sightseeing places would you add to our list? Tell us in the comments! 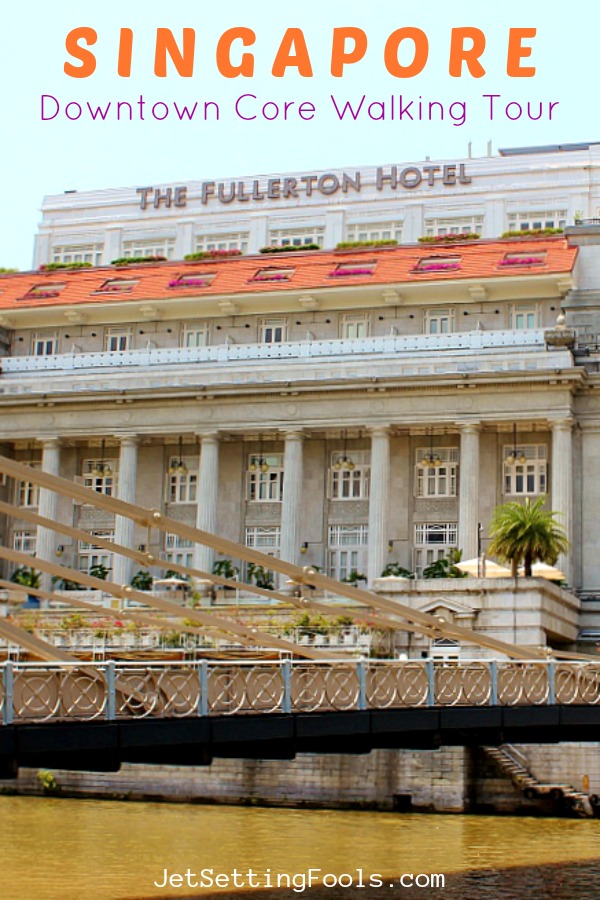 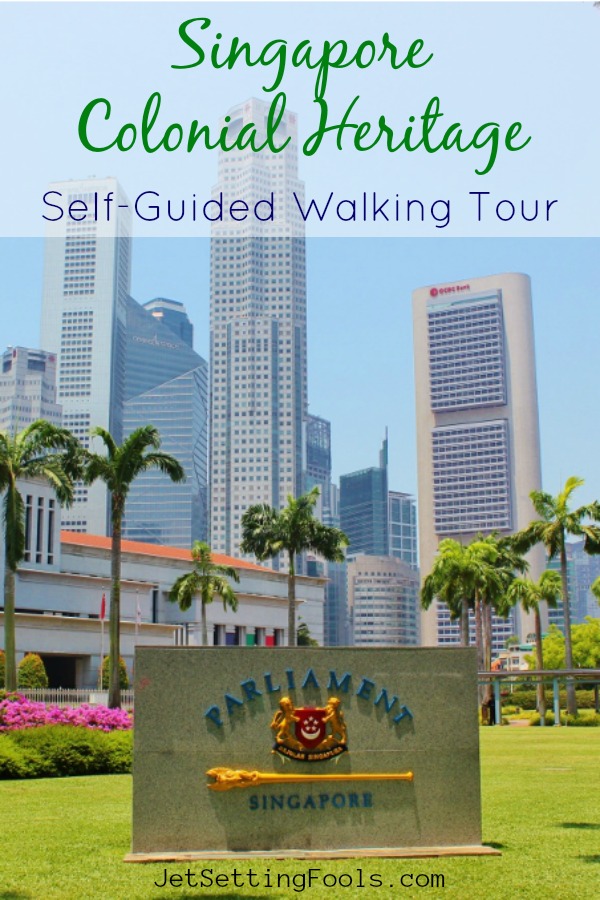 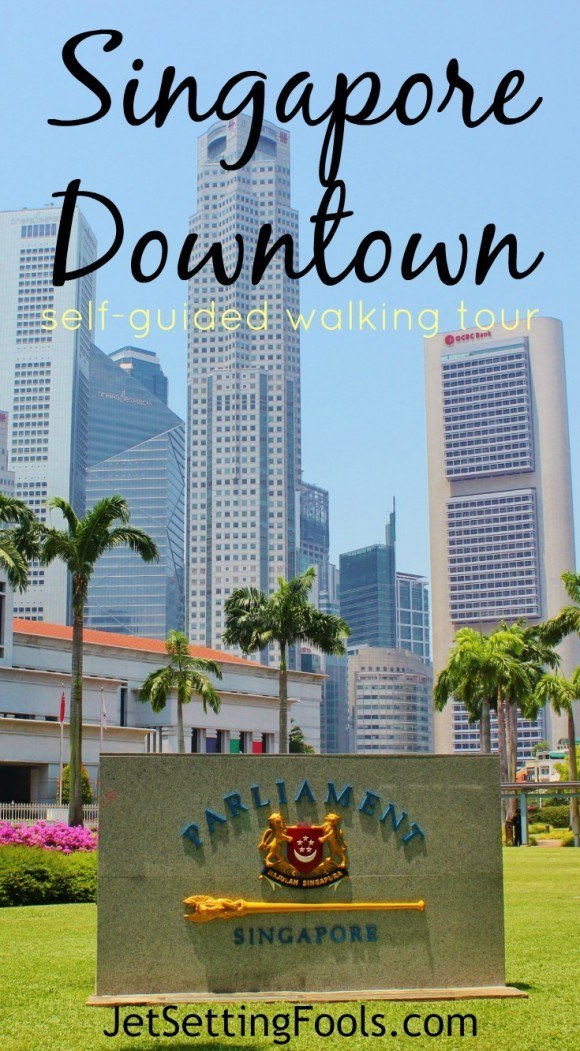