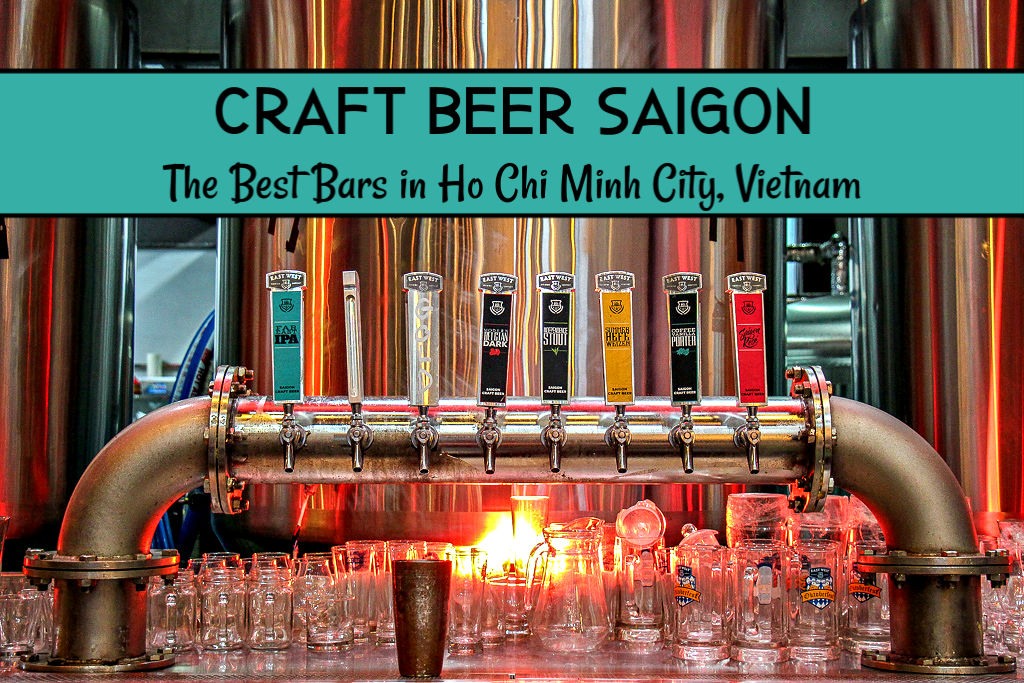 The Vietnamese beer culture – long defined by cheap, light lagers – is finally evolving to include innovative and flavorful brews. The trend began with the introduction of locally produced craft beer in Ho Chi Minh City and the movement is taking Vietnam by storm. There are now several bars in Ho Chi Minh City dedicated to pouring microbrews – as well as craft beer Saigon breweries opening their own taprooms.

On our recent trip to HCMC, we pushed aside the well-known Vietnamese beer brands in favor of Ho Chi Minh City craft beer. We limited our ‘research’ to HCMC District 1 and discovered some of the best bars in Saigon serving craft beer.

In search of the best beer in Vietnam, we visited 6 Saigon brewery taprooms in Ho Chi Minh City Dist 1. For each location, we provide a link to Google Maps, so that fellow beer lovers can follow in our footsteps to sudsy goodness! At the end of the post, we include a HCMC map of all the locations – plus a few more tips on drinking Saigon craft beer.

Save, Pin or Bookmark our Ho Chi Minh City Beer blog post so that you can easily access it during your Saigon trip!

MAP. Established in 2016, Heart of Darkness Brewery produces a full line up of flagship brews – like a Cucumber Pilsner and Cacao Nib Porter – and a creative seasonal selection as well. Their signature beer, Kurtz’s Insane IPA, serves a big and hoppy punch (just like we like our beers!). The brewery taproom features a large shaded patio and 20 taps inside at the air-conditioned the bar.

MAP. Considered a pioneer in Vietnam craft beer, Pasteur Brewing utilizes American craft beer methodology to create a range of beers made with fresh Vietnamese ingredients. This Saigon beer company opened in 2014 with a location on their namesake street, Pasteur – and since, they have expanded to multiple taproom locations (including one in Hanoi and one in Hoi An). Our favorite location is the original taproom on Pasteur Street, which has been expanded to include a rooftop terrace, which is the perfect place to enjoy their hop-heavy Jasmine IPA.

MAP. With the slogan, “Connecting Cultures through Craft Beer,” East West Brewing employs a blend of brewing techniques from Europe, America and Asia to produce award-winning beers. Their modern warehouse-style brewery features an on-site taproom and restaurant with a sophisticated bar menu. Focused on creating a community, East West hosts cool events and a weekday happy hour, as well as brewery tours. We enjoyed beers from their core selection – like the Pale Ale and Far East IPA (which they also sell by bottle for take-away) – but liked to taste their seasonal specialties, too (we recommend the Mosaic Ale!).

MAP. Taking inspiration from American style craft beers and infusing distinct Asian flavors, LAC Brewing features a fun selection of beers – like Mango IPA and Cashew Cream Ale. The name – Lac – translates to Lost in Vietnamese; however, their sleek new taproom is pretty easy to find – as it is conveniently located across the street from East West Brewing. On tap, they feature their staple beers – as well as a selection from other brewers (they had American Deschutes on tap when we were there!).

MAP. Hip and jovial, Winking Seal Beer Company features a diverse collection of playfully named beers – like Love More Lemongrass Blonde Ale and Sailing Club Dragon Fruit Pale Ale. In their taproom, they pour beers (their own, as well as guest brews) from 16 taps – and their core range can be purchased in cans as well. Early evening drinkers and late-night revelers can benefit from their stellar happy hour, where they offer 50% off house pints (a Saigon craft beer deal that can’t be beat!).

MAP. With 6 locations in HCMC and a huge selection of Vietnam craft beers, BiaCraft appeals to locals and tourists alike. The BiaCraft line up of artisan beers is poured alongside competitor’s beers, making this beer house a one-stop-shop for craft beer aficionados. With so many choices – including 7 Bridges from Da Nang, Fuzzy Logic Beer and Te Te Craft Beer – we recommend ordering a Beer Flight!

While the taprooms were our favorite bars in Ho Chi Minh City to drink Saigon craft beer, there are other places that serve locally-produced craft brew.

MAP. Well-known as the best place to eat in pizza in HCMC – and featured in our Saigon Food Guide list of Ho Chi Minh Restaurants, 4P’s offers a range of craft beer on draft (which pairs nicely with their in-house made cheese!).

MAP. Featuring a variety of Vietnamese craft beer, Urban Basement is a fine place to go for a good pint, pub grub and live sports.

Now that you know where to find the best bars in HCMC for local craft beer, we have a few more tips for your drinking adventure!

How to say Cheers in Vietnamese is pretty simple, it’s just dzô – which is pronounced Yo. However, rather than just saying ‘Cheers,’ it is common for groups to clink glasses after shouting, “Một hai ba dzô!” – which translates to “1, 2, 3 Cheers!”

How Much is a Beer in Vietnam?

However, the cost of Vietnam craft beer is much more. Craft beer drinkers can expect to pay between 100k – 150k ($4 – $7 USD) for a pint of Saigon craft beer in taprooms and bars in Ho Chi Minh City.

Visitors can easily use our Saigon Craft Beer Guide and HCMC Map to create their own Craft Beer Tour. However, travelers who want to enjoy craft beer, snacks and stories with a local guide should consider joining an organized craft beer tour. Read the reviews and book it!

Start planning your trip to Vietnam! Search for the lowest airfares, the best accommodations and fun things to do…then start packing!  Want more travel planning tips? Head over to our Travel Planning page for more information and tips on traveling – and for country-specific information, take a look at our Travel Guides page!

We Want To Know: What is your favorite Saigon Craft Beer? Are there any craft beer bars in Ho Chi Minh City Dist 1 that you would add to our list? Give us your best tips and advice in the comments!