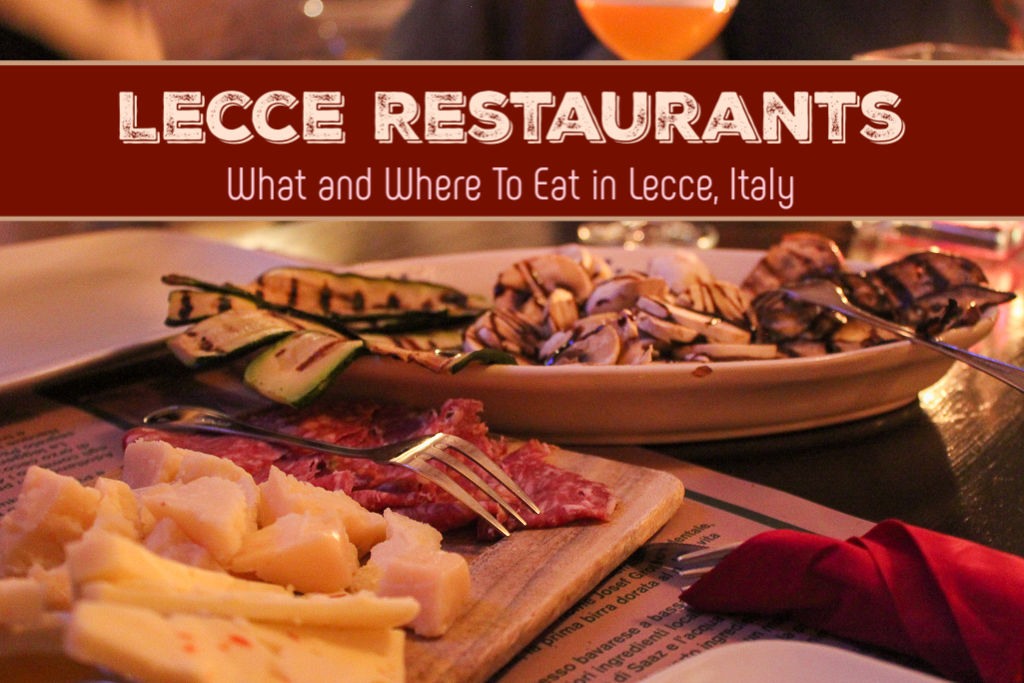 There is so much to love about Lecce, Italy – the unearthed Roman ruins, the extravagant Baroque architecture and, of course, the incredibly delectable local cuisine. We spent a month in Lecce sampling everything from traditional fare to aperitivo to scrumptious sandwiches. We feasted at top Lecce restaurants – and are sharing our tips for what and where to eat in Lecce, Italy.

Traditional cuisine in the Puglia region and Leece is referred to as “La Cucina Povera,” translating to “Poor Kitchen.” The term originates from the simple farm meals that were both inexpensive and filling. Today, the home-style feast is a culinary art. Chefs are able to transform basic ingredients into mouth-watering concoctions. The hearty meals are served in multiple courses at a osteria – the name for traditional restaurants in Lecce, Italy.

However, eating in Lecce, Italy isn’t limited to the traditional fare of the region. Typical Italian dishes – like pizza and pasta – are featured on many Lecce restaurant menus. And, of course, local fast food options are available as well.

Our list of restaurants in Lecce, Italy is based on our personal experiences (which we consumed at our own cost!). For each of our featured nine things to eat in Lecce, we include what we ate and a link to more information. At the end of the post, we provide a useful map of our recommended places to eat in Lecce.

Highly recommended by our Airbnb hosts as one of the best restaurants in Lecce, La Vecchia Osteria offers traditional local cuisine. Established in 1999, the farm-fresh focused restaurant is frequented by both locals and tourists.

We arrived early – at 8:00pm – but witnessed the restaurant fill up, with some guests just arriving at 10:00pm when we were finished. The quaint, two-room restaurant is cozy – accented by the wood fire burning in the stone fireplace.

Knowing that portions are huge, we opted to share one four-course meal (and we still had leftovers!).

For the starter, we had the Antipasto di Polpette, Pittole e Crocchette (a platter of fried goodness that included meatballs, potato croquettes and fried dough).

For the meat course, we couldn’t resist the tempting Arrosto Misto. The mixed grilled meat platter included spicy sausage, a skewer of mixed pork and peppers, and two fillets: one pork, one horse (a regional specialty).

Even though we were already full, we indulged in an ice cream dessert. Our meal was accompanied with the inexpensive house red wine. Website.

This easy to miss spot located near Porta Napoli, was also suggested by our hosts for “La Cucina Povera.”  With a menu very similar to La Vecchia, the restaurant seemed to be more popular with locals and less expensive.

On our first attempt to eat at Angiulino, we showed up at 7:00pm on a Saturday night without a reservation. Even at the early hour, there were no seats available until much later. Instead, we made 8:00pm reservations for the following Monday and we were the second table seated, along with other travelers who like to eat ‘early.’

Again, we ordered all of our courses to be shared – and still only managed to eat 3 courses! For the appetizer, we tried the inexpensive meatballs and potato croquettes, followed by a plate of Italian baked fusilli with tomato sauce. Sticking with what we like, we ordered the assorted grilled platter as our main meat dish. The char-grilled meat was cooked to perfection – and included a delicious chicken breast.

We skipped on dessert, instead indulging in an extra glass of the house wine while we watched the restaurant fill up with locals, both young and old. Info and Reviews.

We love pizza (who doesn’t?!). In fact, we believe it is acceptable to eat for any meal, any time of the day. So, of course, when we are in Italy, we let ourselves indulge. As one might guess, there are numerous Lecce pizzerias (all the better for us!) – and we tried several. However, the one we liked the best was La Negra Tomasa. Featuring a relaxed atmosphere and a long list of affordable pizzas and other Italian dishes, La Negra Tomasa is perfect for a chill night out.

We tried several pizzas at La Negra Tomasa, but we each had a favorite. Kris loved the Diavola, a spicy pizza with Italian salami. I favored the unique local pizza topped with a combination of mozzarella, prosciutto crudo, brie, corn and fresh tomatoes. Info and Reviews.

Set in a historic stone building in the city center, La Sapore is a stylish restaurant in Lecce. We stumbled onto the shabby chic space when we were looking for a place to have some wine and appetizers with friends.

We merely mentioned we would like the aperitivo and continuous stream of small plates were brought to our table. Although unexpected, the real treat was the uniqueness and variety of the dishes. With only the intention of snacking, we ingested a full meal.

Top Tip: We indulged in several aperitivo meals while in Lecce, Italy. The small meals are a typical accompaniment to an early evening drink.

Find out our top recommendations for Bars in Lecce.

Puccia is a typical Lecce sandwich (Tipici Panini Lecce)…but unlike any other sandwich we have ever tried. And the best place to have Puccia is at La Prelibatezza. The restaurant was established in 1941 and is still a family-run venture (with the 3rd generation currently at the helm).

The sandwich is made using a pizza dough bread, which is baked locally and then it is topped with an assortment of fresh ingredients.

We ordered our Puccia sandwiches with the works. The still-warm loaf of bread was sliced and piled high with Mortadella, cheese, roasted eggplant, pearl onions, sun-dried tomatoes, cooked spinach, pickled corn and carrots, olives and spicy peppers. Then smeared with a creamy ricotta sauce over the toppings, brushed with olive oil and pressed in a grill. Wow! Trust us on this one – and go try it for yourself! Info and Reviews.

Connected to a B&B and almost always open, we stopped by Doppiozero more than once. The hip place features community tables and the friendly staff exudes a welcoming vibe. We thought it was a great spot for a quick lunch or an early evening drink.

Although they offer a full menu (in English!), we never ventured beyond the fresh salads and aperitivo. Facebook Page.

Set back from the main street and always packed, La Cantina delle Streghe is modern and hip restaurant in Lecce. The contemporary glass-fronted restaurant stands out in a town of classic stone architecture – and offers an upscale experience…without being too pretentious.

We breezed into the restaurant for a late-night glass of wine. It was our last stop of the evening and although we were full (from too much aperitivi!), we couldn’t resist the decadent desserts.

We were only going to share one dessert – the chocolate fondue with fresh fruit – but under the advisement of our lovely waitress, we succumbed to ordering two. A bright move, the second dessert was a plate of puffy beignets covered in white chocolate shavings and swimming in thick, warm chocolate sauce. We devoured them both! Website.

It would be remiss if we didn’t mention the delicious local specialty, Pasticciotto. Similar to a cupcake, the pastry was invented in Lecce in 1745. The small, sweet treat is made with various fillings – from traditional lemon ricotta to Nutella to unique combinations, like pistachio chocolate crunch.

The chef of our favorite pastry shop sadly moved from Lecce to the coast, where he still churns out more than 300 flavors of Pasticciotto at the Pasticciotteria Bakery in Porto Cesareo. However, the delightful morsels are available at bakeries throughout the city. We never tried them at Caffe Alvino, but they get rave reviews!

With a lack of major fast food chains (thank goodness) and a surviving Greek/Turkish influence, kebab and fry shops are the popular option for cheap food on the go. For kebabs, we always picked the place with the longest line of locals.

Our favorite fries are from Natural Chips (and, we admit, we ate these tasty treats more often than we should have!). The fries are made fresh using real potatoes (gasp!) and a choice of 20 different toppings (curry ketchup is my new fav!). Info and Reviews.

Use this link to Google Maps to find all the Best Food in Lecce, Italy!

Tips for Eating in Lecce, Italy

Now that you know where to eat in Lecce, we have a few more tips for your culinary experience!

It took us some time to understand the typical hours of eating in Lecce, Italy – something that we never really caught on to fully. In some cases, it worked to our benefit (we were often the first – and sometimes only – patrons at Lecce restaurants during our preferred early dining hour).

However, as we adapted to the later eating and imbibing hours, we began to notice how many cafes and restaurants opened late in the night. To experience the best Lecce nightlife and dining options, we recommend eating and drinking late in the evening.

Being in Lecce for one month, we had plenty of time to explore the unique tastes of the city. Visitors with less time might want to consider joining a Lecce Food Tour to experience the absolute best gastronomy!

Learn about the fascinating history of the city with a passionate local guide – then sample the city’s iconic treat! Learn more here!

Sample the city’s best street food on a guided tour! Let a local guide lead the way to the best spots for savory food and sweet treats! Find out more!

Make Your Own Lecce Meal (with local help!)

Under the guidance of two sommeliers, create an amazing traditional Lecce 4-course meal. Complete the experience by indulging in your feast with perfectly paired wine. Get the details!

For more tips on Lecce, Italy, read our guide to the Top Things To Do in Lecce!

We want to know: What did you think of Lecce food? Are there any establishments you would add to our list of Lecce restaurants? Give us your best tips and advice in the comments below!

8 thoughts on “Lecce Restaurants: What and Where To Eat in Lecce, Italy”