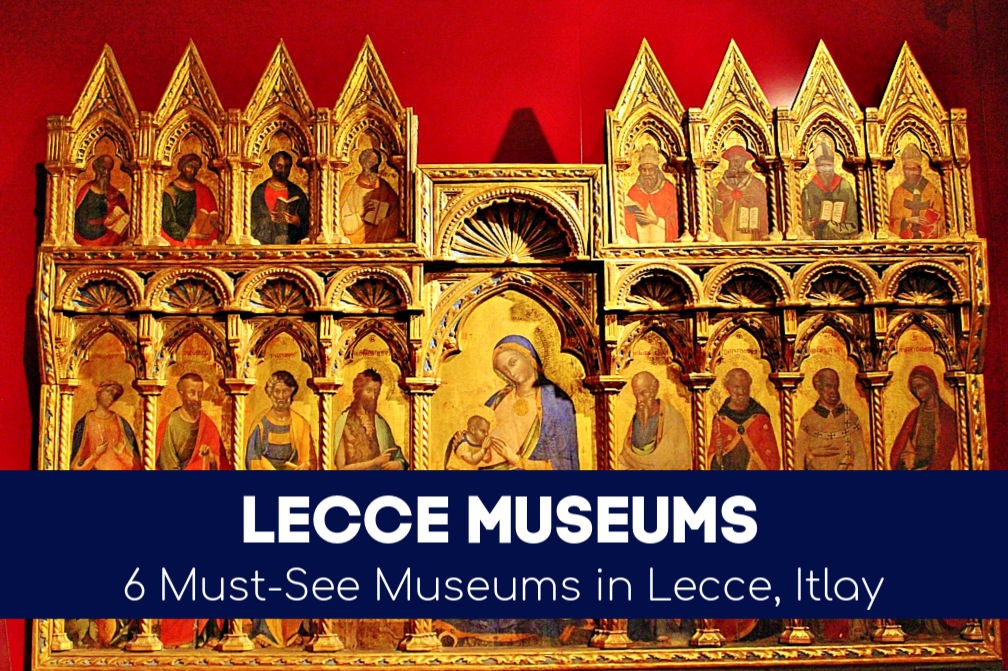 We rarely visit museums – but in Lecce, Italy we made an exception. The city features numerous museums that exhibit details of the ancient past and focus on the city’s incredible art history. During our stay in the city (that saw a string of rainy days), we visited 6 Lecce museums.

The museums in Lecce are fairly inexpensive to enter – and one is free! Each museum can be visited in about an hour or less.

Our list of museums in Lecce, Italy are ranked in order – with #1 being our absolute favorite. For each museum, we include links to fellow travelers reviews, pertinent information for visiting the Lecce museums and online tickets (if available). At the end of the post, we include a link to a helpful Lecce Map of Museums.

Just outside the city walls, the Provincial Museum traces the history of many civilizations that have occupied the region. It is the oldest museum in Lecce, dating back to 1868. Pottery, stone carvings, and other ancient art are on display…and it’s free! Read Reviews!

Located in the heart of the old city, the building dates back to 1410 when it was used as a monastery. The MUST Museum houses contemporary art in expansive rooms with traditional arched ceilings. Modern paintings, wood and tin sculptures and commercial art are on display. Read Reviews!

Housed inside the Charles V Castle (which we get to next!), the Museo della Cartapesta, or Paper Mache Museum, celebrates the historic connection between the unique art form and Lecce. In the 18th century, many of the paper mache masters called Lecce home and took on students to teach the required skills.

Far from my childhood craft of using balloons and glue-covered strips of newspaper, the paper mache artists of Lecce, Italy use precise techniques to create stunning artwork. Many of the works were based on religion and were created for Lecce’s churches. Read Reviews!

Top Tip: The Paper Mache artform is a Lecce specialty. In addition to the Paper Mache Museum, guests interested in the art can visit one of the paper mache art galleries in the Lecce Old Town. For a hands-on experience, join an artist and create your own Paper Mache art in a Lecce Walking Tour and Paper Mache Workshop. Find out more!

The Lecce Castle was built in the 1540s, under the direction of Charles V. The new castle simultaneously incorporated and destroyed a previous Norman castle that dated back to the year 1137. Lecce’s Castello di Carlo V is designed as two separate rectangular-shaped buildings, one essentially ‘inside’ of the other for fortification. At one time, the castle was surrounded by a moat, with only two drawbridge entrances. The Port Royal entrance faced west and led into the city, while the ‘False’ Gateway faced east.

Through the years, Lecce’s Castello di Carlo V has undergone many changes, including its purpose. It has been used as a prison, military headquarters and now is used as a cultural center. The long hallways and vast rooms with vaulted ceilings no longer contain the furnishings the castle once did. Instead they house the aforementioned Paper Mache Museum and an art gallery. As the castle was under renovation, we were limited to wandering through only part of it, but we were still able to get a sense of its historic past. Read Reviews!

Discovered and excavated in the 1930s, the Lecce Roman Theater is one of the top things to see in Lecce. The ancient theater is reason enough to visit, but the small and informational on-site museum provides insight into the history of both Lecce and Roman theater productions.

The History of Via Appia

The first section of the museum focuses on Lecce’s Roman era. The museum details the famed road, Via Appia, which was built from 312 B.C. to 190 B.C. and used until the Medieval Age. The road stretched 350 miles from the Roman Forum to Brindisi. The road was lined with catacombs and great monuments that featured tall columns (one of which now stands in Sant’Oronzo Square in Lecce). In the museum, artifacts from the Appian Way are displayed – such as boulders from the road, a section of catacombs and mosaic artwork.

In the second section of the museum, the focus shifts to Lecce’s Roman Theater. Highlighted were the types of plays which would have been performed at the theater – Comedy, Tragedy and Satire – and the according masks and costumes.

Performances were often linked to religious celebrations and almost always included music. The theater itself was designed in three tiers in a semi-circle for acoustic purposes. A scaled model of Lecce, with the theater and amphitheater intact, helps to better visualize what the town once looked like.

Visitors are free to walk into the theater – including the stage and seating areas.

The Faggiano Museum in Lecce, Italy is the most fascinating museum in the city. Perhaps most intriguing is how the museum came to be; a homeowner of 30 years had sewer issues and upon digging up the floor he discovered historical evidence and artifacts dating back 2000 years. Realizing the significance of the findings, they transformed their home into a museum.

The Faggiano Museum in Lecce is located inconspicuously on a quiet street near the Roman Theater. All four levels of the home, officially a museum since 2008, can be explored. Glass plates and grates allow visibility into cellars, tombs, deep wells, secret hiding spaces and narrow underground passageways. Stairs lead down into cavernous cisterns and rooms carved out of stone.

History Found Inside the Faggiano Home

Evidence of occupation on the site dates back to the year 5 BC, when the area was inhabited by the Messapians. Artifacts found within the home are also linked to the time periods of the Romans, Middle Ages and the Renaissance. Findings show that the current building was used in the late 1500s as a convent, complete with a small chapel and dormitory. The underground ditches and rooms were used by the nuns during the burial process.

Salvaged pieces of tile, pottery and carved stonework provide a glimpse into the changes of style and detail over the years. Less like a museum and more like a treasure trove with a long history, this is the kind of museum we can get lost in.

It is just €5 for entry (buy tickets online), which includes an English pamphlet that provides short explanations to the numbered exhibits and tours are also available.

Use this link to Google Maps for an online version of our Lecce Map.

Looking for more tips for visiting Lecce? Use our complete guide to the Best Things To Do in Lecce, Italy!