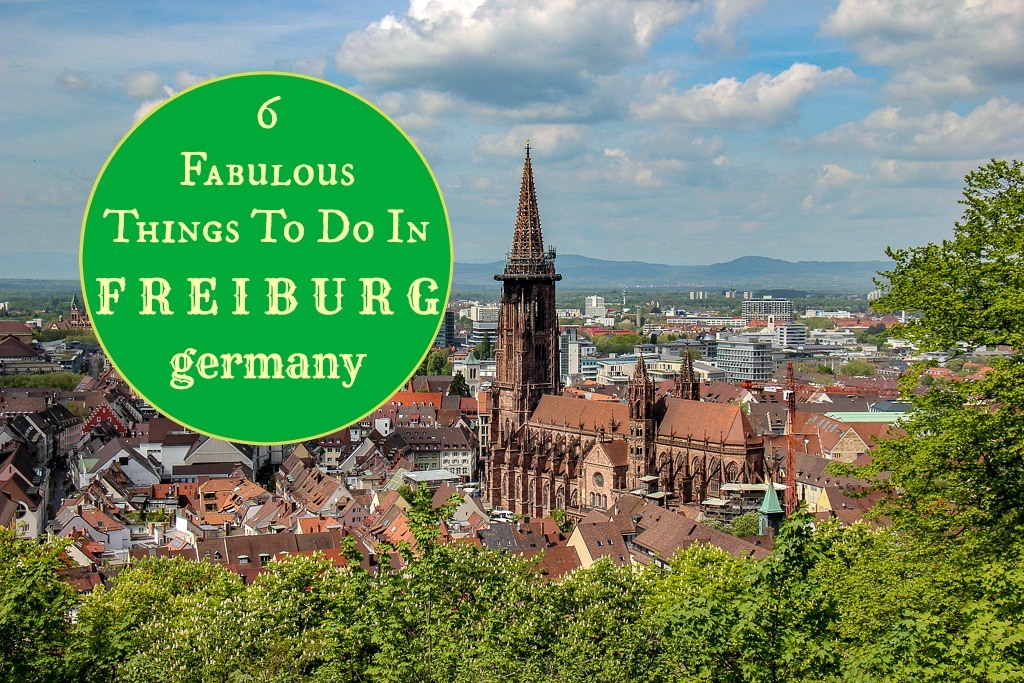 The first time we heard of Freiburg, Germany is when we were housesitting in Basel, Switzerland. Looking for an easy and entertaining day trip from Basel – where we could enjoy the beautiful spring weather, see a few historic sights and have an affordable meal in a restaurant (Basel is so expensive!) – Freiburg emerged as a suggested destination. On a sunny day, we traveled from Basel to Freiburg – and discovered 6 fabulous things to do in Freiburg, Germany.

Best Things To Do In Freiburg, Germany

Our list of things to do includes top Freiburg activities and sights that can be enjoyed with one day in the city. At the end of the post, we include a link to a Freiburg, Germany Map of Sights.

The city of Freiburg was established as a ‘Fortified Town of Free Citizens’ (a loose translation of the name Freiburg) in the year 1120. Although various rulers and wars have left their mark on the city, a preserved (and in some cases re-created) Old Town occupies the city center. Exploring the ancient cobblestone lanes is one of the top Freiburg things to do.

The historic Old Town is small and walkable, making Freiburg sightseeing enjoyable, rather than feeling like a task. During our time in the city, we literally stumbled onto many of the Freiburg attractions, but these are the ones you shouldn’t miss:

The Schwabentor Tower has stood in Freiburg since the year 1250 as part of the city’s fortifications. The city gate features a clock and two paintings. Facing the city is a picture of a merchant (which comes complete with a legend that the man came to Freiburg to buy the town with two barrels of gold, but when he arrived, he found out his wife had taken the gold and filled the barrels with sand). On the outside of the tower facing away from the city is a painting of St. George, the Patron Saint of Freiburg.

The Martinstor Tower officially dates to the year 1238, but research proves that the beams are even older, from the year 1202. The tower no longer features a painting (it was removed in 1951), but there is a clock, a plaque commemorating the burning of three witches in 1599…and (the unfortunately unmissable) McDonald’s sign.

In Freiburg, the Old Town Hall and New Town Hall sit next to each other on a pleasant square, Rathausplatz (which translates to Town Hall Square). The New Town Hall was built in the mid-1500s as a duplex house, used by the university for 300 years and in 1901 became the New Town Hall. The bright red Old Town Hall has been owned by the city since the 14th century and features several coats of arms. Part of the Freiburg Christmas Market is held on Rathausplatz.

Running along the Old Town lanes are narrow ditches of steaming water, known as Freiburg Bachle. Dating to the 13th century, the water was diverted from the Dreisam River as a source to battle fires and provide drink for livestock (but never for sewage). When the use for the bachle became obsolete, residents fought to keep the unique system of irrigation. Today, the water is said to keep the town cool in the summer. Kids play with boats in the bachle and, according to legend, anyone who steps in the water is destined to marry a local from Freiburg.

The Freiburg Munster – also spelled Minster – (or the Cathedral of Our Lady) is the Catholic cathedral at the center of the Freiburg Old Town. The incredibly detailed Gothic cathedral was built from 1200 to 1330. The spire reaches 380 feet into the sky and hanging inside are 19 bells (the oldest dates to the year 1285). Although Freiburg was heavily bombed in 1944, the church suffered little damage. The church is open (and free!); taking a look inside is one of the top things to do in Freiburg, Germany.

The square surrounding the church, Munsterplatz, is home to the Freiburg market (except on Sundays). Flowers, produce and hand-crafted toys are sold from stalls on both sides of the cathedral. On the north side of the church there a long row of vendors selling tasty local sausages. On the south side of the square is the blazing-red Historical Merchant’s Hall – one of the most beautiful buildings in Freiburg.

#3 Hike in the Freiburg Black Forest

The city is nestled at the base of Schlossberg (or Castle Hill), a hill on the western edge of the German Black Forest – which means Freiburg hiking is only steps away from the historic Old Town. The main Black Forest attractions include paved and dirt trails that crisscross through Schlossberg, leading to scenic viewpoints and castle remains. However, one of the best things to do in the Black Forest is hike to (and up) the Schlossbergturm, a 114-foot-tall observation tower that provides 360-degree views of the region.

We took a break from sightseeing Freiburg and started our Freiburg Black Forest Hike from the southwest corner of Schlossberg (near the Schwabentor Tower). Most of the trails were not marked, but there were picture plaques of the Schlossbergturm with arrows to guide our way. I completed the hike in flip flops, which isn’t advised. If I had been wearing better shoes, we would have hiked more trails, as the Black Forest was one of our favorite places to visit in Freiburg!

Other Freiburg places to visit for a dose of nature – without hiking the Black Forest from Freiburg – are Colombipark, Stadtgarten, Seepark and the Freiburg Botanical Garden. Visitors who prefer not to hike, but still want to walk in the Black Forest, can take the Schlossbergbahn, a funicular railway that links the Old Town to the forest.

Although some may think visiting a cemetery is spooky, visiting the Alter Friedhof (or Old Cemetery) is definitely one of the top Freiburg, Germany things to do! Residents were buried in the cemetery from 1683 until 1872. The gravestones range from simple and modest to detailed sculptures. Both the history and the art are what makes the cemetery one of the Freiburg tourist attractions.

We took our time strolling through the cemetery and looking for dates on the longstanding headstones. We noted how some were crumbling and covered in moss and other graves were in pristine condition. While we were at Alter Friedhof, we noticed many locals enjoying the cemetery as a park by walking their dogs and having picnic lunches.

#5 Drink Beer at a Freiburg Brewery

Ganter Brauereiausschank – The Ganter Brewery is a family-run business that was founded in Freiburg in 1865. The brewery, where they offer tours, is on the outskirts of town (which can be easily seen from the top of the Schlossbergturm) – or there is a Ganter Brewery Bar located on Munsterplatz where guests can get a taste of the classic Freiburg Beer in a traditional setting.

Martin’s Brau – Martin’s Brew opened in 1989 in the Freiburg Markthalle. In addition to the standard beers produced at Martin’s Brau, they also make small-batch, seasonal specialties.

What goes best with German beer? German food, of course! And there are many Freiburg, Germany restaurants serving delicious, hearty German meals. Some of the menu items we were searching for while in Freiburg were Brezels (soft pretzels), Spatzle (noodle dish), Flammkuchen (thin pizza) and Sausages with Kraut.

We coordinated our sightseeing in Freiburg, Germany to be at the cathedral at lunchtime. We joined both tourists and locals for one of the locally famous ‘Lange Rote’ – a foot-long sausage served in a baguette with sautéed onions – from the food stalls on the north side of the church. In the early evening, we snacked on brezels while sipping our beers, but were ready for dinner when we sat down at Martin’s Brau. Disappointed to see that Flammkuchen was not on the menu, we opted for the local Spatzle Freiburg-style (with bacon, onions and beer sauerkraut) and farmhouse sausages (because there is no such things as too many sausages when in Germany!).

For visitors who are less enthusiastic about traditional German fare, the Freiburg Markthalle is the place to go to eat international cuisine. With a food court atmosphere, guests can choose from dishes around the world.

Looking for the best restaurants in Freiburg? Check out the reviews for Freiburg restaurants on TripAdvisor.

Use this link to Google Map to find all of our Top Things To Do In Freiburg, Germany!

Top Tips for your Trip to Freiburg, Germany

If you want more ideas of what to do in Freiburg for a day, make the Freiburg Tourist Information Office your first stop in the city. They offer a free Freiburg Tourist Map – or one that costs 1 euro and includes an outlined walking route along with Freiburg facts. The Freiburg Tourist Office is located in the Old Town Hall on Rathausplatz (use this link to Google Maps to find the office). For more Freiburg tourist info, visit the official website.

In addition to the things to see in Freiburg, there are also many places to shop. Coming from Switzerland, where prices are exorbitant, we spent some time at the shops in Freiburg where we could pick up a few items at a lower cost. However, since we were taking the Freiburg to Basel train rather than driving, we had to be sure we could carry it all home!

How to get to Freiburg, Germany

Looking for an airport near Freiburg, Germany? The EuroAirport Basel Mulhouse Freiburg is the closest airport to Freiburg, Germany…and is located 29 miles away in Saint-Louis, France. Search for the best fares on airline tickets at SkyScanner.

The Freiburg Train Station is located west of the Old Town (but within easy walking distance). Well-connected to other cities, day trips from Freiburg are easy to organize. Search schedules for Freiburg day trips to nearby cities:

Where to Stay in Freiburg, Germany

Visitors staying for longer than one day will find that there are many accommodation options of where to stay in Freiburg in – or close to – the city center. Check to see if there are rooms available at these highly-rated hotels: Motel One Freiburg, Colombi Hotel, Hotel Oberkirch – or start searching for hotels on Booking.com.

Start planning your trip to Freiburg, Germany! Search for the lowest airfares, the best accommodations and fun things to do…then start packing!  Want more travel planning tips? Head over to our Travel Planning page for more information and tips on traveling – and for country-specific information, take a look at our Travel Guides page!