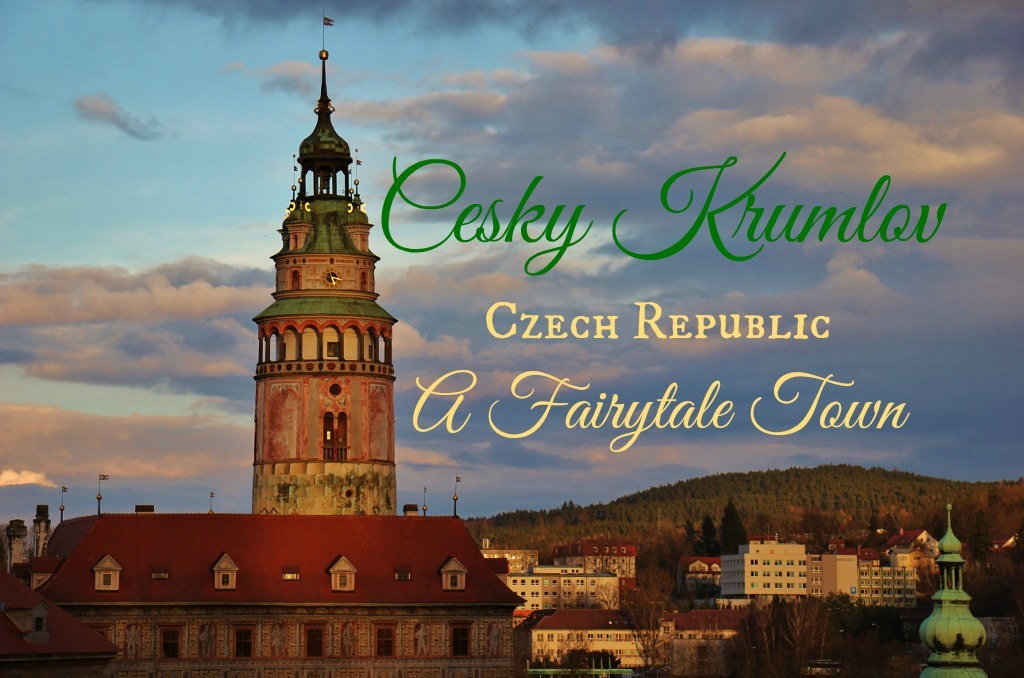 Once upon a time in the land of Bohemia, there was a beautiful town nestled on the banks of a curving river. On top of a craggy hill was a mighty castle where the royal family lived. Through the centuries, the town retained its medieval appearance; it escaped destruction by war or natural disaster. Today, that pristinely preserved town – Cesky Krumlov, Czech Republic – invites visitors to step back in time onto cobblestone streets and walk the same paths of those from long ago.

Take a walk with us on our route through the fairytale town. We begin in the Town Square, then stroll along the riverbanks before making our way up to the iconic Krumlov Castle. Map below.

At the heart of the Old Town in Cesky Krumlov is the expansive Town Square. Ringed by cheerfully-painted buildings, our eyes are drawn to the center of the square, where a Plague Column and fountain stand. A public fountain has graced the Town Square since 1577, although, the current stone fountain dates to 1843. The Plague Column – topped with a golden statue of Mary and surrounded by eight patron saints – was erected in 1717 in remembrance of those who died during the epidemic in the 1680s. Map: A – Town Square

The street plan of the Old Town below the castle was developed in the 13th century and was first mentioned as a settlement in the year 1274. On the cobblestone streets that curve with the bend of the Vltava River are historic buildings, which are now occupied by hotels, museums, restaurants, art galleries and tourist shops. Map: B – Kajovska St

The landmark St. Vitus Church, which stands on a slight incline on the south side of the Old Town, exemplifies the balance of power between church and state. Built in the 14th century – and renovated many times since – the church is home to 15th century paintings, a 17th century altar, a 16th century organ and the tombstone of Wilhelm von Rosenberg. The neo-gothic church spire was added in the 19th century. Map: C – St. Vitus

The small St. Martin Chapel sits in the Town Park (Mestesky park) south of the Old Town. Built of wood in 1585 as a cemetery chapel, it was reconstructed in 1717. In 1892, the graveyard was relocated and the land was converted into a park. Today, the chapel occasionally hosts choir concerts. Map: D – St. Martin

The impressive Cloak Bridge – a three-story, stone bridge standing on massive arches – connects the castle complex to the Castle Gardens and Theater. Originally built as a wooden bridge in the 15th century, it was reconstructed four times in less than a century…but has changed little since 1777. Map: F – Cloak Bridge

The Lazebnicky Bridge crosses the Vltava River, connecting the Old Town to the Krumlov Castle complex, which sits on a rocky bluff. The Upper Castle, which was built directly into the rock during the 13th century, was part of the original castle that belonged to the Witigonen family, also known as the Lords of Krumlov. The Witigonen royal line ended in 1302 and all property transferred to the Lords of Rosenberg, who decided to settle in Cesky Krumlov – and reigned there for 300 years. Map: G – Upper Castle

The Little Castle and Castle Tower are perched high above the Vltava River and are the oldest part of the Krumlov Castle complex, dating to the first half of the 13th century. Originally designed in the gothic style, the castle was converted into a Renaissance residence in 1581. The tower was extended in height in the 14th century and was decorated with paintings in the year 1590. In the 1990s, the tower underwent renovations to revive the mural paintings. Map: H – Castle Tower

The cobblestone street that leads to the Krumlov Castle is flanked by exquisitely preserved dwellings. The well-maintained historic core of Cesky Krumlov, Czech Republic has earned the honorable status of a UNESCO World Heritage Site. Map: I – Latran St.

The stone bridge and gate –  original protective feature of the Gothic castle – lead from the 1st Courtyard of the castle into the 2nd Courtyard where the Little Castle and Tower stand. A wooden drawbridge crossed the moat until 1760 when it was replaced by the stone bridge and the statues of Mary and Joseph. Bears roam the moat below the bridge, just as there have been since 1707 (however, they were not out during our visit). Map: J – Gate and Moat

In Cesky Krumlov there is no structure more iconic than the Castle Tower. Standing at 178-feet-tall, the tower rises 280 feet above the Vltava River. There are four bells in the tower, two of which were cast in the year 1406. Map: L – Lookout Point

The letters on the map indicate where each photo was taken.

Our Top Tips For Your Trip To Cesky Krumlov, CZ

How To Get To Cesky Krumlov

Cesky Krumlov is about 100 miles south of Prague, which takes about 2.5 hours by car or 3 hours by bus. We opted to take a bus and traveled with Flixbus, which was easy, affordable, clean and included on-board wifi, coffee and toilets. Private transfers are also available. If staying in Prague, there are also organized Cesky Krumlov day trips, overnight trips and 3-day tours of the region.

Where To Stay In Cesky Krumlov

During our visit to Cesky Krumlov, Czech Republic, we stayed in a comfortable and affordable hotel, Pension Rosa. However, there are many hotels to choose from in Cesky Krumlov that are in – or close to – the city center. Check out these top-rated hotels (based on guest reviews!) for your upcoming trip:

Where To Eat In Cesky Krumlov

More To Do In Cesky Krumlov

Before You Go To Czechia

Looking for more Czechia travel planning tips? Read about the Best Viewpoints In Prague and where to taste Prague’s Best Beer! Also click over to our Travel Planning page for our complete guides to other top destinations worldwide and review my packing list and other travel resources!

We want to know: Have you been to Cesky Krumlov, Czech Republic? If not, is it a place you want to visit? Tell us in the comments!