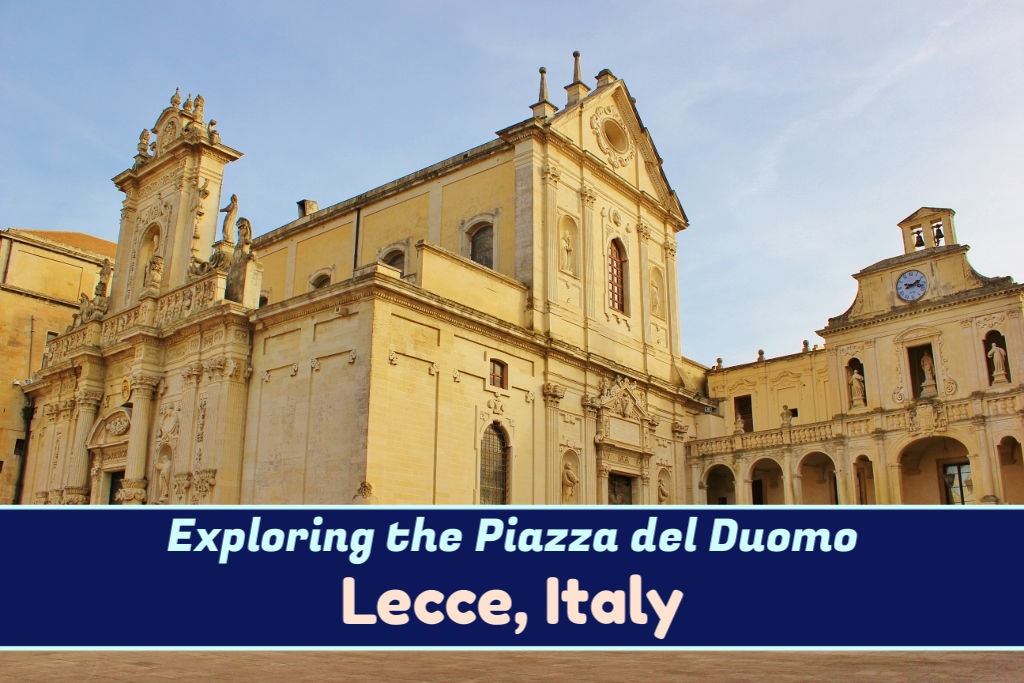 The historic Piazza del Duomo in Lecce, Italy is the most beautiful square in the city! Acting as the religious center of town, The Lecce Piazza Duomo is home to some of the most ornately decorated Baroque buildings in Lecce. Unlike most European city squares, the Lecce Piazza del Duomo is enclosed on three sides. The grandiose square is accessed on the north side through a narrow entrance from the main street, Libertini.

The somewhat hidden square features sensational architecture and some of the most iconic buildings in the city. The four main structures on the square are the Lecce Duomo Cathedral, the Bishop’s Palace, the Seminary and the soaring bell tower.

Top Tip: While the incredible details of the opulent architecture are best seen in daylight, the square is equally impressive at night!

The Lecce Duomo is the main attraction on the square – and an absolute must-see for Lecce visitors.

The first church to occupy the site was built in the year 1114. The church underwent renovations and additions in 1230, but was not fully embellished in the Baroque style (which remains today), until the mid-1600s.

Unlike most churches, the Lecce Cathedral has two extensively decorated facades. The main entrance, which fronts the square and is the more grand of the two, features columns, sculptures and floral carvings. The second facade, which faces west, honors Oronzo, the Patron Saint of Lecce. Both feature the quintessential Leccese style of architecture.

Top Tip: The Duomo Cathedral can be visited for a small fee – and we highly recommend going inside!

The Bishop’s Palace (or Episcopio) was designed as a background to the square. First built in the 15th century, the palace endured a 50-year reconstruction that was completed in 1639. However, it was in 1758 that the ornamental facade and clock were added.

The seminary (or seminario) is considered by many to be the finest Baroque architecture in all of Lecce. Designed by Giuseppe Cino and completed in 1729, the enormous building takes up the entire western length of the square. The windows and columns provide balance, enhanced by fine sculpting.

The 230-foot-tall bell tower was built by Giuseppe Zimbalo (who also built the cathedral) and was completed in 1682. It soars five stories into the sky, adding dimension and an air of dominance to the square. It has been used as a watchtower, but is also representative of the Bishop’s power in Lecce.

We want to know: Have you visited the Piazza del Duomo in Lecce, Italy? What were your impressions of the Lecce Duomo Square – and how does it compare to other similar Cathedral squares have you been to in Europe? Tell us in the comments!

Looking for more Lecce tips? Check out our complete list of Things To Do in Lecce, Italy!

7 thoughts on “Exploring The Piazza del Duomo In Lecce, Italy”