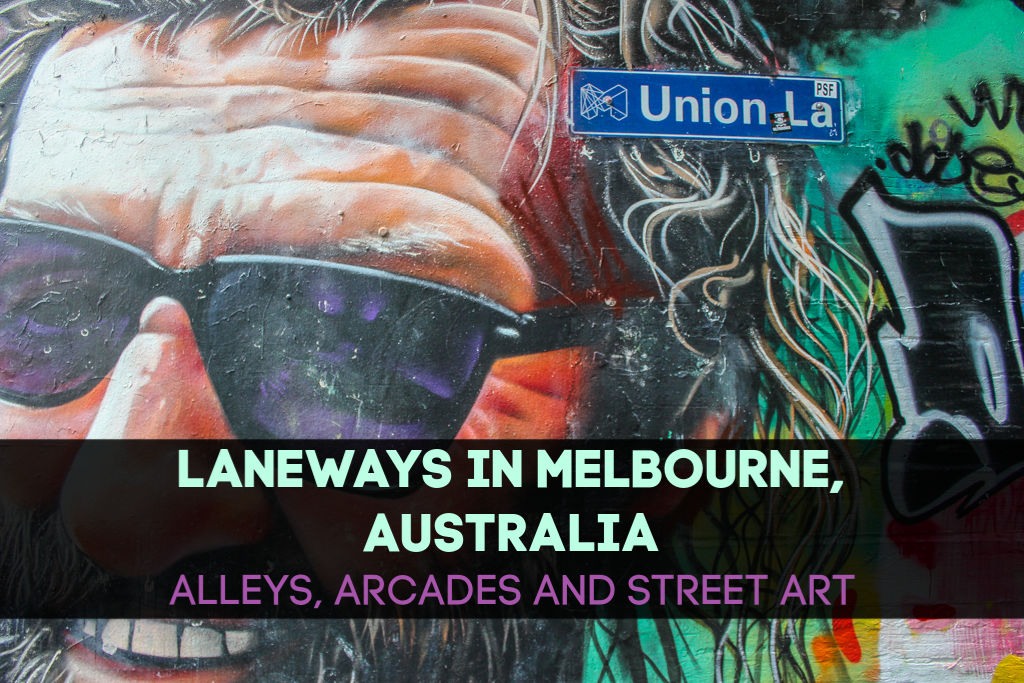 Laneways in Melbourne, Australia are local hangouts and tourist hot spots. The unique Melbourne alleys are a fascinating side to the city – and proof that the fashionable metropolis is constantly reinventing itself. From the hip Melbourne graffiti alleys to the posh shopping arcades to Melbourne laneway restaurants that offer atmospheric alfresco dining, the Laneways of Melbourne are must-see!

There is a tangible energy in Melbourne’s central business district, where historic pubs and modern skyscrapers coexist and a steady stream of trams transport people down the main thoroughfares. We learned early on to explore beyond the major streets in order to get a good look at the riveting culture that lies in the laneways in Melbourne. The alleys, arcades and street art we found were mesmerizing – and discovering what lies in the depths of them one of the best things to do in Melbourne!

History Of Laneways In Melbourne

The Melbourne Laneways History is an intriguing tale of city planning. In 1837, Melbourne’s street plan was laid out in a grid. The pattern of major and minor streets alternating (99 feet and 33 feet wide, respectively) resulted in blocks of 20 parcels of land. As building commenced on the streets, alleys (or laneways), between the buildings provided delivery entrances and a space for rubbish collection.

In most cases, the laneways were hidden from the public eye; only in a few instances were shop entrances located on the laneway. The Melbourne Arcades – which are covered and feature magnificent architecture – are designed specifically as shopping laneways and were part of the original city plan.

As time progressed, some buildings were remodeled (or rebuilt all together) and the shifting boundaries eliminated the laneways. However, many lanes remain where building facades were altered, but not the dimensions of the building. The outcome is a maze of hidden lanes that are used for a variety of purposes.

For a period of time, the dark laneways in Melbourne were far from inviting. In the 1990s, however, there was a campaign to revamp the forgotten Melbourne lanes. Art galleries, shops, restaurants and bars have taken up residence in the laneways and have re-purposed the once seedy space.

New life has been breathed into the lanes creating atmospheric shopping, dining and drinking experiences. In the barren lanes that are too narrow or unable to host shops and restaurants, the walls are now used as canvases for street artists; the graffiti laneways in Melbourne are distinctive and impressive.

Exploring the lanes in Melbourne is an excellent way to experience the city. We walked down the Melbourne graffiti lanes as if they were fine art museums. We savored the Melbourne coffee culture at laneway cafes and relished alfresco dining in Melbourne hidden streets. Now, we are sharing our top tips for what to see and do in the Melbourne Arcades and Lanes.

Pro Tip: Most laneways are not marked on the free tourist map (a small Laneways brochure is available though), but we were never shy to detour into the narrow alleys, which led us to all sorts of gems. To help fellow travelers, we include a Laneways Melbourne Map at the end of that post that is marked our favorite spots.

Some of the best bars, cafes and restaurants are hidden in the Melbourne laneways. We are highlighting a few of our favorite lanes in Melbourne for dining and drinking.

Hardware Lane was one of the first laneways in Melbourne converted into usable space in the 1980s – and it was done so with a flair of European ambiance. For most of the day (11am-11pm), the brick street – which runs from Bourke Street to Lonsdale – is closed to vehicles and tables spill out into the street from Hardware Lane cafes and restaurants.

Hardware Lane Melbourne restaurants sit side-by-side and eager managers from each establishment attempt to entice passersby to take a seat at their tables. With the heavenly scent of garlic and tomato wafting through the air, we couldn’t pass by the popular Max on Hardware restaurant for a taste of Italy. We dined alfresco and indulged in scrumptious Italian fare.

Pro Tip: Looking for the best Hardware Lane bars? Campari House, Kirk’s Wine Bar and Golden Monkey all get rave reviews. Top Hardware Lane cafes are actually on Hardware Street (which is a continuation of Hardware Lane north of Lonsdale). Hash Specialty Coffee is highly touted as one of the best breakfast and brunch spots in the city.

Situated in the city’s Financial District, Bank Place Laneway is a historic gem, with most buildings dating to the late 1800s and early 1900s.

To travel back in time, we went to The Mitre Tavern on Bank Place. It’s the oldest building in all of Melbourne and has retained its historic appeal as the city has literally grown up around it. Originally built as a private residence, the first liquor license was issued in 1868. Today, businessmen huddle around tables with an after-work pint. We joined the Tuesday night trivia and our team, The Best Yank Trivia Team in the Southern Hemisphere, came in dead last, but that didn’t take away from our good time.

Tucked deep into the best laneways in Melbourne are fun theme bars – which seem to be a Melbourne specialty. The odd and eccentric establishments add an extra touch of entertainment to an already thriving bar scene.

On Corrs Lane, the speakeasy-style Berlin Bar will make you feel as if you have been let in on an incredible secret. The bar’s east-versus-west décor is a visual representation of Berlin during the Cold War. Rather than choosing just one side, we had drinks in both sections.

For a truly bizarre and fun night out, however, The Croft Institute at the end of Croft Alley is must-visit. The insane asylum laboratory themed bar is accessible down a dark laneway and the fantastic craft cocktails are stirred with syringes rather than straws.

The arcades in Melbourne differ from Laneways, as they were purposely built for shopping. The Melbourne Arcades are for pedestrian use only and exude a refined character with tiled floors and natural sunlight filtering through the glass ceiling. In the Melbourne Shopping Arcades, rather than urban bars, there are fancy cafes, extravagant chocolate shops, artist galleries and boutique clothing stores.

Only a few original shopping streets have been preserved and are still used as originally intended. Two of the oldest Melbourne arcades, Block Arcade and Royal Arcade, were developed in the late 1800s – and remain as luxury shopping streets today.

The Block Arcade shops lane was completed in 1893 and is a striking example of Victorian era architecture. Lined with specialty shops featuring local products, the Hopetoun Tea Room Block Arcade Café lures many shoppers in for a sweet treat. Although there are likely to be long queues, the elegant tearoom is one of the Block Arcade restaurants that is not to be missed!

Built in 1869, the grand Royal Arcade Melbourne features high-end fashion stores and chic coffee shops. The shops are well-known for their gorgeous window displays – however, don’t forget to look up to see the mythical characters, Gog and Magog, who stand guard at the clock (which chimes on the hour!).

Pro Tip: Both of these Melbourne Arcades are featured in our Free Self-Guided Melbourne Walking Tour…as are the most famous Melbourne Graffiti Laneways, which we detail next!

Not all laneways in Melbourne have been converted into trendy enclaves filled with eating and drinking establishments. Instead, many of the brick walls of the back alleys have become a place for street artists to share their work.

Entire laneways are covered in spray paint, stencil work and murals. But, it’s not technically graffiti (which is still illegal in the city); they are commissioned works of art. Through applications and permits, building owners can offer their walls for painting. The Melbourne laneway art features some of the best street art murals in the world.

The Melbourne laneway graffiti is constantly changing – especially on walls that can be reached without scaffolding. When a street art mural is painted over, it is lost forever – but the continually creative nature of street art only enhances the dynamics of the laneways in Melbourne.

Hosier Lane is the most well-known graffiti Melbourne laneway – and it is seldom void of people. Not only are creators – armed with cans of spray paint and stencils – often found on the famous Melbourne art street, but also locals, tourists and tour groups who come to see the current artistic displays. 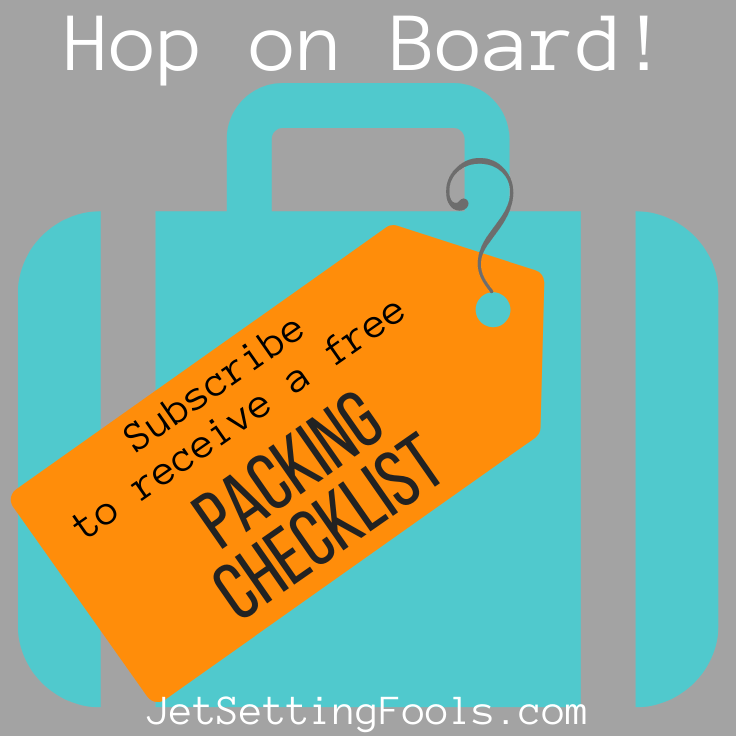 As we already mentioned, visitors can pick up a Laneways Melbourne Map at the tourist information center. Our Melbourne City Lanesways Map is marked with our recommended spots.

A great way to get an introduction to the best Laneways in Melbourne is to join a local tour guide. While visitors are certainly free to explore on their own, guides share their favorite spots and hidden gems.

On this small-group Lanes of Melbourne tour, participants learn more about the history, architecture and Melbourne street art scene. Included in the tour is a cup of coffee at a laneway café – and there is an option to upgrade to a gourmet lunch with wine, too! Reserve your space!

Guided by a local, participants will visit four of the best Melbourne Laneways bars – sipping craft cocktails, regional wine and local beer along the way. A fun way to meet fellow travelers, participants on the tour will also get insider tips into the nightlife scene. Book it now!

The St. Jerome’s Laneways Festival Melbourne began in 2005 when local musicians closed Caledonian Lane for a summer concert series. The event – a huge success – has evolved into one of the top indie music festivals in the city and now takes place in multiple Australian cities. Find more info on the official website.

Looking for more tips of what to see and do in Melbs? Use our ultimate guide to the Best Things To Do in Melbourne!

We Want To Know: Have you ventured into Melbourne alleys, arcades and graffiti laneways? What are your favorite spots or hidden gems? Give us your best tips in the comments!

Read more about Melbourne: We also have detailed guides for a Self-Guided Melbourne Walking Tour, Free Things To Do In Melbourne, Queen Victoria Market and the Great Ocean Road!

Start planning your trip to Melbourne, Australia! Search for the lowest airfares, the best accommodations and fun things to do…then start packing!  Want more travel planning tips? Head over to our Travel Planning page for more information and tips on traveling – and for country-specific information, take a look at our Travel Guides page! 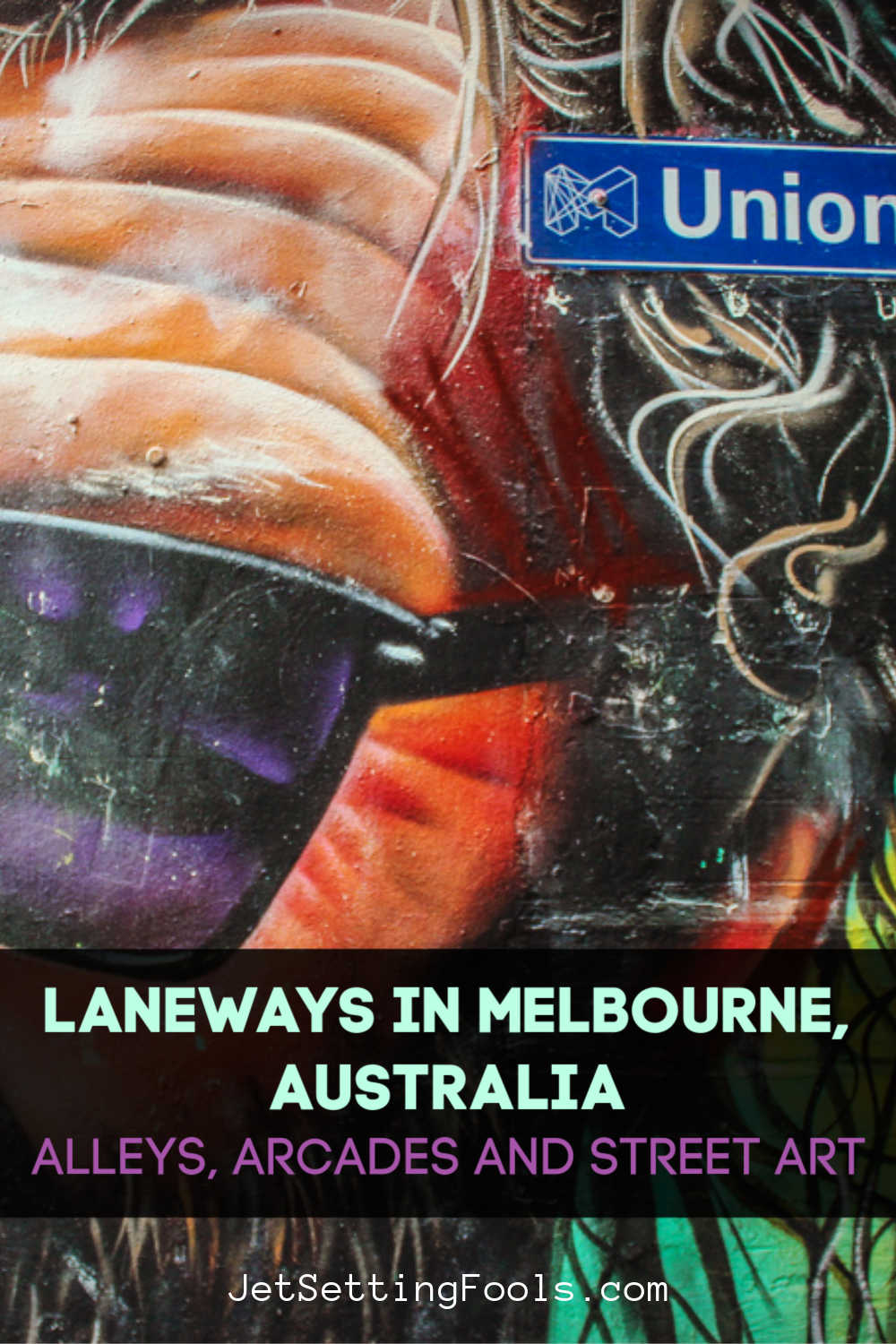 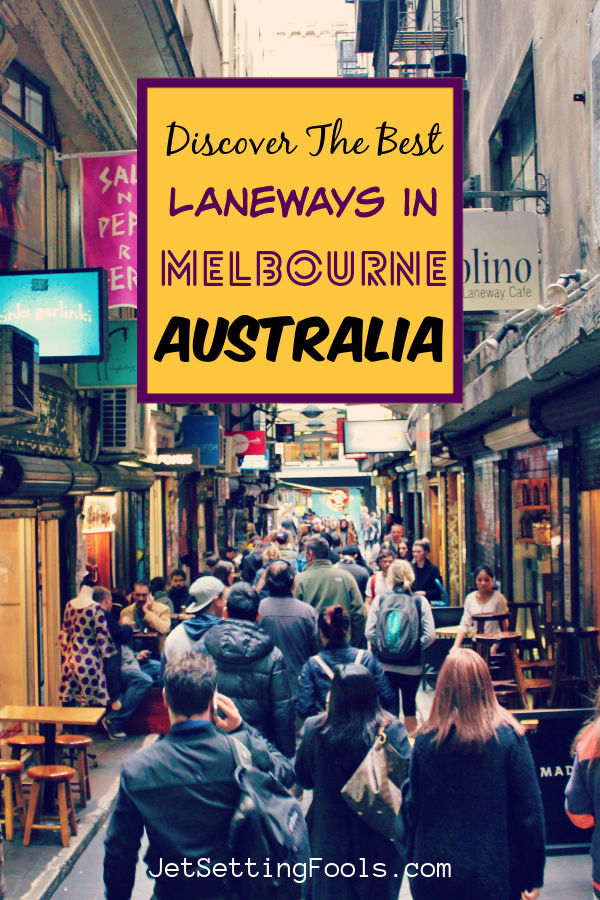 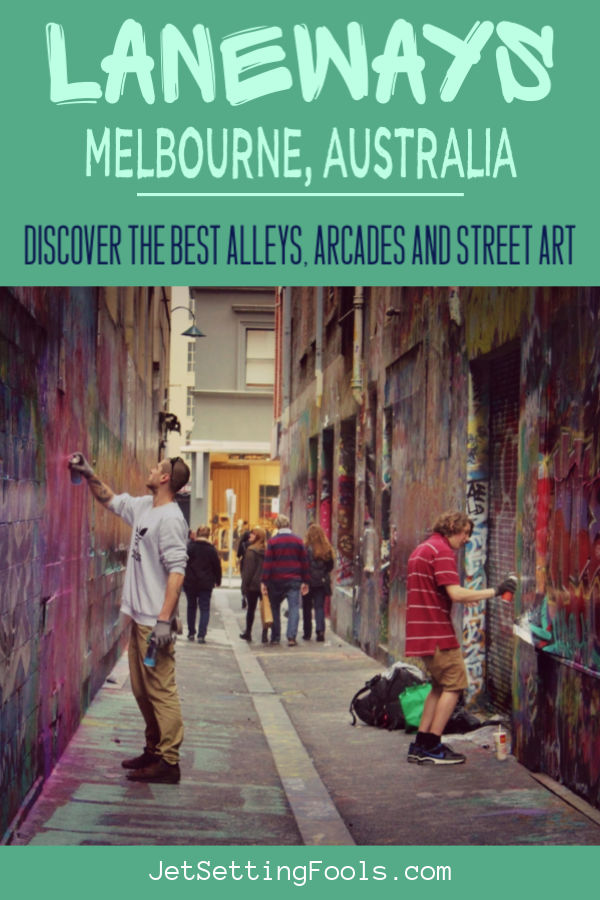 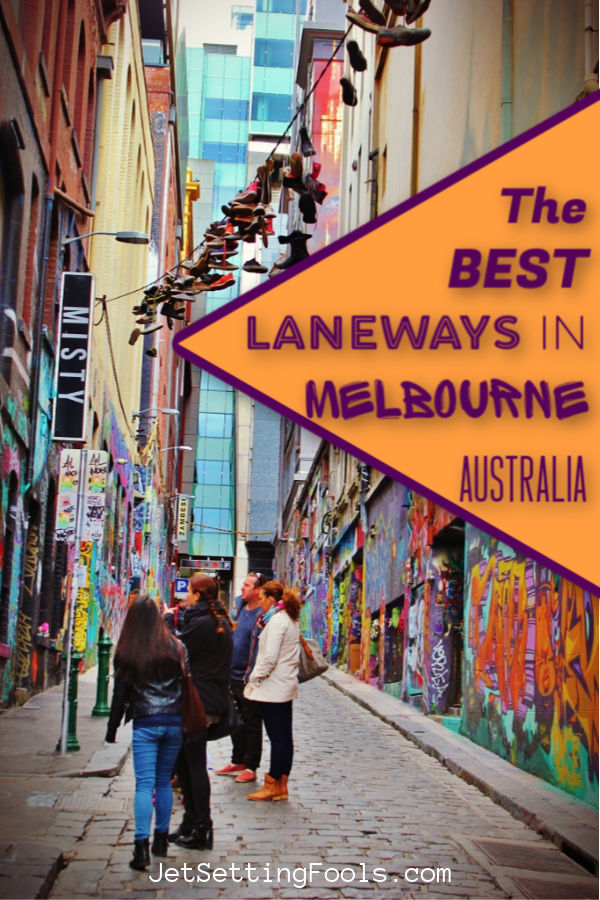 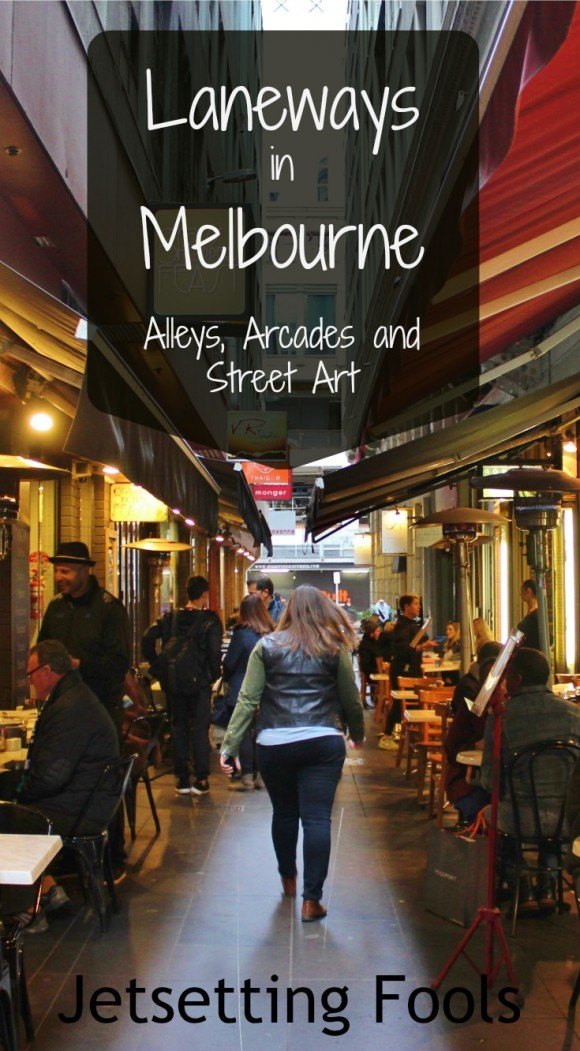