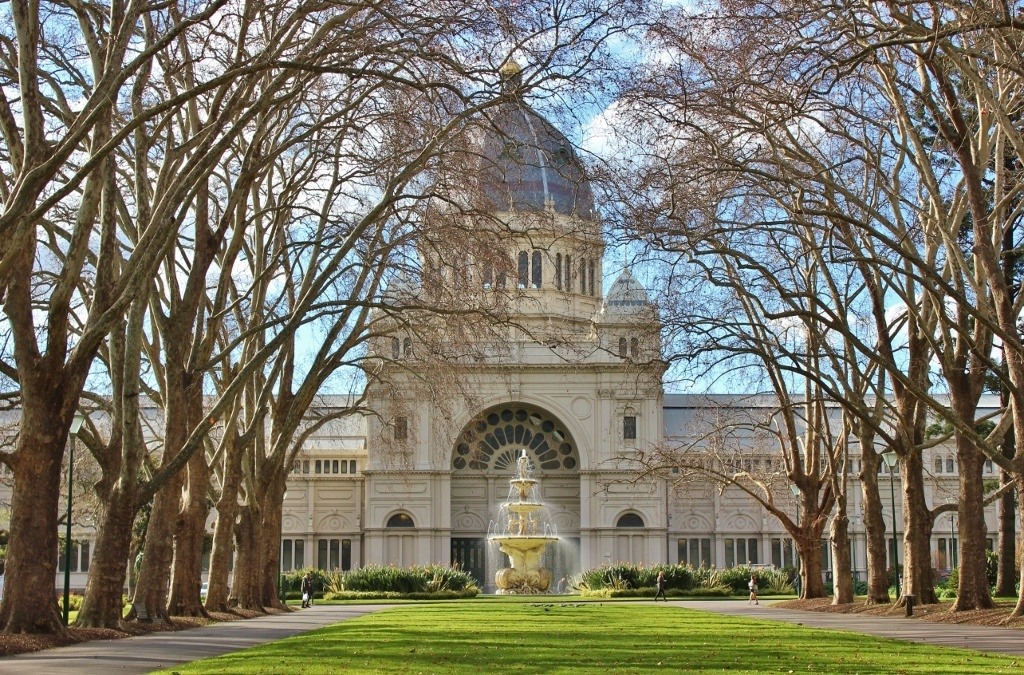 My first glance at a map of the Melbourne CBD was a little overwhelming. There is quite a lot of ground to cover in order to see the many sights. However, when we hit the pavement, we found Melbourne to be a very walkable city…as long as we were in comfortable shoes. With just a few hours, an ambitious person could easily complete this self-guided walking tour of Melbourne; with added detours and stops, it can be done in a day. 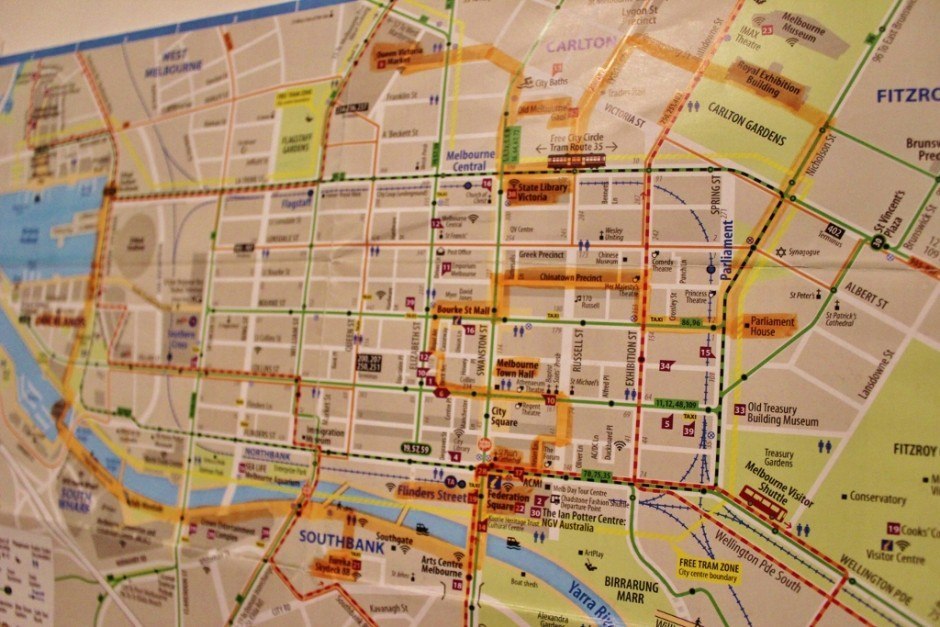 Start at the Queen Victoria Market. 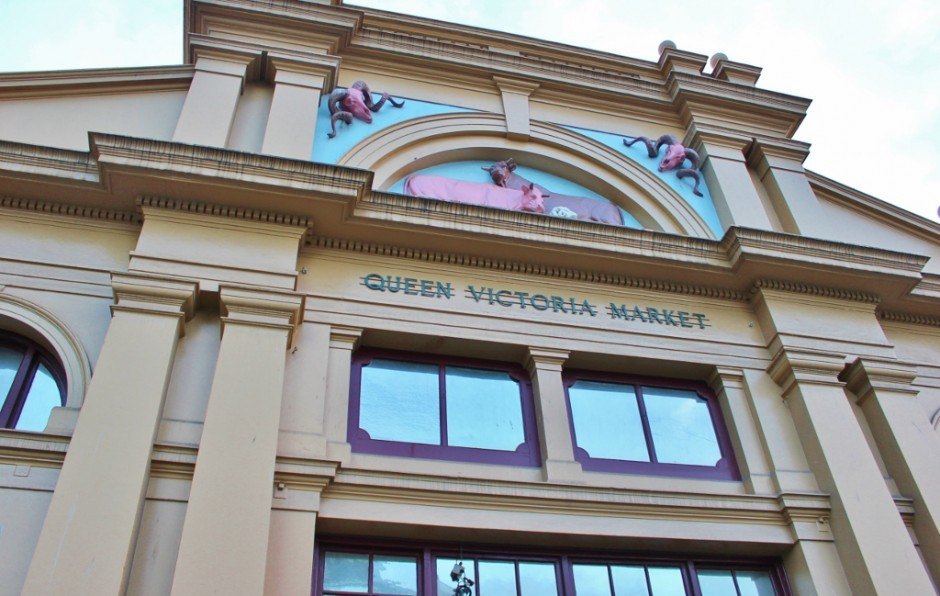 The historic market has been in operation since 1878 and is now spread over two city blocks, so allow some time, grab a coffee to go and peruse the stalls. Besides the fresh produce market, there is an indoor deli, outdoor general merchandise market and several permanent stores around the perimeter. 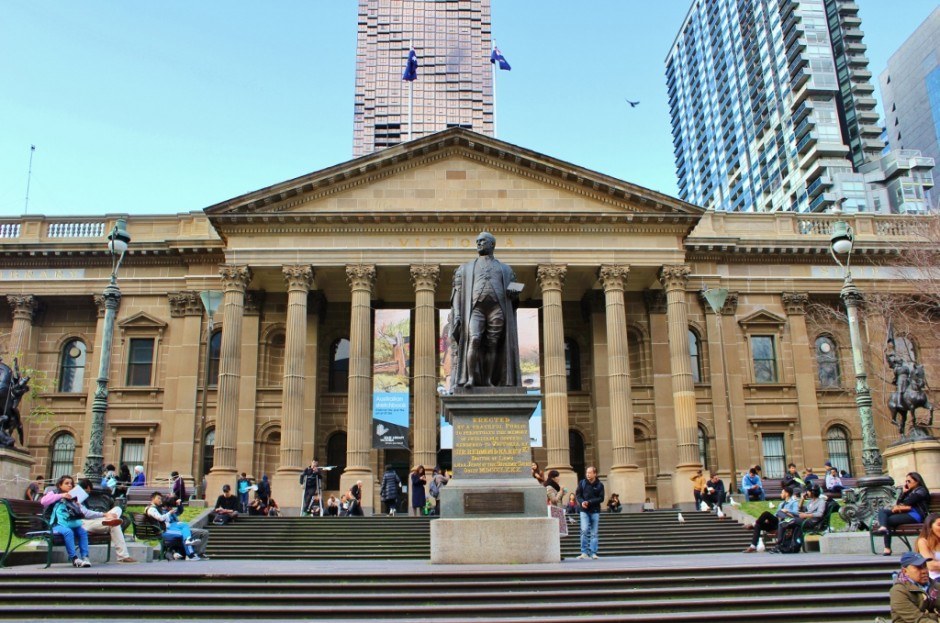 The State Library of Victoria was first opened in 1856 and has been growing ever since, now holding a collection of more than 2 million books, art galleries and historical exhibits. A stroll around the domed reading room, a view of the room from above on the balcony and a peek at the Ned Kelly exhibit is well worth the time. 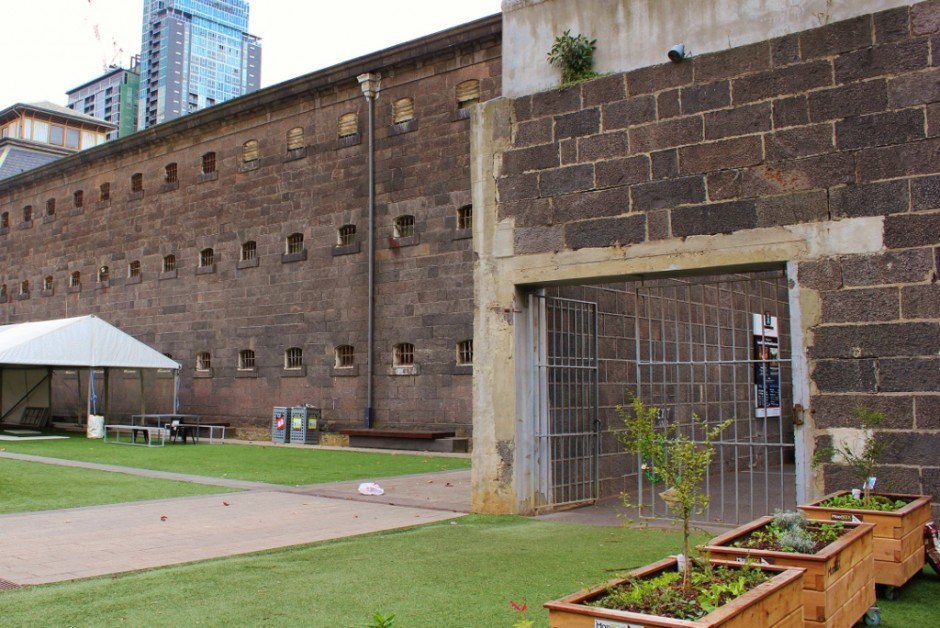 For slow learners, like myself, this is the Old Melbourne Jail. It operated from 1842 until 1929 as a prison and where criminals who were sentenced to death were hanged, including the (in)famous Ned Kelly. 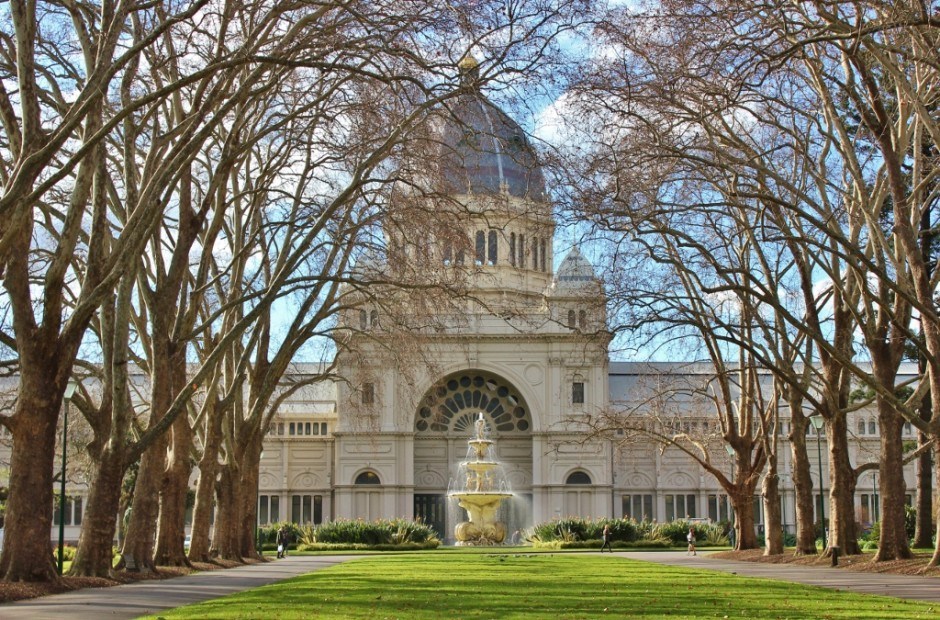 Designated a park in 1839, the 64 acres are nice for a stroll. Aim for the center of the park and the Royal Exhibition Building. Built in 1880 for the Melbourne International Exhibition, it was also used by Parliament in 1901. It was set to be demolished, but was saved and remodeled in the late 1990s. In 2004, it received UNESCO World Heritage status. 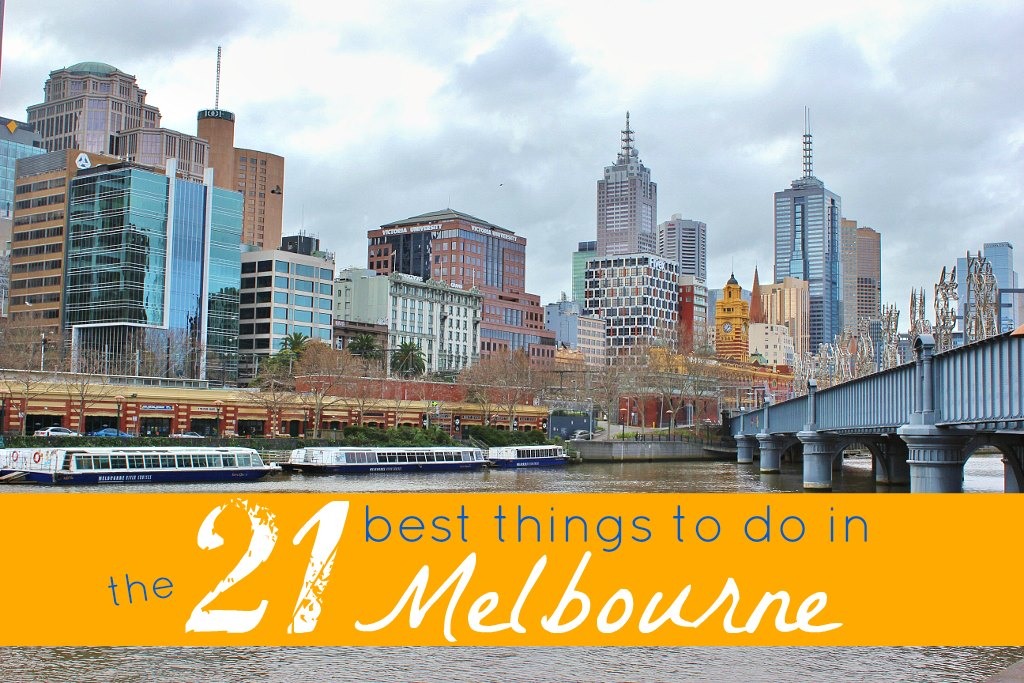 The 21 Best Things To Do In Melbourne, Australia

Continue walking east to Nicholson Street and head south to Parliament, passing the Parliament Gardens and view of St. Patrick’s Cathedral. On the other side of the street in the Princess Theater. Continue south to the steps of… 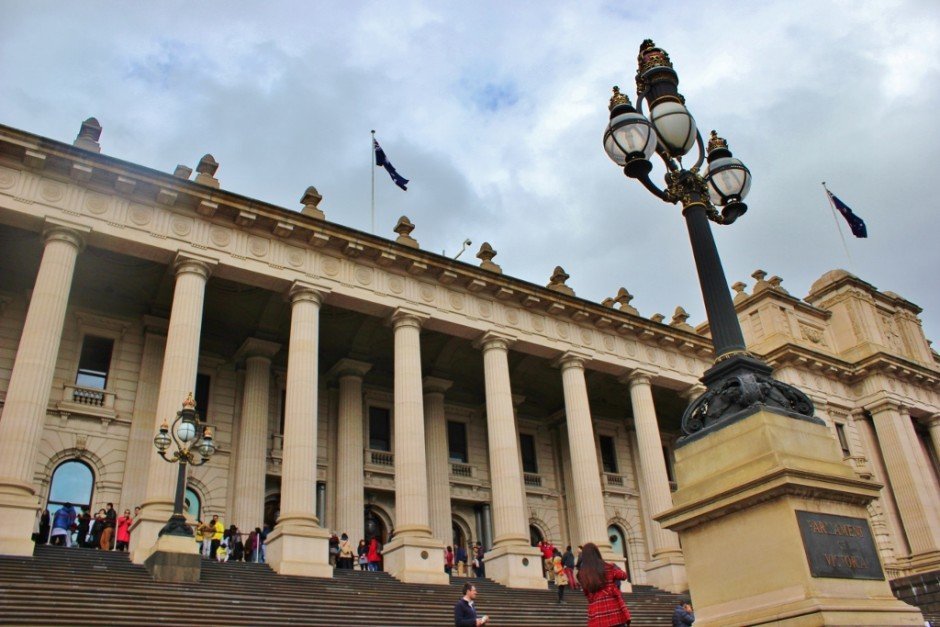 The Parliament House was built between 1856 and 1930 and is where both houses of Victoria’s Parliament – the Legislative Assembly and Legislative Council – still meet today. The interior can be seen by guided tour on non-sitting days or from the public gallery when Parliament is in session.

For architecture and gold lovers, make a little detour and continue south to the Old Treasury Building. For those short on time, cross Parliament Street to Bourke Street and head west to Exhibition Street. Go north to Little Bourke and head west into… 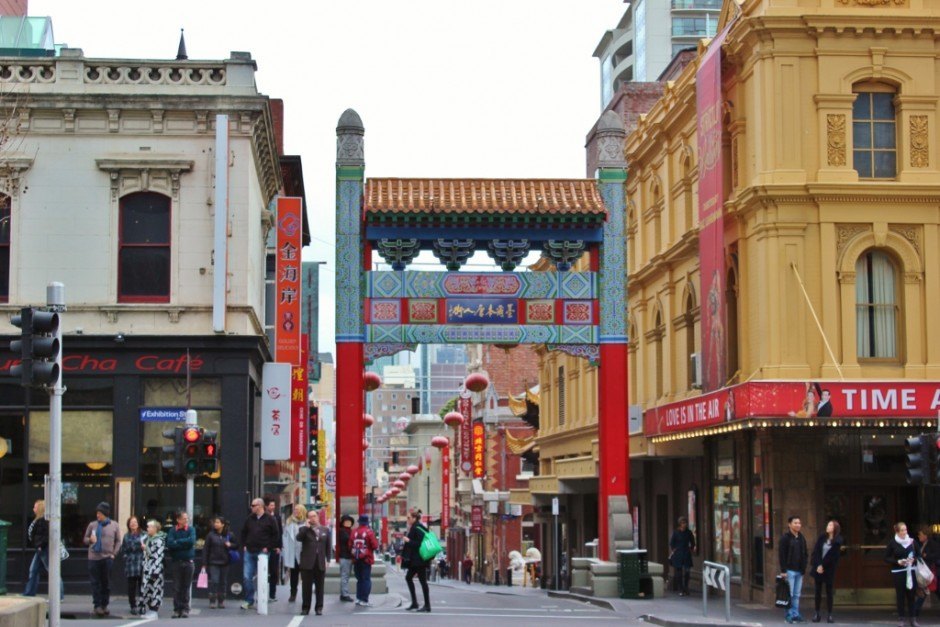 Marked by ornately painted gates and hanging lanterns, walk the length of Chinatown. Like so many foreigners, the Chinese were also drawn to Melbourne in the 1850’s by the prospect of finding gold. Land was purchased by many Chinese people along Little Bourke and the thriving Chinatown remains today with a bevy of Asian restaurants and shops.

Continue west to Swanston Street and head south to… 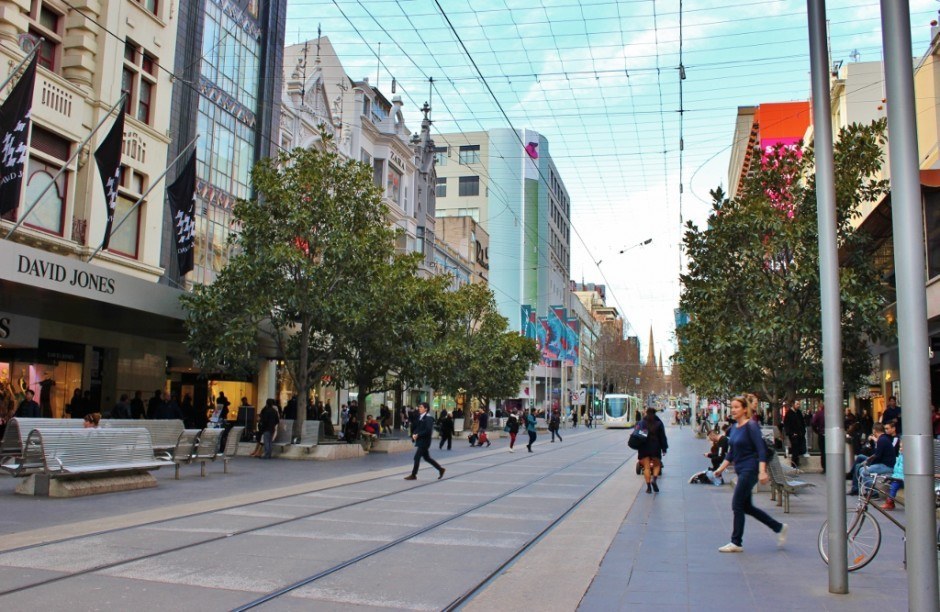 The Bourke Street Mall retail mecca includes everything from high end shops (hello Tiffany’s) to the necessities (Target) to the Myer Emporium, the flagship store of the Australian department store chain. With wide sidewalks, there is plenty of room for street performers to entertain those less interested in shopping.

Continue west, peeking down Union Lane for a glimipse at the city’s fabulous street art along the way, and head south into… 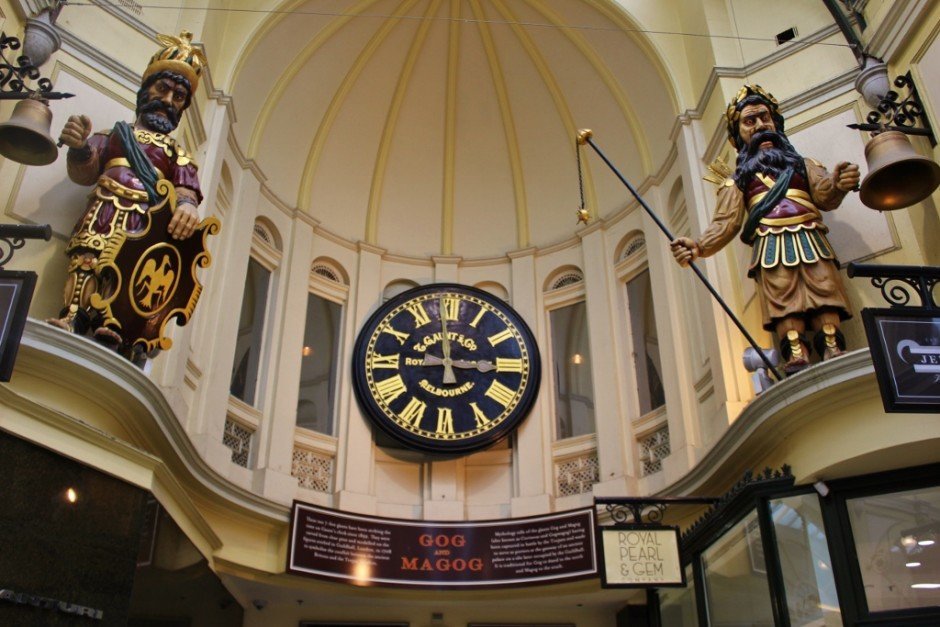 Royal Arcade is a quaint shopping street that has been around since 1869 and is filled with top end stores. Don’t miss the statues of Gog and Magog, two mythical creatures guarding Gaunt’s Clock since 1892 above the entrance.

Emerging onto Little Collins, zig zag east and then south into… 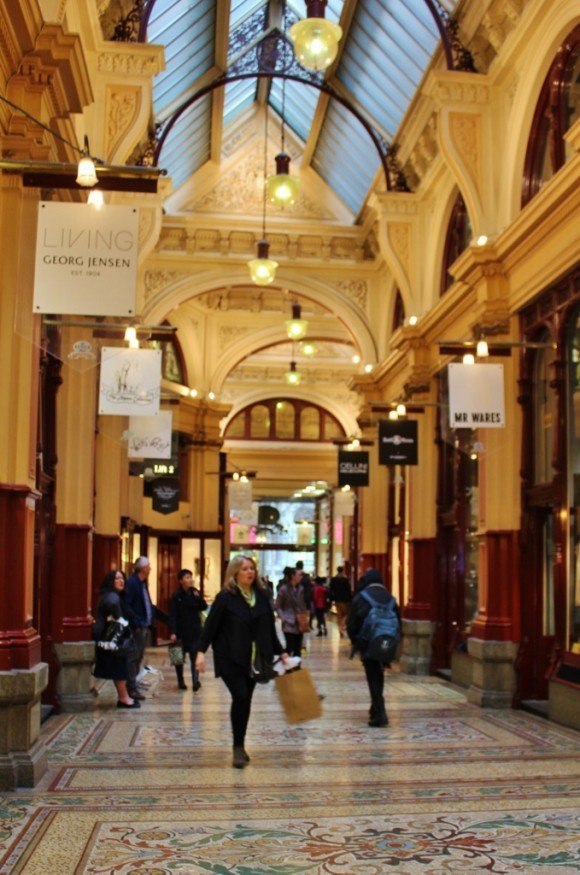 Perhaps even more opulent than Royal Arcade, Block Arcade, or just ‘The Block’, was once the place to be seen in Melbourne. The Italian tile, hand laid floor and the Hopetoun Tea Room help The Block retain a classy air.

Click here to read about the Laneways in Melbourne: alleys, arcades and street art

At Collins Street, go east to Swanston to the… 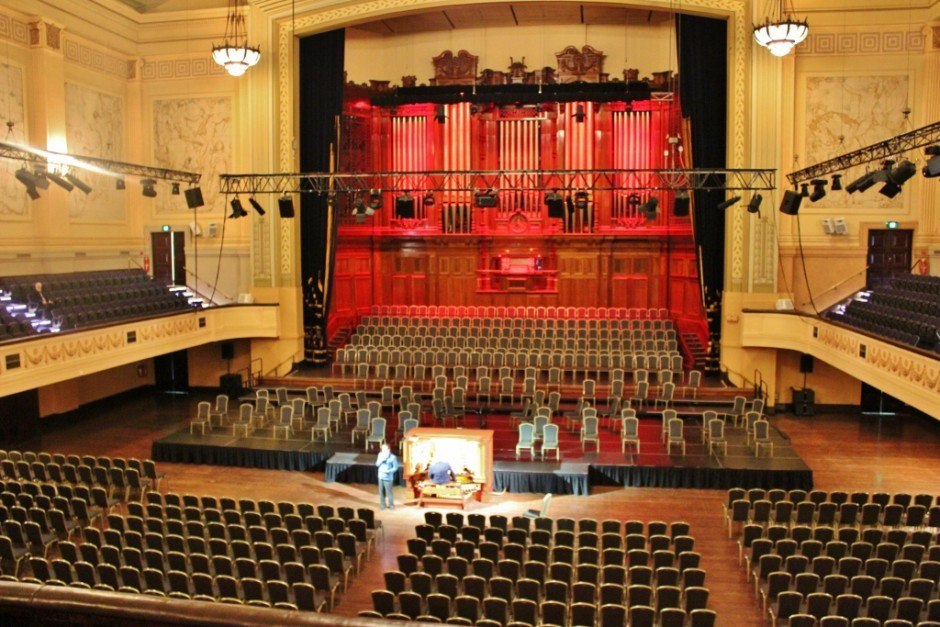 Completed in 1870, the Melbourne Town Hall is where city council members still meet, but also includes an auditorium and an astounding organ.

Continue east on Collins Street, passing the Scots’ Church and turning south on Russell Street. Go south to Flinders Lane. Rock and roll enthusiasts might want to detour east to AC/DC Lane for street art and a pop into Cherry Bar. Otherwise, go west to… 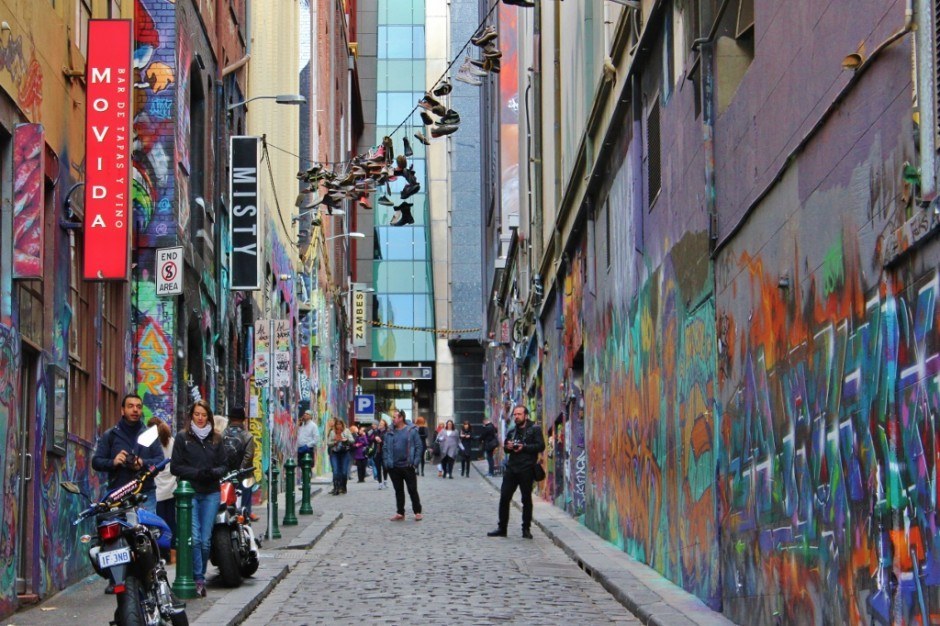 One of the best known laneways for amazing street art, get a good, up-close look at the art on the walls. It isn’t graffiti, which is illegal in Melbourne. The works on this street are commissioned and it’s likely you’ll see someone working on a spray paint masterpiece when you walk through.

At Flinders Street, head west to… 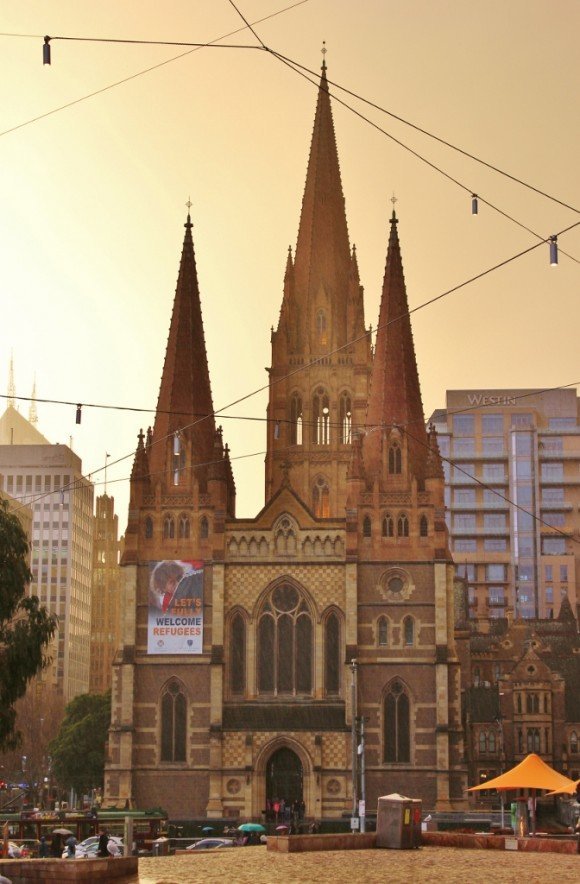 The first stone of St. Paul’s Cathedral, a gothic-style church, was laid in 1880, but the spires weren’t completed until 1933. The gorgeous interior includes original baptismal fonts and an 1891 organ.

Just south of the Cathedral is… 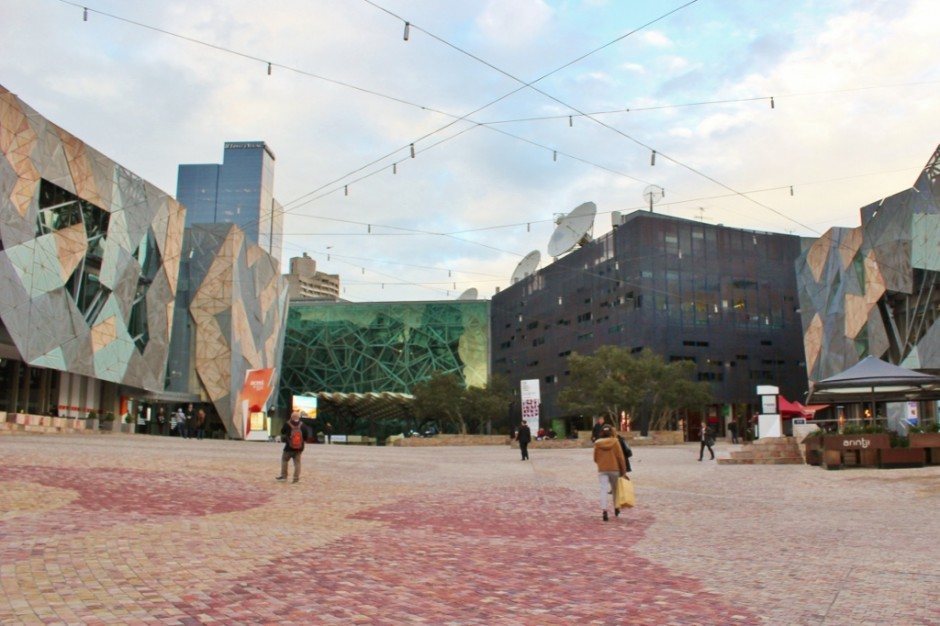 Federation Square, a public space that offers galleries, restaurants, bars and a place to sit back and relax, was opened in 2002. But, there is a much longer history of this location, tracing back to Aboriginals. The unique architecture is meant to bring different parts together as a whole.

Just west of Federation Square is… 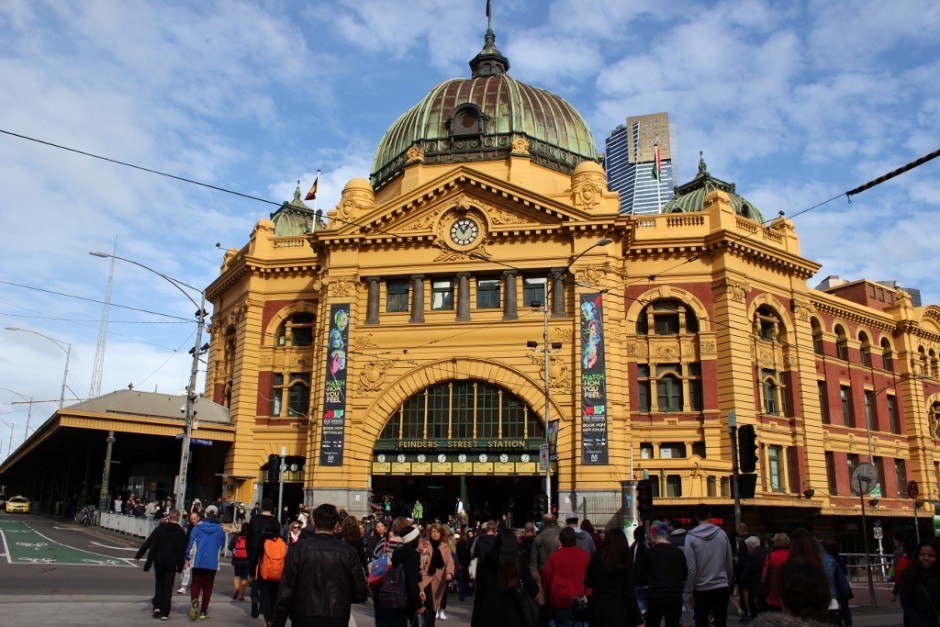 Flinders Street Station has long been one of the busiest stations in Melbourne. The corner entrance displays a row of clocks showing the next train departure on each line. In 1983, the clocks were removed and replaced by digital readings. The public was so upset by the change that they brought back the old clocks in one day’s time. If you hear someone say, “Meet you under the clocks,” this is where you will find them.

Head south on Swanston Street, crossing Princes Bridge. On the bridge, to the east, you can see the… 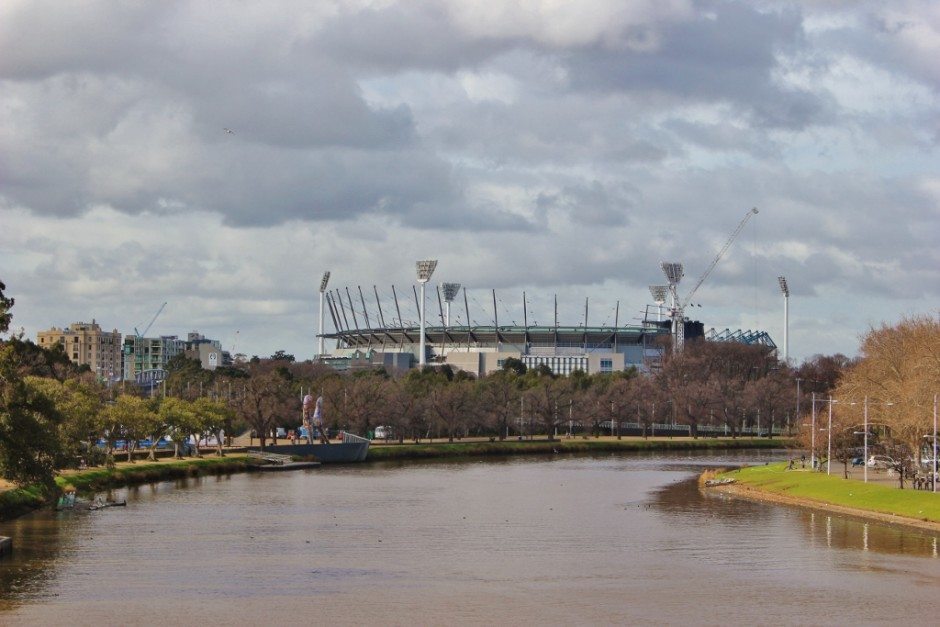 Better known as the MCG or The G, the 100,000 seat sports stadium was built in 1853 and is the biggest in all of Australia. It is used for Melbourne’s popular game, Australian Football, but also for cricket matches, concerts and the 1956 Olympics.

Finish crossing the bridge. From here, those that fancy a bit of nature may want to detour south to the Royal Botanical Gardens. War history buffs will want to head south to the Shrine of Remembrance. Otherwise, continue west along the river to… 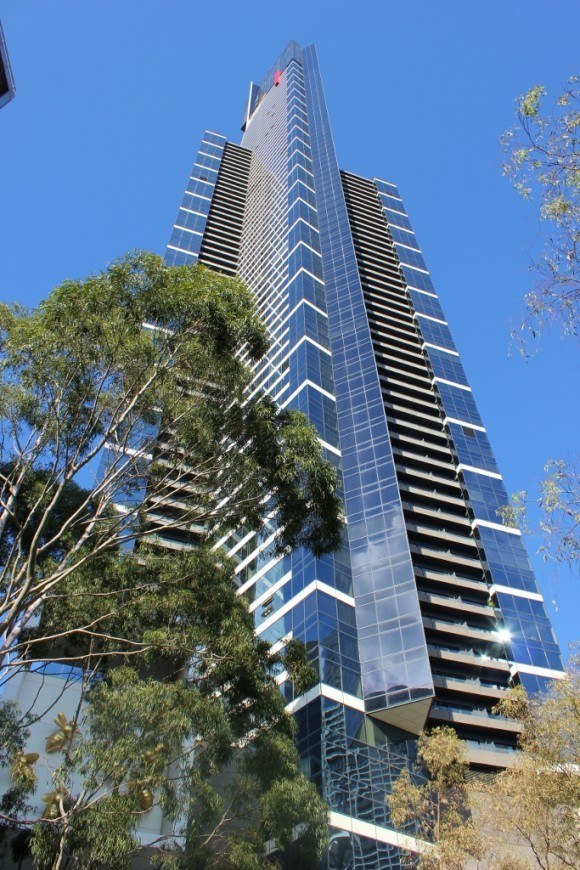 Standing at the base of the Eureka Tower, look up at the 975 foot building. At 92 stories, it reigns as the world’s tallest residential building and visitors are invited to take in the view from the 88th floor. The top 10 levels are golden in appearance because the glass is gold. The 24 carat gold plated windows are a nod to Melbourne’s historic gold rush of the 1850s. 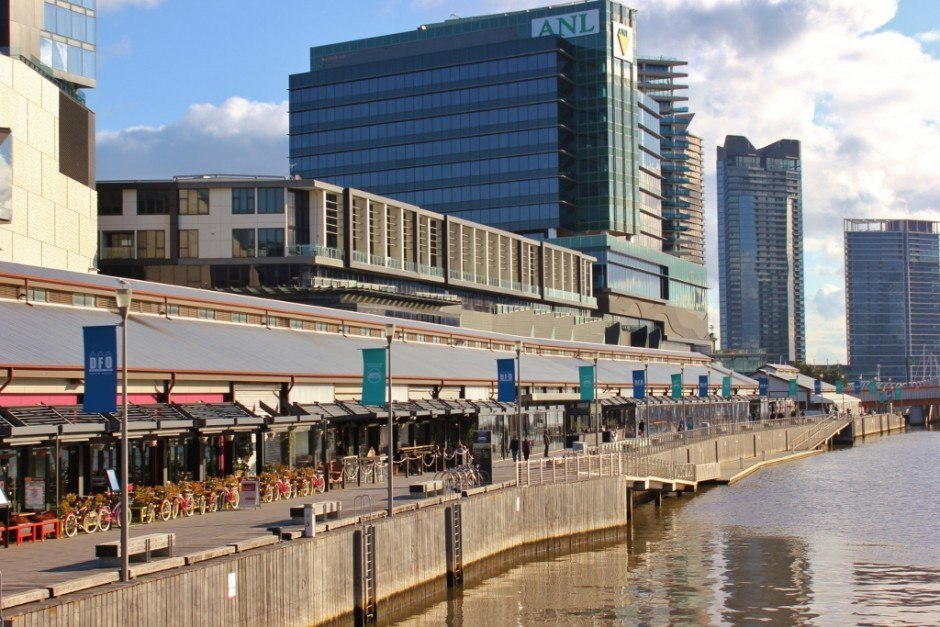 The South Wharf Promenade is a modern stretch of restaurants, anchored by the convention center and a shopping mall. A number of riverside bars invite you to have a meal or a drink with a view. 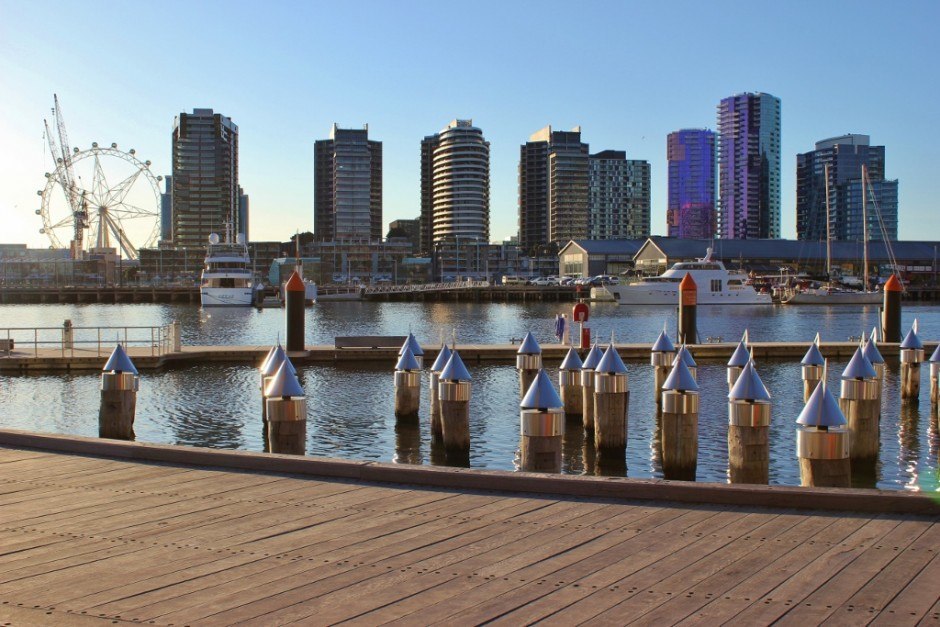 In the 1850s, the Victoria Harbor (then called Victoria Dock) was the main port in Melbourne, accepting both immigrants and shipments. The harbor continued to be in use until the 1960s when it was deemed too small for cargo ships. The recent revitalization project has renamed the area Docklands and has breathed new life into the area, including a beautiful promenade and waterfront restaurants.

From here, give your feet a much needed rest and catch a free City Circle Tram in either direction to your next destination. 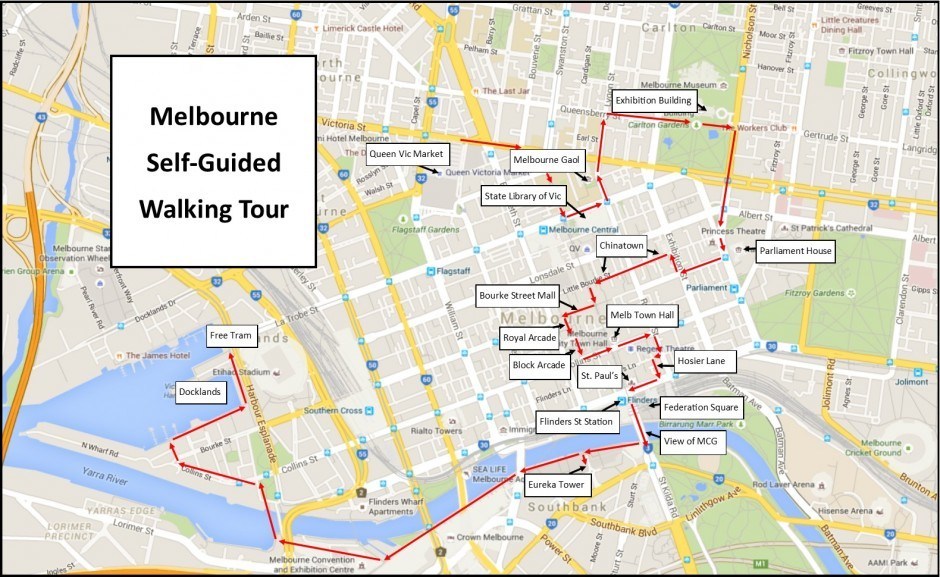 Tips for your self-guided walking tour of Melbourne: 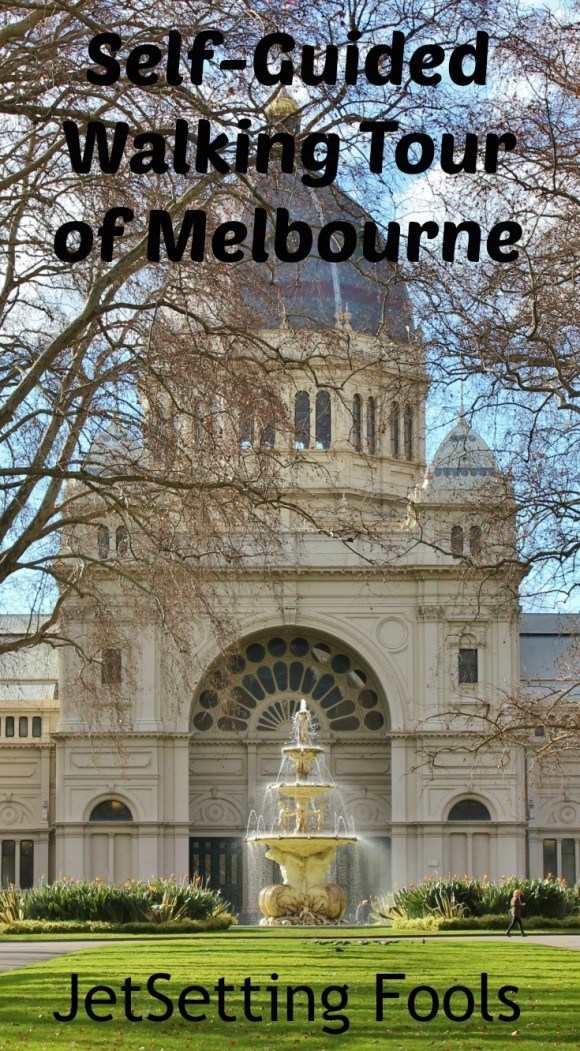