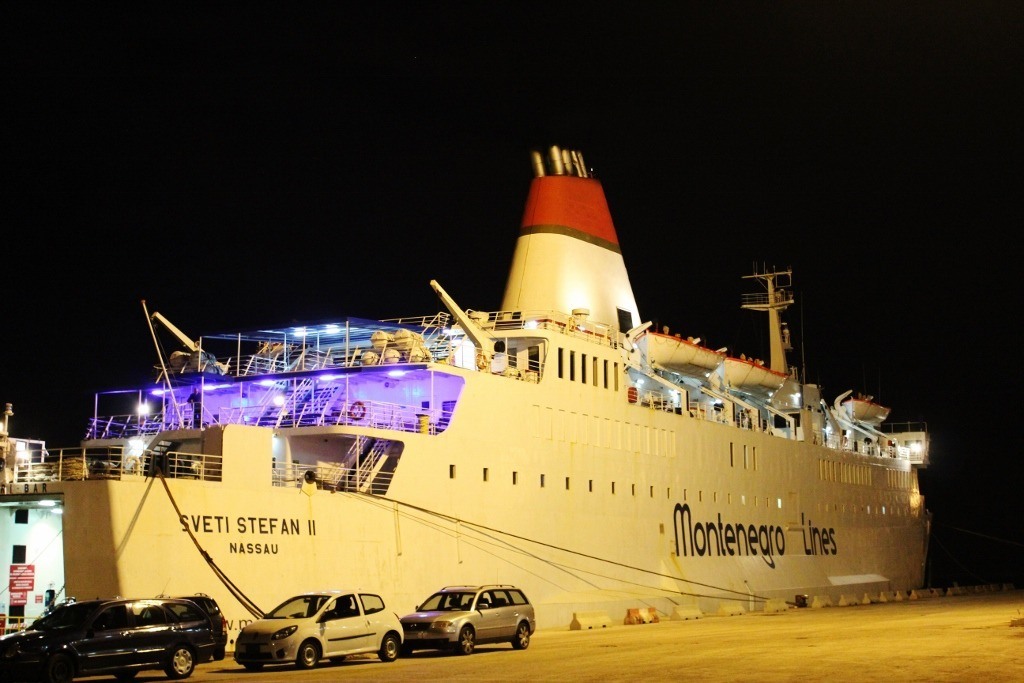 It’s no secret that flying is our preferred method of travel, we are Jetsetting Fools, after all.. Even in Southeast Asia – land of Travel-by-Bus – we relied on planes to get us from city to city. Every once in a while, however, we choose a different route – as was the case when it came to crossing the Adriatic Sea.

After our month-long stay in Lecce, Italy, we wanted to explore the western coast of the Balkans along the Adriatic Sea – and we chose Kotor, Montenegro as our first stop. Getting there by plane, especially in the off-season, was proving to be difficult. One itinerary could be: train from Lecce to Brindisi, fly to Rome (going the wrong way!), fly to Zagreb, Croatia, fly to Dubrovnik and, finally, a bus to Kotor. We did find a flight from Rome to Podgorica, Montenegro, but not within our budget, and would still require backtracking to Rome and a 3 hour bus ride to Kotor. Plan C provided the most direct route: Crossing the Adriatic Sea via ferry from Bari, Italy to Bar, Montenegro.

Simple enough, right? The Montenegro Lines ship cross the sea twice a week on an overnight, nine-hour journey. Single bed rooms with private bath are available for €80 and a second passenger can shack up in the room and squeeze onto the twin-size bed for an additional €44. We thought that was a pretty good deal for one night’s lodging and transportation. It seemed to be a solid plan…except that the February schedule wasn’t yet posted and it was already near the end of January.

Through a series of emails we learned that the ferry may not operate in February because “the boat will probably go on shipyard for some weeks.” To me, that sounds like the boat needs some maintenance. With the news of recent ferry incidents I became torn: I really wanted our plan to work, but at the same time, did I want to spend nine hours in the middle of the Adriatic Sea on a boat that required repairs? I somehow convinced myself that they wouldn’t run a broken ferry – and when the February schedule finally came out, we booked it.

We made the mistake of reading reviews after we booked the tickets and a feeling of dread blanketed the impending trip. I imagined soiled sheets, dirty toilets and loud, all-night drunkards roaming the hallways. And, in a final unsettling twist, we received an email the day before our departure letting us know the boat would be leaving an hour earlier than scheduled. My anxiety level was heightened as my mind raced with an amazing series of “we should haves.”

Even though it was the most efficient route we found, the process still wasn’t direct. We needed to take a train from Lecce to Bari, walk through the old town to the ferry terminal, hitch a ride to the ticket counter – then back to the ferry terminal – then board the boat. While we thought it would be a little hectic, it actually was quite a smooth process.

The train, where we had the car almost completely to ourselves, was one of the nicest we’ve been on and the panoramic windows provided a stellar view of the setting sun. The walk through Bari took us past high-end retail shops, filled with evening shoppers and others just strolling about. In the Bari Old Town – still a walled city with gated entrances – we wound through the narrow alleys and explored the two main churches, both so different from the architecture of Lecce’s Baroque style churches.

Once we found the Bari ferry terminal, we were told to wait for the shuttle bus to take us a couple miles away to the ticket office. Why there isn’t a ticket office inside the terminal seemed ludicrous to me, but no one else seemed to be bothered by the inefficient process. With passports stamped and boarding passes in hand, we made our way through customs, onto the boat and into our room.

We were delightfully surprised to find a decent size room, freshly washed and pressed sheets on a comfortable bed and a clean bathroom with a shower and provided toiletries. The restaurant was nicely decorated (possibly a bit overly decorated) and the wait staff wore white, long-sleeve shirts and bow-ties. It was far from a Carnival cruise, but we were starting to relax and our dire thoughts were shifting to images of a good night’s sleep.

The boat was open to wander, so we braved the chilly air and made our way from the stern to the bow, watching as cars and semis were loaded into the bowels of the boat. Just before departure, as smoke was blowing from the stacks and men in bright neon vests were preparing to unleash the lines from the dock, a few people started investigating the hull of the boat with a flashlight. The longer they looked, the more my nerves stood on end and my bright mood was starting to dim. But suddenly, the man in charge started hollering, the lines were untied and we were off into the black night on the Adriatic Sea. We watched as we left Bari, Italy in the distance and screamed, “Ciao Italia!” into the crisp air and to no one in particular until we could no longer see the city lights.

In an effort to get as much sleep as possible, we headed straight to the room and settled in. With the hum of the engine and the steady rocking of the sea, I was lulled into sleep in no time. Unfortunately, it didn’t last long as the steady rocking became more dramatic and we could feel the ship pitching and lurching in the swells. I peered out the window, expecting to see nothing but darkness, but was alarmed to see more white caps than black sea. As the waves crashed against the boat, the spray shot so high into the sky that it was beyond my view. Unsure of whether it was normal or something to be concerned about, we lay in bed with our eyes wide open and our minds alert.

Just as we were about to fall back to sleep, the boat would again plunge and tilt – more than once sending our backpacks skidding across the room and the items we’d placed on the shelf crashing to the floor. We could hear the sounds of other passengers getting seasick and the only way we could keep from doing so ourselves was to lie flat on our backs and sway with the motion. If I could have been sure that we weren’t going to capsize, I think I could have actually enjoyed it. The sensation was similar to a ride at an amusement park, but this ride was powered by the force of nature and was lasting well beyond the standard five minutes.

Hours had passed when the constant jarring movements started to ease. The sun was rising and I could see land outside the window. Land! We made it! Just as I felt I could finally fall asleep, we were jolted out of bed by the sharp knocking on the door letting us know it was time to check out.

We both worried that our legs would reject solid ground, but found that if we just kept moving, we could at least walk. At lunch, even after being on land for six hours, I swore I was going to fall off the chair and literally held onto the table to keep myself upright. It would be 36 hours until the swaying would stop.

We’ve since learned that high southerly ‘Yugo’ winds cause havoc on the Adriatic and was most likely the reason for the early departure. We were probably never in any serious danger, just in for a miserable ride. All the same, I think we’ll stick to flying…

Montenegro Lines no longer operates the route, or at all! However, the Croatian ferry company Jadrolinija operates a ferry from Bari to Dubrovnik, Croatia. The summer 2021 sailing schedule is available here.

Looking for what to do once you arrive? Have a look at all our travel guides to Croatia and Montenegro!

We want to know: Is there a method of travel you hesitate to (or won’t) take because of a bad experience?

11 thoughts on “Crossing The Adriatic Sea: Italy To Montenegro”