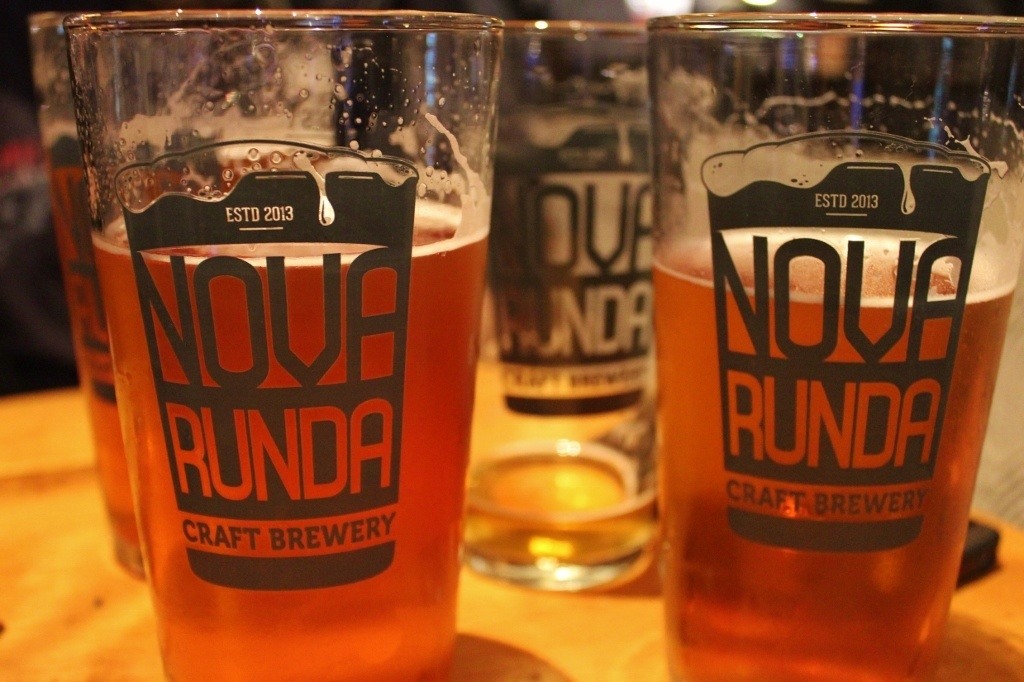 We’re going to let you in on a not-so-little secret: We like beer. And, we love craft beer. And right now, Nova Runda craft brew from Zagreb, Croatia is pretty high on our list.

During our first year of travel, we tried a hefty number of craft brews around the world. We’ve been fortunate to stumble on a couple of cities where the craft brew revolution is in full swing, like in Bariloche, Argentina, Wellington, New Zealand and Cape Town, South Africa. In Vietnam, it’s hard to be too critical of 25 cent “fresh beer” made daily. Arriving in Europe we found plenty of ‘new to us’ beers, but in reality they are the equivalent of America’s big brewers, like Budweiser, Coors and Miller. And, then we got to Zagreb, Croatia, home of Nova Runda Craft Brewery.

Being in a capital city means more international restaurants. I had been lugging around a craving for a burger for about month when we found Rocket Burger, an American-style diner. I was drooling as I ordered a bacon burger – and I about fell off my stool when I saw they had a local craft American Pale Ale by Nova Runda on tap. With a hoppy aroma and smooth finish, my taste buds were re-awakened.

With a little digging around on the internet, I was brought up to speed on the budding brewery. Six years in the making, their passion for better beer is evident, as is their intent to start a true craft brew revolution in Croatia. As I read their story of pursuing their dreams, I couldn’t help but relate and I was intrigued enough to ask for a meet-up with one of the founders, Miro…over a pint of their brew, of course.

The two friends, Miro and Marko, got into the brewing scene in 2009 after a trip to the Czech Republic where they tried more flavorful and complex beers. When they got back to Croatia, they started home brewing and created tasty beers – including a Peanut Butter Porter that won silver at the International Croatian Home Brewing Competition. Miro explained the intense process of how he extracted oil from peanuts for flavor. No joke, this guy is serious about his beer.

They started production under Nova Runda Craft Brewery (which translates to Another/New Round) in 2013, after a long process full of red tape and paperwork. They successfully ran a crowdfunding campaign on Indiegogo to raise money and rented space from another brewer. Just in the past two weeks, they started brewing in their own space and now have the capacity to expand.

Marko works as the Brew Master and Miro left his full-time corporate job to run everything else – from accounting to marketing to even delivering the barrels to the pubs. In addition, he makes great effort to educate people about craft brew and even started a weekly Twitter Chat on the subject. His passion and energy were so genuine we could feel it.

They are intent on producing authentic craft beer with quality ingredients and are inspired by American brewers like Sierra Nevada and Stone Brewing. Their curiosity and creativity far surpass conventional Croatian brewing methods and they are keen on bringing new beers to the market. Currently, Miro’s favorite beer are Black IPAs, which he hopes to be brewing soon.

As we ordered ‘another round’ we took a look at the other patrons at Legend Rider’s Caffe – one of the several pubs in Zagreb serving Marko & Miro’s ale. We noticed that anyone who wasn’t drinking coffee was drinking Nova Runda and we think it is pretty clear that these guys are on the cusp of something big.

Something big indeed, as the craft beer revolution is in full force in Croatia, lead still by the boys at Nova Runda. With an ever expanding line-up of craft beer, including several small-batch offerings, Marko and Miro have also enlisted additional staff to keep up with demand. In 2019, they moved into their new brewery in Zabok, just outside Zagreb. Another enhancement brought online in 2019 was canning and labeling machines, improving distribution. Craft Beer Festivals are now common throughout Croatia; from Osijek to Dubrovnik, Split to Sibenik, Zadar to Zagreb. Come on feel the hops, Croatian style. Zivjeli (Cheers)!

We want to know: Have you tried Nova Runda Craft Beer? Do you have a favorite craft beer? Tell us in the comments!