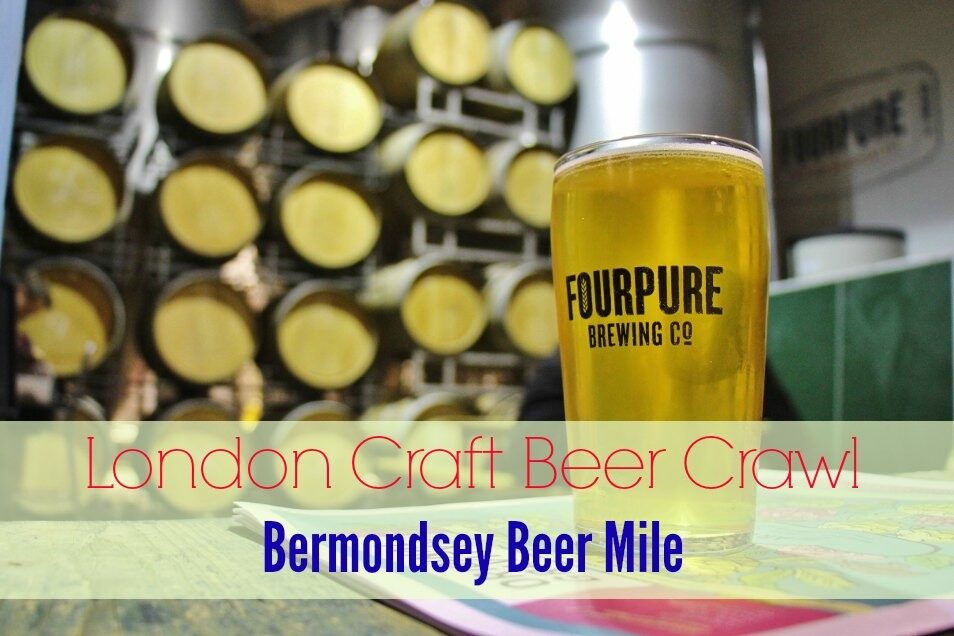 Bermondsey Beer Mile in London is everything that we love about craft beer! It’s local, creative, unpretentious and the beer is absolutely delicious.

Unlike the classic and cozy pubs in London that serve tepid real ales, the Bermondsey Beer Mile is offering an alternative beer scene. The small batch Bermondsey breweries, which are often informal and industrial, create a range of modern and inventive beers. And, the Bermondsey brewmasters open their doors for thirsty customers to sample what they are currently brewing.

Determined to get a good taste of the burgeoning scene, we joined the hipsters and beer lovers for a self-guided London Craft Beer Crawl on the Bermondsey Beer Mile.

What Is The Bermondsey Beer Mile?

The Bermondsey Beer Mile – actually, nearly 2 miles long today – refers to the numerous (18 as of 2023) Bermondsey breweries or bars that have popped up along a stretch of elevated train tracks in southeast London.

As early as 2009, UK craft brewers started moving into the area to take up residence in the brick railway arches below the tracks. The industrial spaces are bathed in stark light, littered with beer-making supplies and emit the strong aroma of fresh hops, wheat and barley.

The area is now home to several UK breweries, who open their doors to the public for craft beer consumption. Some of the Bermondsey bars limit their tasting room opening times to just a few hours on weekends; others are open every day of the week. With the various hours and walking distance between breweries, planning a London Craft Beer Crawl takes a little coordination…but it is well worth it for a taste of fresh brewed UK beers!

The Bermondsey London Breweries list is ever changing – breweries open, breweries close, opening hours change and some move to new locations all together. Furthermore, not all of the Beer Mile Bermondsey craft beer bars brew on site; some are just tasting rooms. That said, all of the London beer bars included in our list are dedicated to UK craft beer.

Our list of Bermondsey bars dedicated to craft beer (and collectively known as the Bermondsey Beer Mile) are the 16 places we’ve actually visited.

For each of these pubs in Bermondsey, we provide a map link to the establishment and offer a small bit of information. The bars are listed from west to east along the Bermondsey Mile. Below, we include a Bermondsey Map of all the craft beer bar locations and more tips on how to plan a London Craft Beer Crawl.

MAP. Brewing on site, Southwark has a tasting room that is open 5 days a week (closed Monday and Wednesday). They offer 7 cask beers alongside 4 keg brews.

MAP. The Barrel Project is a taproom and conditioning space for the London Beer Factory. Located in the Bermondsey arches and decorated with 200 oak barrels, they have 24 taps and feature beers from breweries around the world. (Closed Monday and Tuesday).

MAP. Located near the Maltby Street Market, Hivers Beers and Taproom creates a unique beer with local honey as a main ingredient. Hours are limited to just the weekends.

MAP. The Anspach & Hobday Brewery has nine beers on tap (try the London Black Porter!) and offers bottles for take away, too. While they moved their brewing production to Croydon in 2020, the Arch House at Bermondsey remains open Wednesday through Sunday, and patrons are permitted to bring in food from the Maltby Street Food Market.

MAP. Brewed in Bristol since 2007, Moor Beer Company opened a taproom under the Bermondsey arches in 2017 to showcase their range of brews. They also have guest taps and host loads of fun events, too. (Open Weds-Sat).

MAP. Founded in Manchester in 2014, their London taproom at Bermondsey is open Thursday through Sunday. They offer a large range of their own beer on draft – as well as guest taps!

MAP. Brew By Numbers is an absolute Bermondsey Beer Mile success story! So much so, they’ve moved their actually brewing to Greenwich, but the BBNo Bermondsey Taproom remains and is open Wednesday through Sunday.

MAP. Established in 2016, Bianca Road Brew Co brews and serves their hoppy West Coast beers from their 83-84 Enid Street location. They open their doors for tastings five days a week.

MAP. At Mash Paddle you can not only taste amazing craft beer, but you can brew some on the Bermondsey Beer Mile as well! This fun concept is accompanied by robust opening hours; from 12 noon daily!

MAP. The Kernel, the original Bermondsey Beer Mile brewer, was at one time so popular that they had to close their taproom and turn it into a take-away bottle shop that was only open for a few hours on Saturdays. Now, however, they have opened a proper taproom near their original brewery location, which is open five days a week (closed Mon-Tues).

MAP. Known for having a ‘cozy’ taproom and an upstairs perch, Affinity Brew Co offers 6 beers on tap. They have a line of creative beers and are open on Friday evenings and on Saturdays and Sundays. UPDATE: Affinity Brew is no longer located at Bermondsey.

MAP. Proudly using British hops in all their beers, Spartan remains one of the few Bermondsey Breweries with extremely  limited hours – only opening their taproom doors on Saturdays from 1pm until 8pm.

MAP. Even though they are a beer distributor and not a brewery, EeBria is a fun stop on the Bermondsey Beer Mile (but only on Saturdays). Featuring eight rotating taps along with throwback games and a huge range of beers and ciders available in bottles and cans, you can even get a cocktail here (if you need a beer break!).

MAP. Established in 2012, Partizan has been brewing in the same location since the beginning. Their taproom is open on Friday from 5-10pm (summer only) and Saturdays from noon to 8pm and features eight of their own brews on draft, alongside guests taps, spirits, wine and even mead!

MAP. Fourpure opened their brewery in 2013, upgraded their production in 2017 (and again in 2021!) along with expanding to an enormous taproom in 2019. They now offer 43 beers on tap, an array of food vendors and brewery tours, as well! Alas, they are still only open Thursday through Sunday.

Going on a London Craft Beer Crawl is one of the top Bermondsey things to do! Trying to make it to all of the bars on the Bermondsey Brewery Mile in one day, however, is quite ambitious. Although it is not impossible, we would recommend opting for half-pints. Revelers who want to attempt a one-day all-in Bermondsey Beer Mile tour can do it…but only on Saturdays when all the taprooms and bars are open.

Each of the Bermondsey bars sets their own hours – and they are widely varied and change often. All of the taprooms are open at some point on Saturdays and most are open on Sundays, too. During the weekdays, many bars are only open for a few hours in the evening, which is important to bear in mind when trying to plan a Bermondsey weekday bar crawl.

Also keep in mind that Saturdays are – by far – the busiest day on the Bermondsey Beer Mile…and some places get absolutely packed. To avoid large crowds, arrive early or return on another day when crowds are lighter.

For first-timers (or if you’re just short on time) we recommend choosing 5 or 6 breweries to include in a Bermondsey beer tour. Your Bermondsey route can go in either direction – either east to west or west to east, and public transport information is below with nearby stations and lines.

Visitors can stick to their list, but we suggest allowing a little room in your Beer Mile plan to deviate. Along the route you’ll likely find other craft beer bars that pique your interest as you pass by!

We recommend visiting at least these five original Bermondsey taprooms on your London Craft Beer Crawl. We list the route and essential information for each stop on our Bermondsey brewery tour below. We also include a Bar Crawl on the Bermondsey Mile Map and transportation information at the end of the article. Cheers!

Good beer attracts good crowds, which explains why Brew by Numbers was chockablock when we arrived in the early afternoon. We visited the original taproom (which was only open on Saturdays, but the new taproom at 75 Enid Street is open several days a week). The jolly revelers spilled out onto the patio, where a street food shop was grilling sausages for sale.

Have you really visited the Bermondsey Beer Mile if you haven’t been to the OG? The address is Arch 11, but it’s really located in Arch 7.

Not a brewer, but a local craft beer distributor, EeBria pours a variety of micro-brews on a rotating tap. Empty kegs and crate pallets serve as tables and chairs – and an air hockey table provides entertainment.

At Partizan Brewery, patrons imbibe amongst giant steel tanks in the small standing-room-only space. With a sole focus on making good craft beer, the industrial space seemed to invite a dedicated beer-aficionado crowd rather than partygoers.

We visited Fourpure Brewing when the taproom was still housed inside the warehouse brewery. In their new space, they have nearly doubled the number of taps (to an astounding 43) and host events, like trivia night, too. Long dedicated to service and consumer’s beer drinking experience, we can only imagine that the new taproom is top notch.

Getting To The Bermondsey Beer Mile London

It should go without saying that driving to a London Craft Beer Crawl is a terrible idea…especially in London where there are heaps of options for public transport and UBER drivers or a FreeNow Taxi always nearby.

London Bridge – Southern, Thameslink, Southeastern lines (at the west end of the mile).

South Bermondsey – Southern Line (at the east end of the mile).

This interactive map features all of the craft beer bars on the Bermondsey Beer Mile. Use this link to Google Maps for an online version of the map.

Use this link to Google Maps for our recommend London bar crawl route! Note: UBREW has closed.

Looking for a classic London pub crawl or what to eat in London? Great! Check out our guides for all the Famous London Food and the Best Pubs on the Thames!

Start planning your trip to London! Search for the lowest airfares, the best accommodations and fun things to do…then start packing!  Want more travel planning tips? Head over to our Travel Planning page for more information and tips on traveling – and for country-specific information, take a look at our Travel Guides page!

Looking for more helpful tips for planning your trip? Use our detailed 3-Day London Itinerary!

We want to know: Have you done a London Craft Beer Crawl on the Bermondsey Beer Mile? Which taprooms were your favorite? Tell us in the comments!