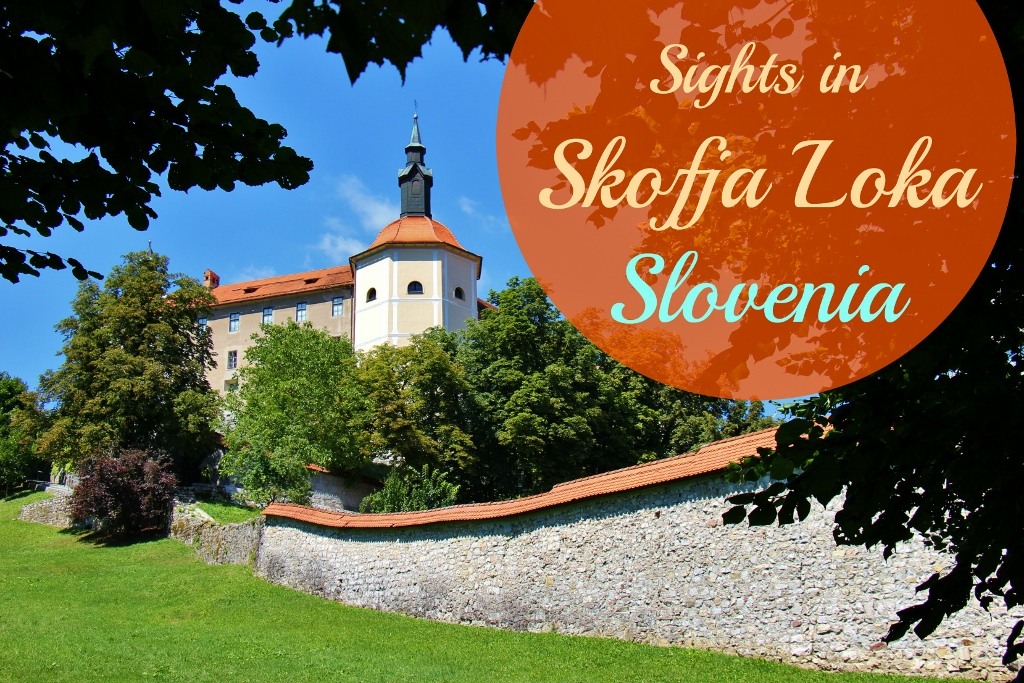 Dating back to the year 973, Skofja Loka, Slovenia was built on the confluence of two rivers – Poljanska Sora and Selska Sora. The city center consists of the upper town square, Plac, and the lower town square, Lontrg, both of which are situated under the hill-topping castle, The Castle of Skofja Loka. From the 14th century until the late 18th century, the town was protected by walls, portions of which are still standing. Though earthquakes, fire and war have marked the city, Skofja Loka remains one of the best preserved medieval towns in Slovenia. Located just 23 km northwest of Slovenia’s capital, Ljubljana, we took a day trip to get a firsthand look at the sights in Skofja Loka. 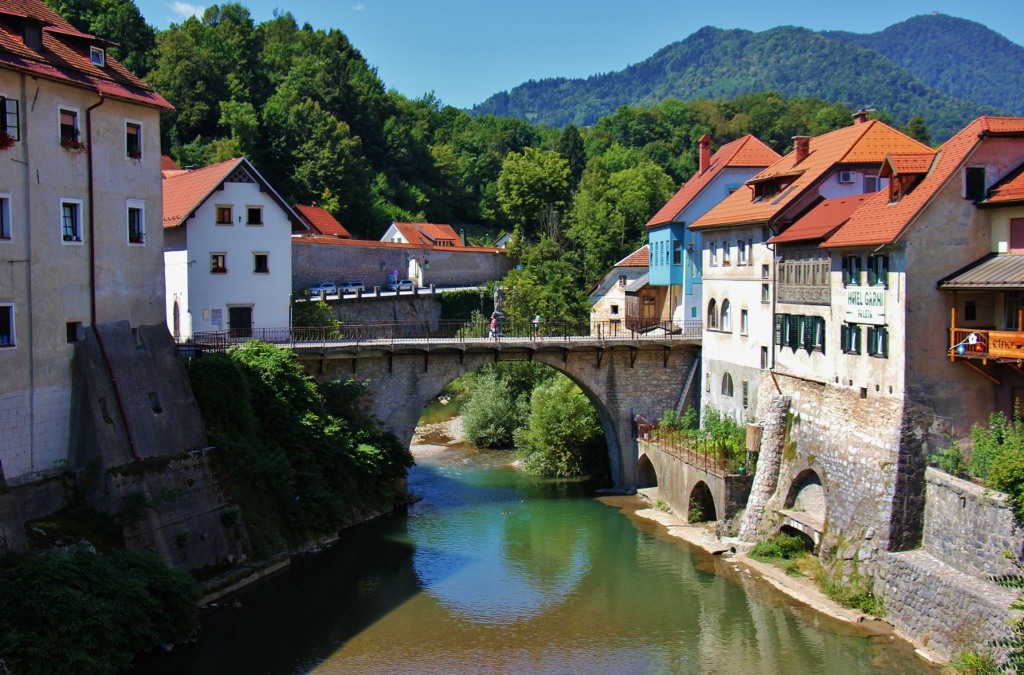 From the bus stop, we crossed the bridge into Cankarjev trg and continued straight into the main square, Mestni trg. We picked up a very useful map from the Tourist Information Center and then found a seat at the The Homan House Café to get our bearings. Over a cup of bela kava (white coffee, similar to a latte), we planned our route to see the sights of Skofja Loka.

Little did we know, the café we were sitting in, The Homan House, is one of the historic buildings on Mestni trg. Built as a civil manor house, The Homan House was restored in 1529 after the big 1511 earthquake, which destroyed much of Skofja Loka.

Other notable buildings on Mestni trg include the Old Parson’s House, the residence of a wealthy townsman; the Zigon House, a residential and trade house now used by the local government; and the Old Town Hall. The Old Town Hall, which served as a meeting place for the local government, was built in the 16th century. In 1972, the building underwent restoration, at which time original frescoes and other details were discovered. When a fire damaged the building in 2014, it was restored to look as it once did, including frescoes and the small bell tower.

Shop for all your travel gear online with Amazon! 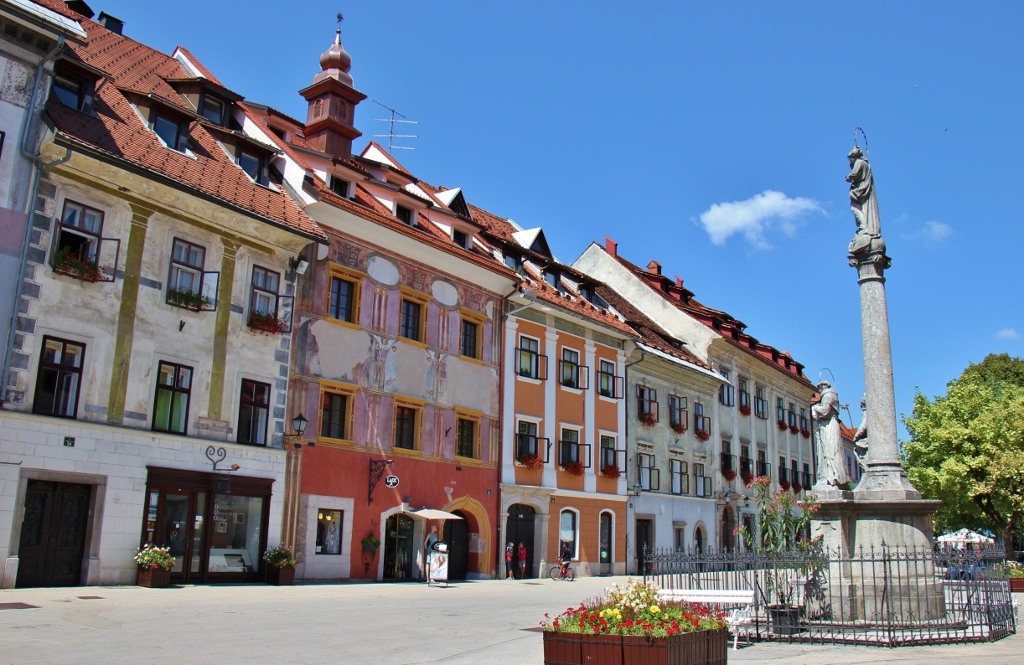 Two other things to see on the main square are the Mark of Mary and the stone fountain. The Mark of Mary, the three columns and altar that face the Old Town Hall, were erected to give thanks for protecting Skofja Loka from the plague and fire. The statues date to 1751. The stone fountain, which is directly in front of the Tourist Information Office, was built in 1883. It’s still in use…for those who can figure out how to turn it on. (I’ll let you in on the secret: use the palm of your hand to rub the wall below the faucet.)

Continuing south through Mestni trg, we turned right at the Martin House, one of the historic homes remaining from the origins of Skofja Loka. The house was built as part of the town walls, a length of which still stands. Following the path, we walked up to the Castle of Skofja Loka. Parts of the castle, like the original tower (which no longer stands) were built as early as the 13th century, with additions of residential quarters being added in the 14th century. The castle suffered major damage during the 1511 earthquake and has been renovated several times since. The castle now houses the Museum of Skofja Loka. A path through the castle grounds (opposite the parking lot) passes a historic mill house, a garden, a barn and an outdoor theater. 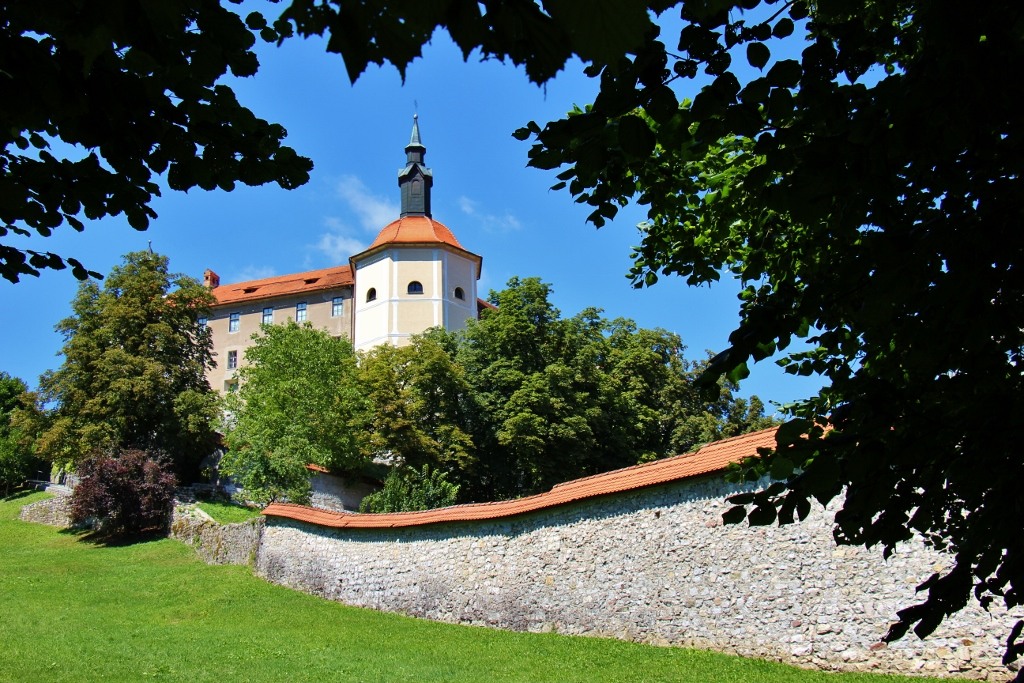 From the arched entrance to the castle, we took the path leading up to Krancelj Hill where the Upper Tower once stood. Built in the 12th century and used as a lookout tower, only remains of the foundation are visible today.

We made our way back to the castle, but rather than retracing our steps into town, we turned left on the path below the castle until we got to Klobovsova, where we turned left…and then left again at The Church of Mary Immaculate. The church, also known as the Nun’s Church, was built in 1358, but was remodeled to the current design in 1669. Unfortunately, the church was closed during our visit, so we missed the interior.

Always open, however, is the small chapel built into the staircase below the main entrance to the church, which was decorated with lit candles and colorful lanterns. With our backs to the chapel, we walked straight onto Blazeva. We resisted the urge to stop at Bar Lunca and instead headed to the arched passageway, The Selca Town Gate, which was once the most important of the five city entrances. We passed through the gate onto Capuchin Bridge, a 600-year-old stone bridge. In 1888, the statue of St. John of Nepomuk, which bears the seal of Skofja Loka, was added to the bridge, along with the iron rails. 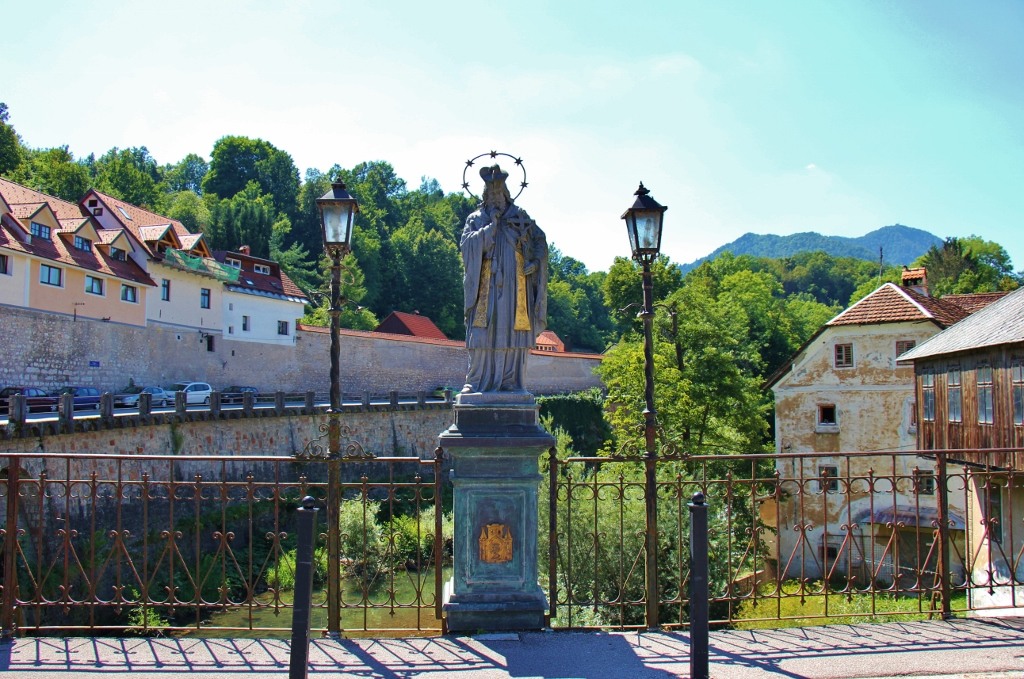 Crossing over the bridge, we walked to the Capuchin Church and Library. The church, built in 1709, is fairly plain, but has interesting altars. Although we were unable to locate the library – or the collection of books that date prior to the year 1501 – we did find bathrooms. (A great find on any walking tour!)

We re-entered the old town through the Selca Town Gate (the same way we left), this time making a stop at Bar Lunca for a glass of their homemade beer. (A highly recommended stop!) From the Bar Lunca patio, we turned left down the alley to Cankarjev trg. 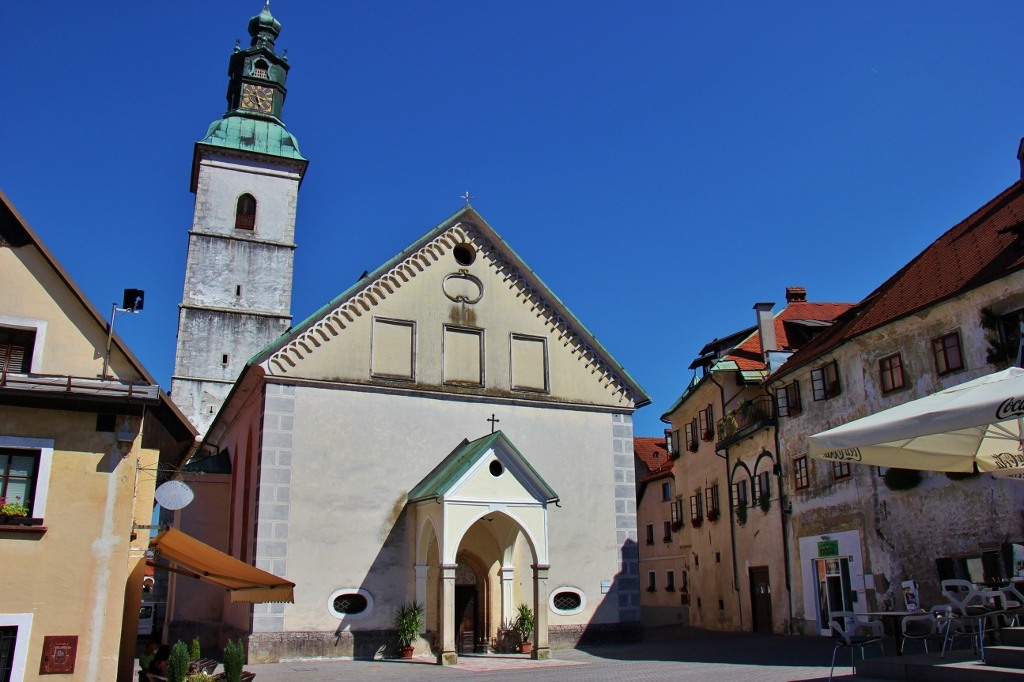 The small square is dominated by the Church of St. Jacob, also called the Parish Church. The church was built in the 13th century, but has endured several expansions, reconstructions and remodels since then. The current interior is attributed to Joze Plecnik, the Slovene architect who designed much of Slovenia’s capital city, Ljubljana. Leaving the church and walking along the right side, we passed by the old school house, which dates to 1538.

We continued down the sloping sidewalk to Spondnji trg. Across the street to the left we found The Granary, a stone building which was once part of the town walls. It was in this building that taxes – in the form of grains – were collected and stored.

Walking south on Spodnji trg (opposite direction of the river), we passed the row of colorful houses before reaching the Church of Spital. Built in 1710, the church was built as part of the town’s former poorhouse. Unfortunately, this church was also closed during our visit. 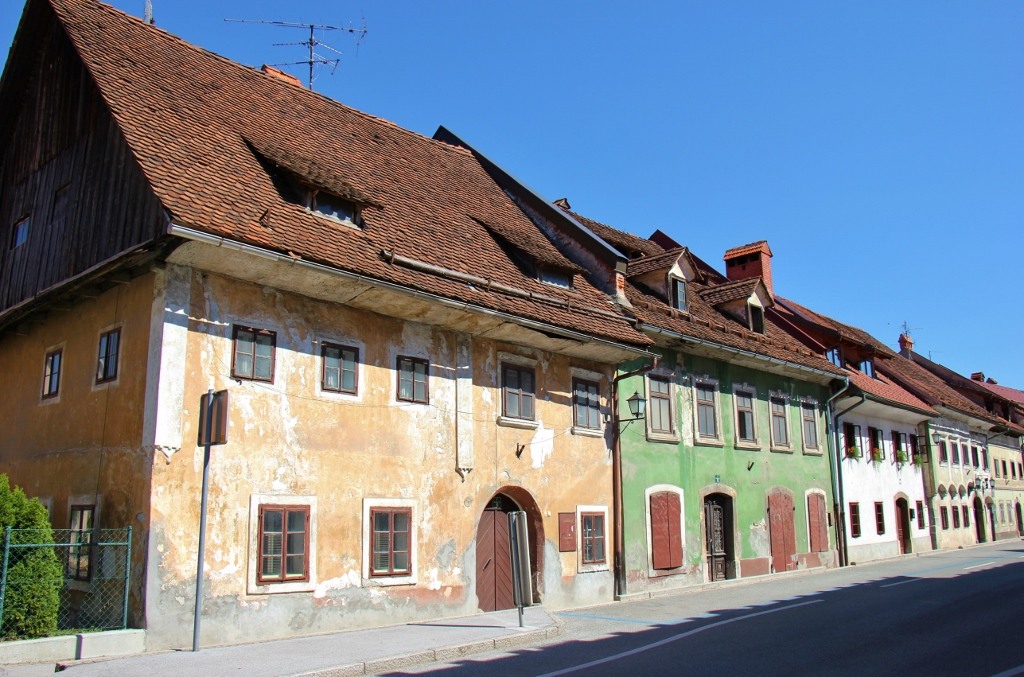 Turning left down the street just past the church, we made our way to the confluence of the two rivers and walked onto the footbridge that crosses where the rivers merge. From the bridge, we retraced our steps to the Church of Spital, crossed over Spodnji trg into the alley and up the curving staircase, which took us right back to Mestni trg.

After seeing the sights in Skofja Loka, we had a bit more time before catching our bus. Rather than just waiting at the bus stop, we opted for an early dinner on the outdoor patio of Jesharna, overlooking the river as the sun began to set behind Capuchin Bridge.

Click here for the route on Google Maps! Note: Google does not recognize the walking path from the Skofja Loka Castle to the Nun’s Church or the alley and stairs that connect Spodnji trg to Mestni trg. To follow our route exactly, use the directions in the post.

We want to know: Have you taken a day trip to see the sights in Skofja Loka, Slovenia? How did you explore the city? Tell us in the comments!

Need a place to stay in Skofja Loka? Search with Booking.com!


Pin it! See all of our travel pins on our JetSetting Fools Pinterest Board. 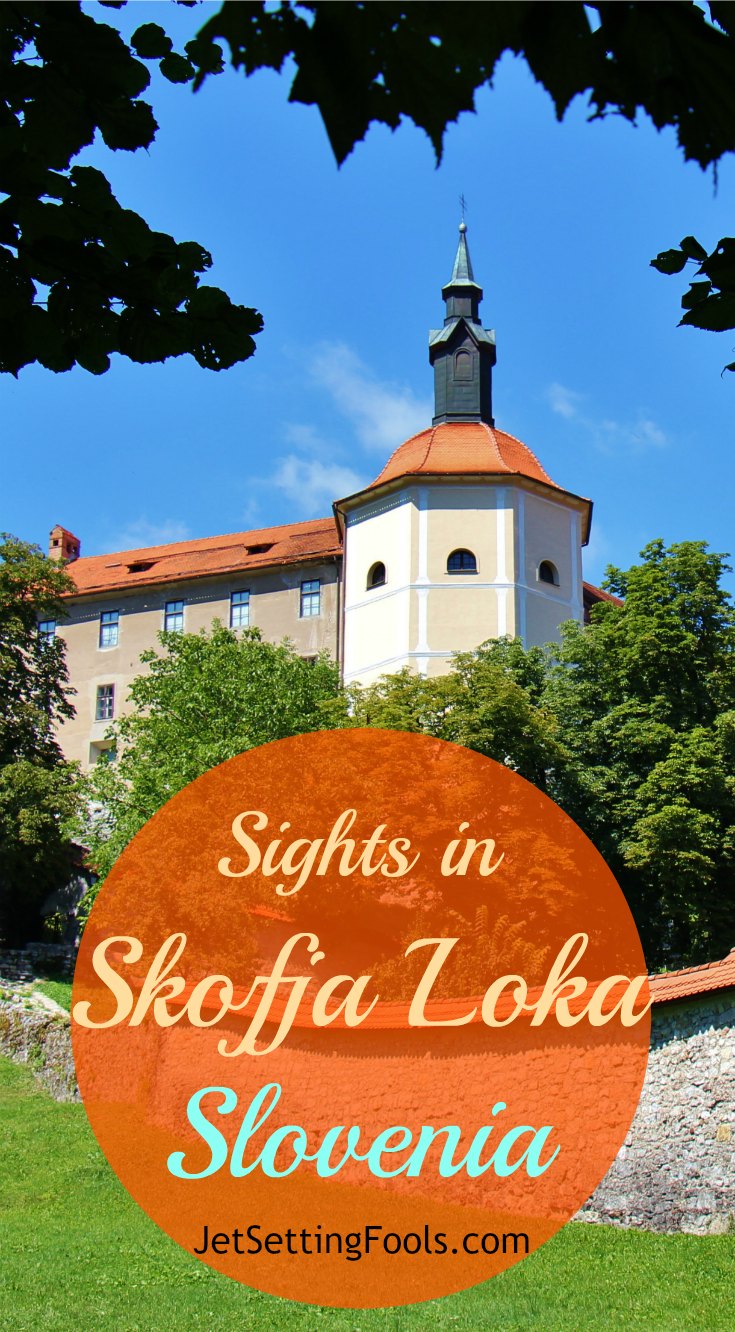 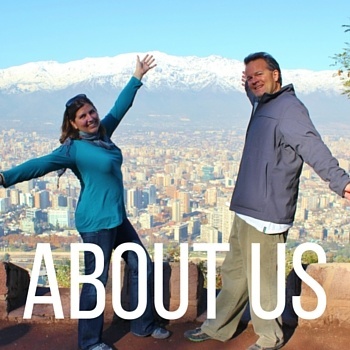