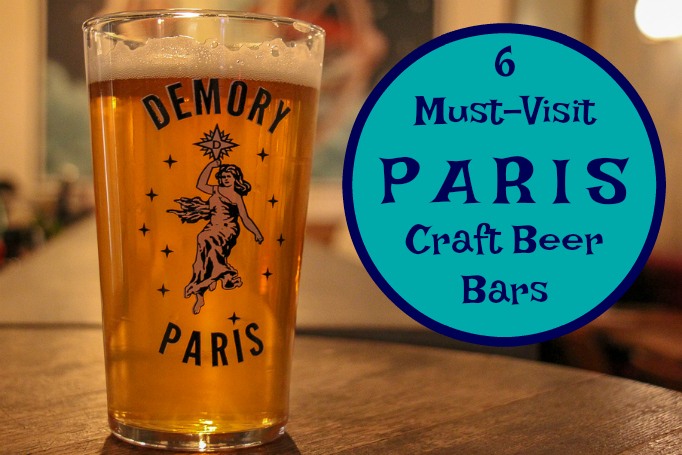 Skip the bubbly and put down the wine! There’s a new buzz in town…and it’s all about Paris Craft Beer. Not historically known for beer production, Paris microbreweries have started popping up throughout the city. During our month petsitting in Paris, we got a good taste of several small-batch French beers – and loved them! Read on for a list of our favorite pubs in Paris that are dedicated to serving French craft beer – and some international choices as well!

Where To Drink Craft Beer in Paris, France

Unlike other cities that quickly whipped into a craft beer frenzy (like Amsterdam!), the Paris craft beer scene has been slow to evolve. In the expansive and expensive city, small Paris brewery owners compete with the big French beer brands. If you go to a classic Paris pub or street corner café, the beer op-tap is most likely the popular French beer 1664, a mass-produced pale lager by Kronenbourg. That said, craft beer in France is gaining ground…and the best beer bars in Paris are serving it up!

Seeking out craft beer in Paris takes a little effort – but the endeavor is rewarded with tasty brews. Most of the craft beer bars in Paris feature locally brewed beers, but usually also offer foreign craft on tap – especially from the UK. (We recognized the beer from many London brewers we tasted along the Bermondsey Beer Mile).

We were intent on sampling the best beer in Paris – made in Paris. We tasted an array of French microbrewery beers, but couldn’t resist ordering a few seasonals from recognizable brands in Europe and America, too. We love seeing small-batch brewers work together and support each other – and we definitely got the feeling of a real craft beer community in Paris.

You can use our list as a Bar Guide to Paris. For each bar, we have included a link to the location and reviews on Google Maps. At the end of the post, there is a map of all our recommended Paris craft beer bars. Our list of craft beer bars in Paris are in alphabetical order. Make sure to check opening times; some bars are closed on Mondays and Tuesdays.

Save, Pin or Bookmark our Paris Craft Beer Guide for your trip to France!

Located near Republique Square, the Bon Esprit beer bar in Paris is a fun spot to pop into for a craft beer and tapas-style snacks. Pouring a range of local and international brews (including a seasonal from America’s Brooklyn Brewery when we visited), the friendly bar staff is helpful in providing descriptions of each beer. Inside the small corner bar, patrons can belly up to the bar, take a seat at a high-top table or play a game of foosball. Guests like us, who enjoy an early evening beer, can take advantage of happy hour prices from 5pm until 9pm. Map

#2 Frog Beer at The Frog and Underground

Frog Beer Paris is a well-established microbrewery – brewing since 1993 – with multiple brewpubs in Paris, as well as locations in Toulouse and Bordeaux. Each of their themed bars are as unique as their beers (which includes a Superhero Series and specials like Chipotle Chocolate Porter and Rhubarb White). The pubs, which open for lunch and remain open until late, offer standard pub fare and specialize in burgers. We indulged in a few pints of Winter Ale at the Frog & Underground 2nd Arrondissement location, which is spread over three floors. Map

If we had to pick just one Paris craft beer bar to go to, it would probably be Hoppy Corner. Opened in 2016, Hoppy Corner offers 15 beers on tap and a cozy, social atmosphere. Even when it is crowded (and it’s almost always crowded), the easy-going bartenders are patient and helpful. The rotating tap list features beers that hail from France and beyond – and include several of our favorite IPAs. There is no happy hour, but the good vibes paired with the stellar beer selection make Hoppy Corner one of the best beer bars in Paris. Map

The industrial, minimalistic space at I.B.U. allowed us to concentrate on the best aspect of the bar: the beer. The taproom offers 10 craft beers on draft – which are listed on a marquee-style lightbox – as well as a selection of bottled craft beer and cured meat and cheese snacks. Draft beer is served in 3 sizes – from small 12.5cl glasses (which are perfect for sampling unfamiliar beers) to half liters. Functioning as a bar and a cave a bieres (beer shop), I.B.U. sells 1- and 2-liter growlers that can be filled for take-away, which is perfect for when you find a beer that you love! Map

Looking for more things to do in Paris? Find our best tips and advice in our Paris Itineraries!

The stylish L’Intrepide Bar sits just steps from Moulin Rouge and is one of our favorite Montmartre bars. A tasting room for Demory Paris Brewery, L’Intrepide pours a range of Demory brews, as well as a selection from other local French brewers. The Demory Paris Brewery has a history that can be traced back to 1827 – and the revitalized brand launched in 2009 with the intention of making quality Parisian craft beer. In addition to L’Intrepide Craft Beer Bar, Demory has a second location (aptly named Bar Demory Paris) in Le Marais district near the Pompidou Center. Map

The best French beer we tried was at the Paname Paris bar, which is located in an old granary along Canal Saint-Martin. The open-concept bar has ample seating and a floating outdoor patio. This Paris brewery brews on-site, ensuring fresh craft beer is poured from the taps. Not only a brewery, the Paname restaurant offers a full menu of ‘high-end street food’ that pairs perfectly with their range of beers. In addition to their regular lineup of beers, they also create diverse seasonal specialties and reserve a few taps for craft beers from fellow brewers. Map

Use this link to Google Maps to find your way to our favorite Craft Beer Bars in Paris!

More About Craft Beer in Paris

We have a few more tips to aid in your quest of finding the best beer in France!

How to say Beer in French

First things first: Beer in French is Bière. Easy enough, right? When ordering a beer in Paris, let them know if you want a pint (une pinte) or half pint (un demi). If you are visiting one of our recommended Paris craft beer bars the staff will almost surely speak English, but still appreciate the effort of speaking at least a few words in French.

How Much is a Beer in Paris?

To be clear, drinking in Paris is not budget friendly …especially when drinking Paris craft beer. The price of beer in Paris starts at about €6 for a pint and increases with quality and ABV. We saw (but didn’t taste) some beers that cost as much as €14. Beer-lovers on a budget should look for happy hour specials. For cheap beer in Paris, head to the grocery store; Monoprix stocks some craft beer in bottles.

Paris Beer Week, which takes place in June, is the biggest Paris beer festival that features craft beer. You can find specific dates, events and information on their official website.

Would you rather a guide lead you to the best pubs in Paris to sample craft beer with a group of like-minded beer-drinkers? Join a guided Beer Tasting Paris tour that ventures into three craft beer pubs, includes a history of beer in Paris and snacks, too. Find out more!

We Want To Know: Do you have a favorite Paris craft beer bar or a specific Parisian craft beer to recommend? Give us your best tips and advice in the comments below!

Top Tips: If you have time, be sure to visit Strasbourg and Colmar for more great French craft beer as well! Looking for other European city craft beer guides? Have a look at our craft brew reviews for Porto, Prague, Split, Reykjavik, Lviv, Budapest and Belgrade!

Start planning your trip to Paris, France! Search for the lowest airfares, the best accommodations and fun things to do…then start packing!  Want more travel planning tips? Head over to our Travel Planning page for more information and tips on traveling – and for country-specific information, take a look at our Travel Guides page!