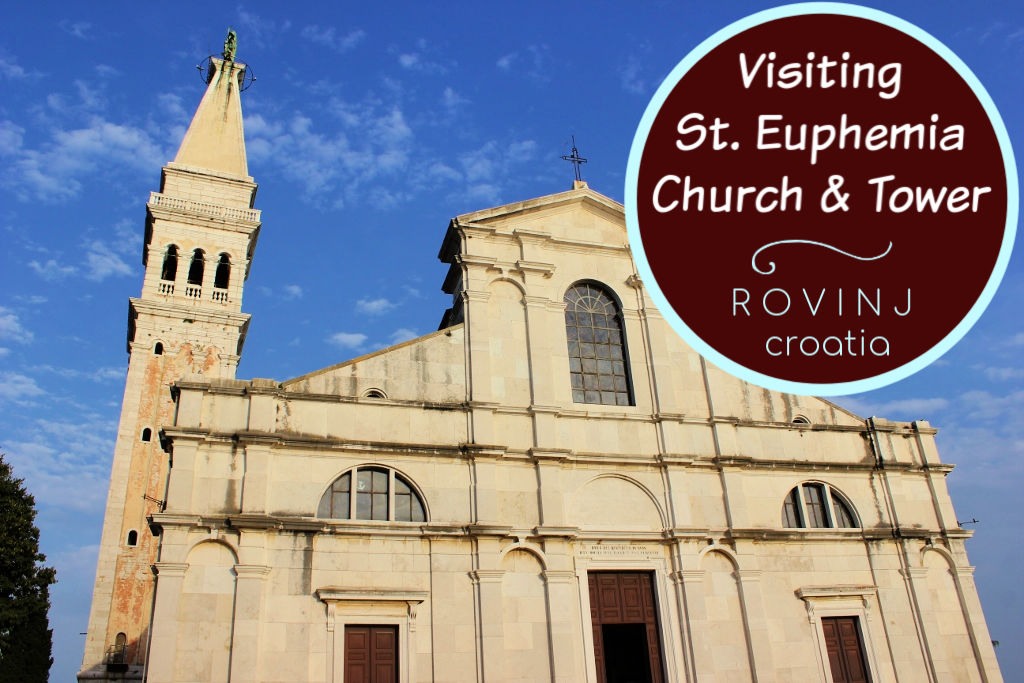 There is something so incredibly idyllic about Rovinj, Croatia. We’ve been completely smitten by the town, from the turquoise water lapping the rocky shore to the narrow, twisting lanes to the St. Euphemia Church and its bell tower that stretches into the sky. We are soaking it in – literally – by dipping into the sea every day and taking in the sweeping views from the highest point in town.

When we’re floating in the water, the view of the old town is as pretty as a painting and our eyes are naturally drawn to the church. Intrigued by the story of St. Euphemia’s relics that are housed inside (and by the views from the top of the bell tower), more than once we’ve wandered up the cobblestone streets that lead to the hilltop to visit the St. Euphemia Rovinj Church.

The church facade features arches and columns, but is rather unadorned from the outside. The interior, however, is lavishly decorated in the opulent Baroque style. In addition to statues and frescoes, the church houses several treasured 16th century paintings, including Last Supper. Our favorite painting, however, is the one that tells the fable of how St. Euphemia’s relics were miraculously transported to the hill-topping church.

There are many versions to the story of how St. Euphemia’s relics arrived in Rovinj. The most commonly told tale is that in the year 800, the tomb containing St. Euphemia was found floating in the sea. Fishermen pulled it ashore and the people of Rovinj instantly knew what it was, but they were physically unable to move the sarcophagus.

A young boy, claiming to have had a dream about St. Euphemia, said he could do it, which no one believed. However, the boy – along with his two cows – hauled the heavy marble tomb up the hill to the church – where it still resides. After witnessing the boy’s miraculous feat, St. Euphemia was named the patron saint and protector of Rovinj.

The church was later rebuilt (completed in 1736), and now includes an altar for St. Euphemia’s relics. For centuries, the faithful have made pilgrimages to see the tomb.

Built in the mid-1600s (before the current church), the Rovinj Bell Tower was designed in the same style as the tower at St. Mark’s Basilica in Venice, Italy. On top of the bell tower is a statue of St. Euphemia that acts as a weather vane and twists with the wind. Standing 60 meters tall atop the town’s highest hill, the bell tower provides incredible views.

The bell tower at St. Euphemia has 192 rickety steps that can be climbed for a small fee (which we considered a donation toward new steps.) Concentrating on foot placement is likely the most challenging part of the climb, but is well-rewarded with the scenery at the top.

With 360-degree panoramic views, it is possible to see neighboring coastal towns, small vineyards and tall mountains in the distance. Rovinj’s densely built old town looks even more compact from above. Faded orange tiled rooftops merge together making it impossible to see the lanes that weave through the buildings.

Out to sea, the view encompasses the many islands that dot the sea just off-shore and boats sailing around them. In the morning, light sparkles on the water near the harbor, making the boats appear to be floating on a bed of diamonds.

We want to know: Have you visited the St. Euphemia Church in Rovinj, Croatia? Did you climb the bell tower? Give us your tips and advice on the Best Things To Do In Rovinj, Croatia in the comments below!