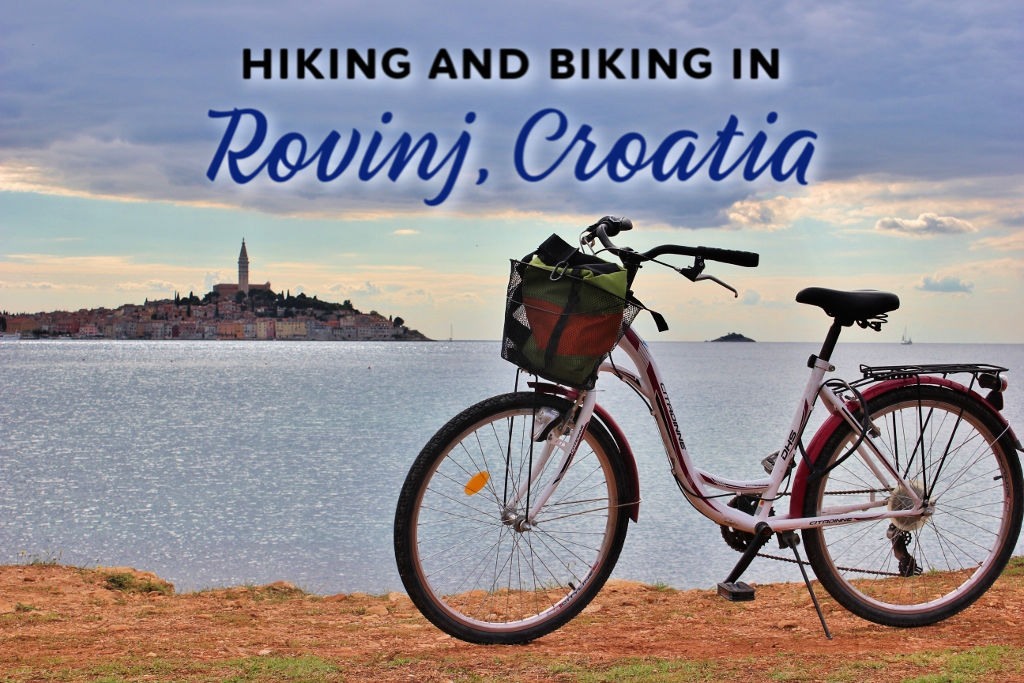 Rovinj, Croatia has a compact, densely built and completely charming Old Town…but it doesn’t have much green space. That said, nature isn’t far from the city center. In fact, there are several intertwining hiking and biking trails in Rovinj. Active travelers can lace up their hiking shoes or rent a bike in Rovinj to explore the regions gorgeous coastline and vine-covered countryside.

During our visit, one of our favorite things to do in Rovinj was discover the landscapes beyond the Old Town. To the south, the Golden Cape Forest Park offers a natural reprieve from the relatively busy city. To the north, the rural countryside features vineyards, olive groves an ancient churches. Both areas are well-connected with paths. We set off on foot and on Rovinj bike rentals to explore more than just the Old Town.

The Golden Cape Forest Park (Zlatni Rt) is located south of Old Town Rovinj. The forested park features both indigenous and foreign trees, a coastline of secluded coves and hiking and biking trails. The park is considered to be one of the most significant parks along Croatia’s coastline – and is a must-visit while in Rovinj.

How To Get To Golden Cape

To get to the park, we followed the coastline south of Rovinj around the harbor, past the marina and Hotel Park Maistra and found our way onto Trail 203. The trail, also called Vistrum, is suitable for bikers, walkers and joggers and follows the coastline around the park. The entire looping trail is more than 26km, but we only navigated the portion around Golden Cape Park.

What To See in Golden Cape Park

After we entered the park, we discovered that there are many hiking and biking trails through the forested area. We mostly stayed on Trail 203 around the coastline, but veered away once to climb a large hill in search of panoramic views. There is an old quarry at the top of the hill; its sheer cliff is popular with rock climbers.

Fun Fact: Much of the rock from the quarry was used to build the city of Venice.

On the descent, the path reconnected with the stunningly beautiful shoreline. We were captivated by the scenery around each corner; the teal water, off-shore islands and picturesque sailboats creating the perfect photo ops.

I couldn’t help but take ‘just one more’ photo and I was glad we were on foot, rather than renting bicycles to explore the park. Had we been on bikes, I would have been stopping every few minutes to take another picture.

We made it as far as the Golden Cove (Zlatna Uvala) and then decided to turn inland. Our route took us to a street in a neighborhood that was lined with holiday rental homes. We eventually made our way to the Hotel Eden. From the hotel, we popped back out on the coastline and headed back into town.

Top Tip: Wear a swim suit and go for a swim at Golden Cape Park! The water is incredibly inviting and we regretted not being prepared with swimming attire. In the summertime, there are cafes, too.

North of the Rovinj Old Town, the residential area quickly gives way to the spacious countryside. Wanting to explore as much as we could, we rented bikes and set off aon a two-wheeled adventure!

Using a Rovinj cycling map, we determined that we could easily complete the 10km loop on Trail 201. (The full route is 39km long, but consists of two loops; we only rode the small loop directly north of the Old Town.) We struggled in the beginning, unsure of where exactly we were on the map and unable to find any trail markers on the street, but we eventually found our way to the official trailhead. From there, we rode through gentle hills on both gravel and pavement. Our ride took us through vineyards and olive groves, past countryside konobas (restaurants) and farms. Trail 201 Info and Map.

The 201 Biking Path is part of the larger Basilica Track. On our route, we pedaled past two old churches: the ruins of St. Bartholomew’s Chapel and St. Christopher’s Church. Pilgrimages used to take place to all of the field churches to pray for crops. Basilica Track Info and Map.

On our approach back into town, we briefly connected on Trail 202 to complete our smaller loop. We could see all of Rovinj and the St. Euphemia Bell Tower, prettily perched out into the sea. We think is the most beautiful viewpoint of the city from afar. The density of the old town sits in contrast with the open nature and would be a perfect spot to catch one of the legendary Rovinj Sunsets!

Top Tips for the Hiking and Biking in Rovinj, Croatia

We want to know: Have you been on the hiking and biking trails in Rovinj, Croatia? Where did you go? Have any tips? Tell us about it in the comments!

2 thoughts on “Hiking and Biking Trails in Rovinj, Croatia”