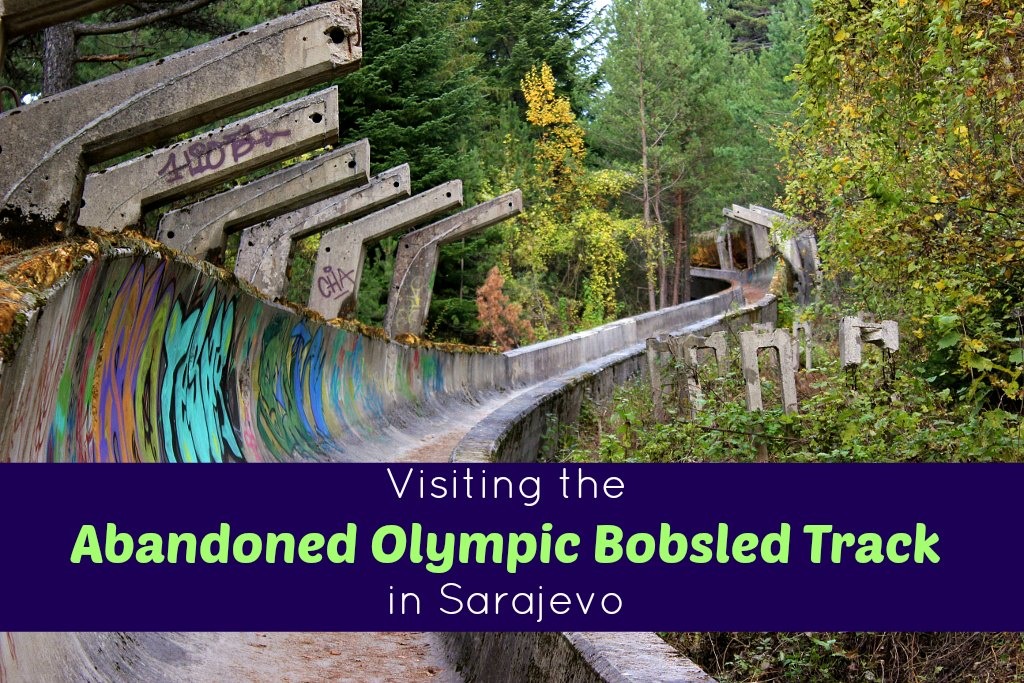 As we watched the third taxi drive away leaving us still standing on the curb, we started to wonder if an adventure to the abandoned Olympic bobsled track on the hillside of Trebevic Mountain was going to happen. The first driver said he didn’t know where it was. The second simply said no. The third told us he hasn’t gone there since the war. When we had read about visiting the remains of the 1984 Sarajevo Olympic bobsled track no one mentioned any difficulty in catching a cab.

Actually, the details about visiting the track were fairly vague. There are tour buses that make the trip, but none stay long enough to explore. Some people hike it, but most get lost and find it takes much longer and is much more strenuous than they anticipated. No sections of the track were labeled on Google Maps.

Yet, there was something extremely alluring about going to see the abandoned Olympic bobsled track in Sarajevo. It wasn’t directly related to the 1984 Winter Olympics; I was too young then to even remember it. It certainly had nothing to do with the sport of bobsledding itself. My only knowledge of Olympic bobsledding was learned from John Candy in Cool Runnings. Perhaps, it was that nearly 40 years after the event, the city of Sarajevo still proudly celebrates their designation as a one-time Olympic host city.

Throughout Sarajevo, the Olympic symbol still appears on sidewalks and buildings – often it’s the official marking, sometimes it is in the form of street art. In the old town Sarajevo, souvenir shops sell plush toys and sweatshirts of Vucko, the cartoon wolf Olympic Mascot.

Early on during our stay in Sarajevo, we ventured to the Olympic Stadium. A tower bearing the Olympic Rings guided our way. Renovations were underway at the dilapidated Zetra Ice Rink, which was used during the Sarajevo Olympics for speed skating events. A faded Vucko still stands watch from a billboard.

It wasn’t really seeing these sights, however, that prompted us to head to the hills above Sarajevo for a look at the abandoned Olympic bobsled track. Our fascination may have been fueled by the role it played in the Siege of Sarajevo. Bosnian Serb forces used the track and the surrounding area as their artillery position.

But, really, it was more than that. It was the story of Sarajevo in its entirety. It was an important history lesson. It was a story of the pinnacle of greatness, destructed by war and left for nature to reclaim. A process like this should occur over centuries, not decades. And, for us, it was fascinating that it had happened within our lifetime.

UPDATE: As of April 2018 there is now a Sarajevo Cable Car!

However, getting to the Sarajevo bobsled track was proving to be a more difficult task than we imagined. Our frustration was mounting. We were on the brink of chucking the idea all together when a fourth cab approached. At first the driver was hesitant. We were asking him to take us to different points of the Sarajevo track and allow us about an hour of time tramping around the area. He set his price at the top end of what we were willing to pay: 40 BAM, about $23 USD. We would have negotiated, but with three taxis passing us by, we thought it might be our only chance for a ride. We jumped in the car while he quickly removed his rooftop taxi sign and then headed south from the banks of the Miljacka River and up the slopes of Trebevic Mountain.

Our driver easily navigated the narrow, curving streets through the hillside neighborhoods of Sarajevo. He waved to people walking along the street. He stopped the car and put down his window to talk to men standing outside their homes and cutting wood near the curb. When cars would approach from the opposite direction, he would simply put his car in reverse and find a space wide enough for the other car to pass. This was his neighborhood, he told us, and he knew it well.

The car groaned as we ascended the steep and winding roads above Sarajevo. At times, I wondered if the car would make it. But, then my concern turned elsewhere. We kept going and going and I began to worry if the driver was taking us to the right place. My sideways looks at Kris were going unnoticed, so I looked out the window at the quickly changing landscape. The cluster of houses were left behind and we entered a wooded area. We passed a large building, well, at least what used to be a building. It was once a hotel, we learned. Now, it was nothing but crumbling walls surrounded by overgrown foliage.

As we zig-zagged up the side of Trebevic Mountain, we had vistas that stretched over this entire region Bosnia. I was astonished at how much elevation we had gained in such a short time. The city of Sarajevo was nestled in the hazy valley, tucked in like a baby in a cradle. The driver stopped, more than once, to let us get out and take photos.

Eventually, we came to a parking lot, but we bypassed it and turned down a rustic, one-lane path barely wide enough for the car. Branches scraped against the doors. When we encountered walkers, the driver slowed to a crawl and then stopped to let the people negotiate their way around the vehicle. Finally we came to a clearing and we pulled into it. “The beginning part of the track,” announced the driver as he pointed in the direction of a concrete slab surrounded by forest.

The structure looked sorely out of place and resembled nothing of Olympic grandeur. Amateur graffiti covered part of the bobsled track. Damp moss and broken glass covered the small stands. I stood at the edge and felt it impossible that Olympic athletes had stood in the exact same spot.

We walked toward the first downhill drop and when I peered over the edge, my imagination came to life. I pictured the track slick with ice, thick snow on the ground and crowds cheering in the stands. I felt a rush of adrenaline and the sensation of gaining speed down the track, hurtling toward the first turn. In reality, the structure was there, but the elements were missing.

Hesitant to get back in the car, the driver said there was more to see. He drove to a second clearing under a large section of curving track. We were surprised to find several families and couples milling about what we thought was an abandoned area. Kids posed by the track while their parents took pictures, a man pushed a stroller along part of the track and couples sat together smoking and talking on the edge of the concrete. Colorful graffiti graced the walls that looked less like tagging and more like street art.

When we left the area, we returned to isolation. The bobsled track turned away from the road and into the dense forest. The exposed concrete of the abandoned Sarajevo Olympic bobsled track among the trees was an odd sight. Further along, we met back up with the track. There were bullet holes in the side, left from the Yugoslav war and the siege of Sarajevo.

We made a few more stops before coming to the final two turns and the Sarajevo bobsled track finish line. We had the open field to ourselves, but imagined what it was like swarming with media crews and spectators. Remarkably, the bridge straddling the finish line still stands and, from the top of it, we had a bird’s eye view over the last portion of track. We simultaneously felt the excitement of the events that happened in the place we were standing and sorrow for how it has been left in ruins.

Click here for video footage from the 1984 Olympic bobsled competition to see it in its glory.

Visiting more of Sarajevo? Read all about the best Sarajevo Sights and amazing Sarajevo Cuisine

NEW IN SINCE 2018 – Sarajevo Cable Car!: Have you visited the abandoned Olympic bobsled track in Sarajevo on the new Cable Car? What were your impressions? Tell us in the comments!

Start planning your trip to Sarajevo! Search for the lowest airfares, the best accommodations and fun things to do…then start packing!  Want more travel planning tips? Head over to our Travel Planning page for more information and tips on traveling – and for country-specific information, take a look at our Travel Guides page!

Visiting Sarajevo and Mostar on your Bosnia-Herzegovina trip? Get our top tips for Mostar in our blog post: Things To Do in Mostar!