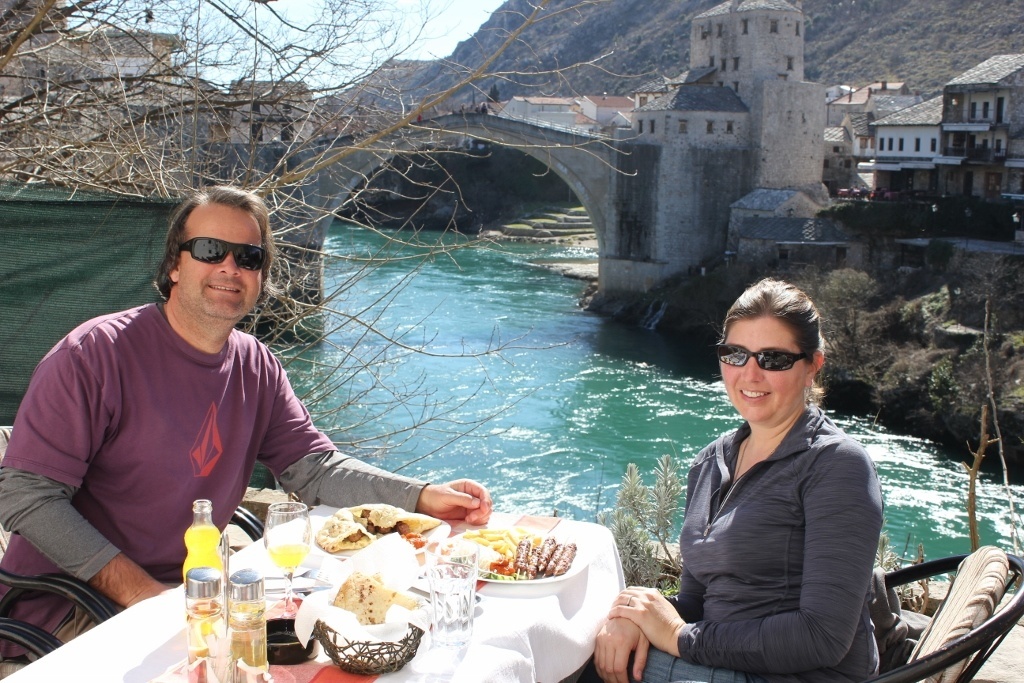 After 386 days of traveling around the world, we’re closing the books on this adventure. During our one year and three week journey, we budgeted $100 (on average) per day and kept track of every cent spent. We’ve tallied the cost of every bed we slept in, every meal we ate, every glass of wine we consumed, every bus we took and every admission fee we paid – and {dramatic pause} we came in well under budget, averaging just $89 a day! Below is a breakdown of our year-long, round the world budget, by category, with a brief recap of the last 110 days.

Round the World Budget: Lodging

As we’ve traveled, accommodations have been our biggest cost. However, the average amount we’ve spent in the past 110 days has dropped dramatically to just $35 per night. This can be attributed to two things: 1. Visiting Europe in the non-peak season and 2. Housesitting. We still had a few expensive stays, like Zurich, Switzerland ($112/night) and Dublin, Ireland ($88/night), but we also had some of our least expensive stays, like Mostar, Bosnia-Herzegovina ($26/night), Zagreb, Croatia ($30/night), Split, Croatia ($31/night) and Budapest, Hungary ($34/night). 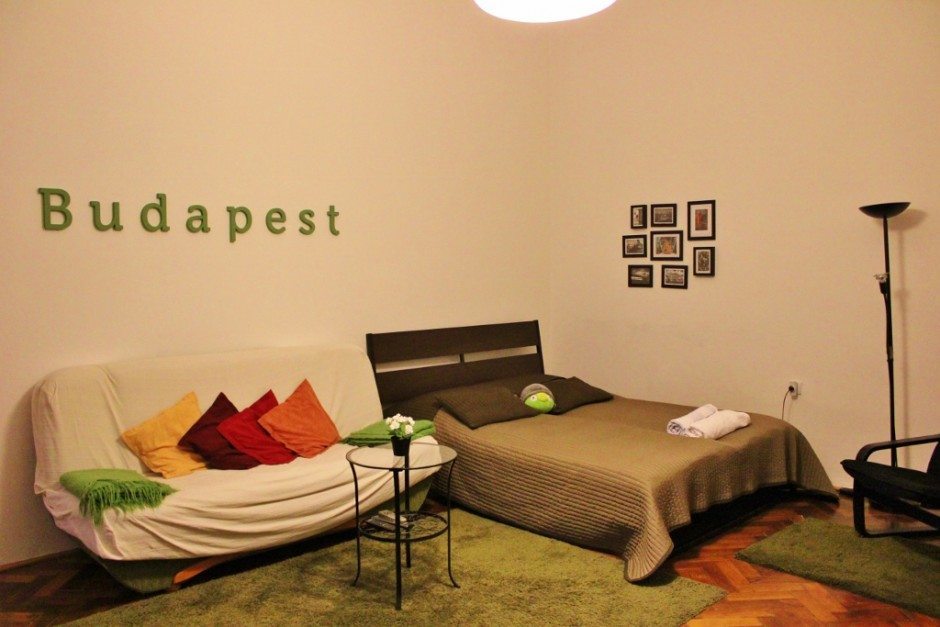 Our accommodations in Budapest only cost $34 a night!

However, the leading factor in the daily average dip was housesitting. In exchange for taking care of Woody the dog for two weeks, we had a free place to stay in London…and free is a favorite word for budget travelers. 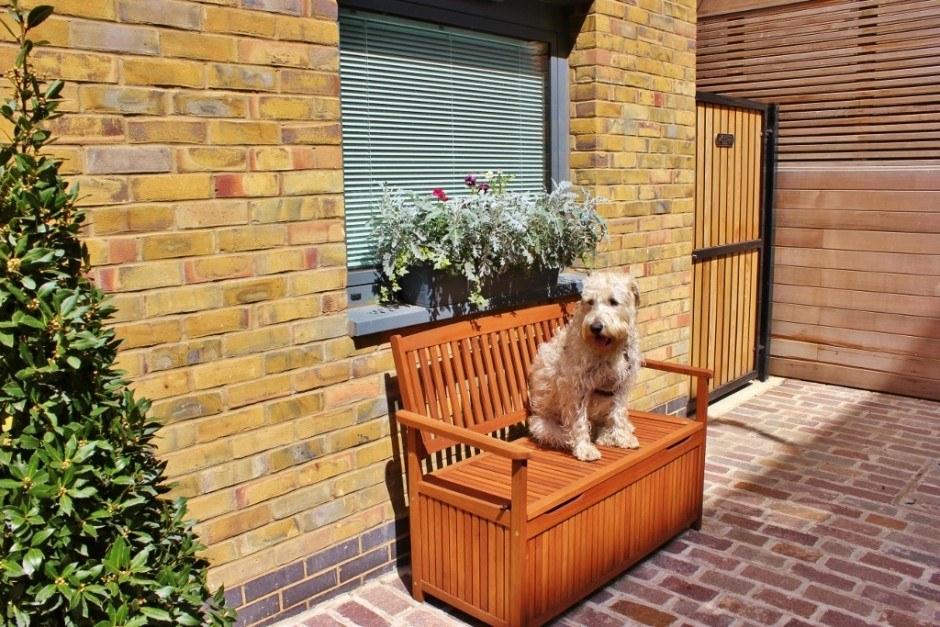 We got to take care of Woody during our housesit in London ~ and free accommodations!

Round the World Budget: Food

We averaged the same daily cost on food almost the entire year, perhaps because it was the easiest to adjust. If we were spending less on lodging, like in Mostar, then we ate out more frequently (and indulged in the goodness of local specialties like cevapi). In the more expensive cities, like Dublin, we cooked most of our meals in and only ate out once when we found a traditional lunch special of beef pie and a pint of Guinness for just $11. In Zurich, Switzerland, we struggled to find any affordable food options – even a frozen pizza from the grocery store cost $8. 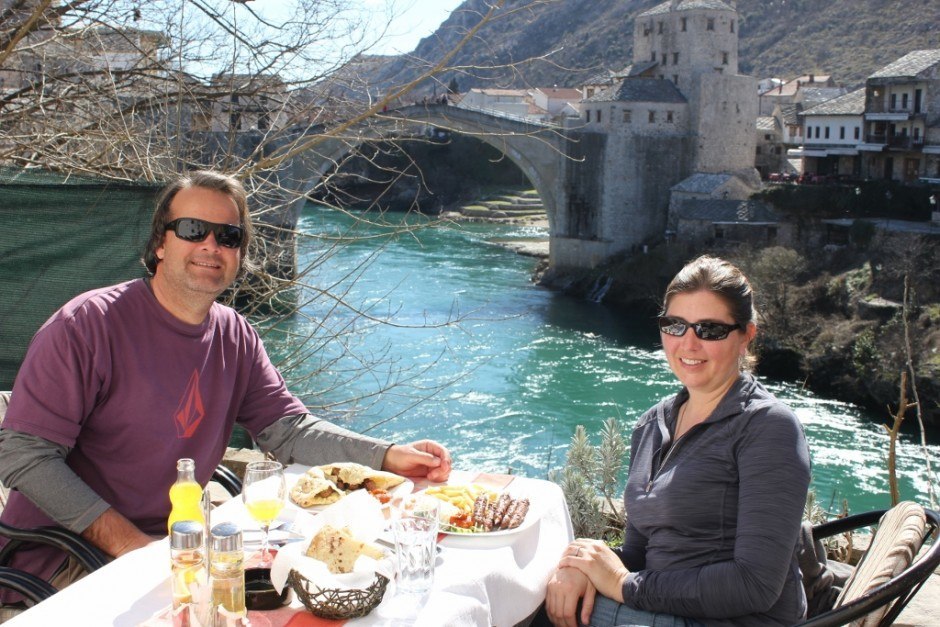 Dining on cevapi – with a view – in Mostar, Bosnia-Herzegovina

Throughout most of Croatia, however, we found the accommodations and food to be inexpensive, allowing us to go out more often to sample the local flavors and our favorite staples of pizza and kebabs. In Ljubljana, Slovenia, it was pure luck that our visit coincided with two fantastic food festivals – Open Kitchen, featuring local dishes and Burger & Pivo, serving nothing but burgers and beer – which weren’t exactly budget options, but were well worth it! 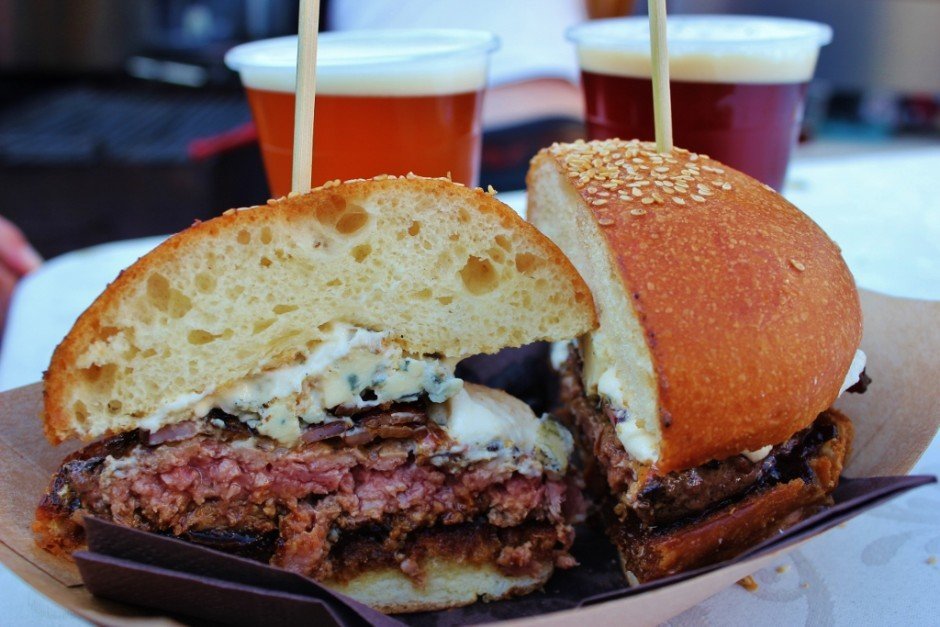 A burger from the Burger and Pivo Festival in Ljubljana, Slovenia.

Round the World Budget: Drinks

Our daily average on drinks somehow dropped in the last 110 days, despite the fact that we went to a hefty number of pubs in London, sipped on plenty of Guinness in Dublin, partied with our friends in Zurich and were hot on the trail of the craft brew scene in Zagreb, Ljubljana and Budapest. In London and Dublin, pints cost a pretty penny at about $7, but we were often drinking in more touristy places. 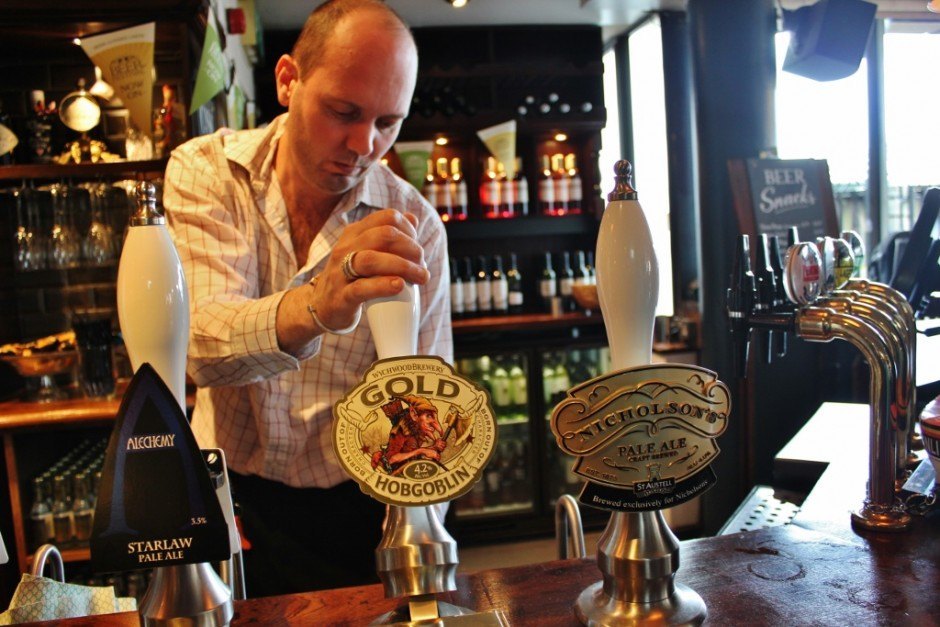 A classic pub in London serving up classic pints of cask ale.

In Zagreb, the craft beer was only slightly more than mass produced beer (and so much better!), only costing about $3 a glass. In Ljubljana and Budapest it was only a bit higher than that. Our favorite way to save on the budget in London, while still imbibing with the locals, was to grab a few cold beers and a bag of chips (or crisps, as they call them) from the corner store and head to the park. 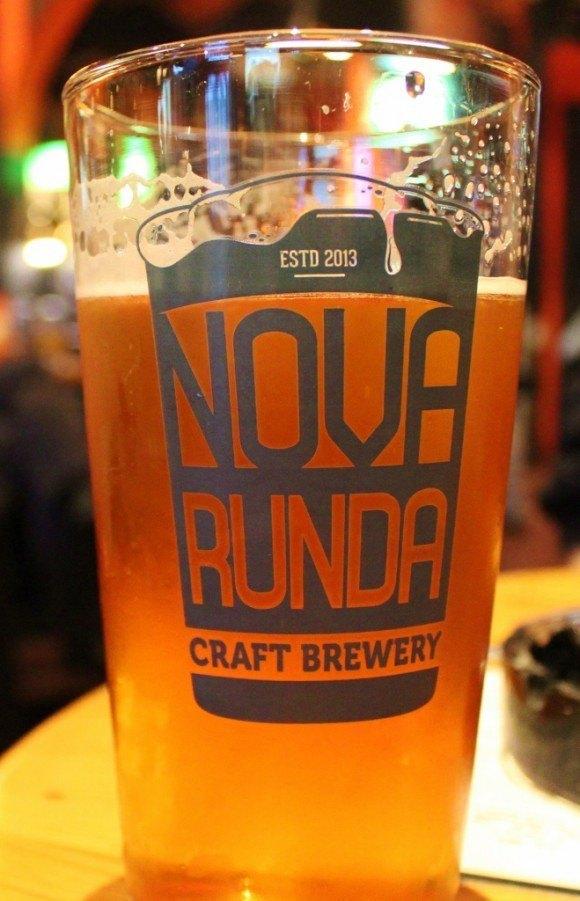 Round the World Budget: Transportation

Our average cost for local transportation still seems slightly high to me. However, we did include the cost of bus and train transportation from city to city while traveling throughout Croatia, Bosnia-Herzegovina, Slovenia and Hungary (whereas we have not previously included the cost of flights as we’ve traveled between major cities and countries). 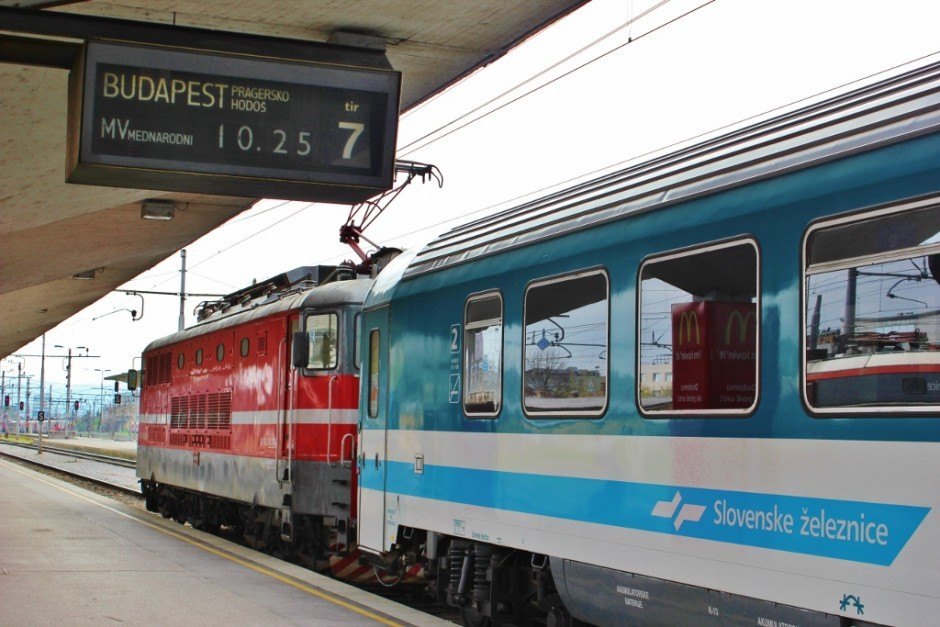 Our train from Ljubljana, Slovenia to Budapest, Hungary.

Overall, we found the public transportation to be inexpensive, clean and efficient throughout Europe, which allowed us the opportunity to make several day trips to nearby towns; Perast, Budva, Trogir, Krapina and Lake Bled just to name a few of our favorites. Transportation in London was pricey (during our three week stay we spent $150 total), but riding the red double-decker buses at $2.25 per ride was often more affordable than the Tube. 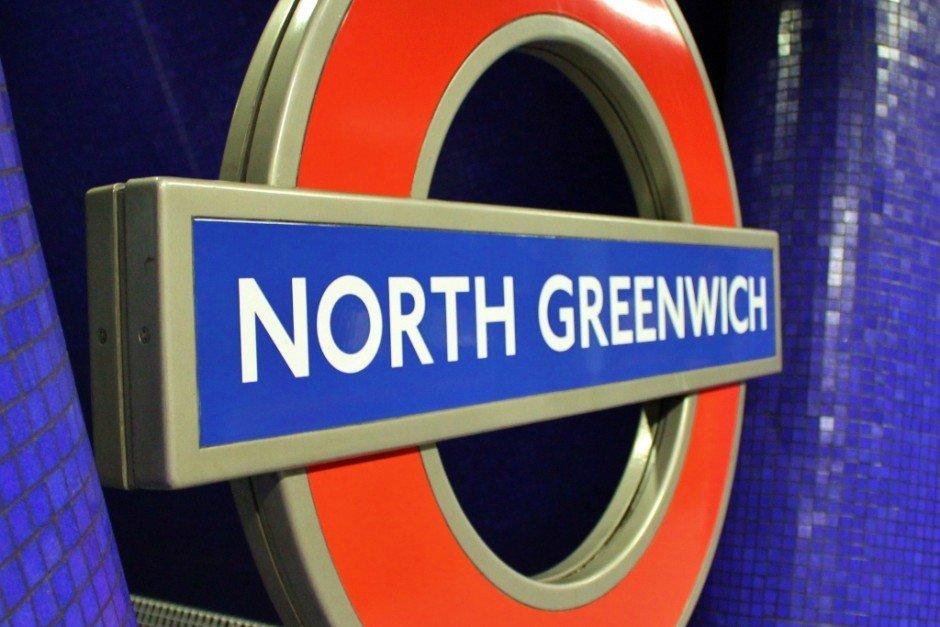 Taking the Tube in London was an expensive option, but quite efficient!

Round the World Budget: Entertainment

The longer we have traveled, the less we have spent on entrance fees and other entertainment. Perhaps we are getting better at seeking out free options (like the London Sky Garden) or maybe paying to climb yet another bell tower for the view is losing its luster. That being said, we were willing to pay a small fee to visit a historic mosque in Mostar ($6 each) and tour the ancient Diocletian’s Palace in Split ($4.50 each). 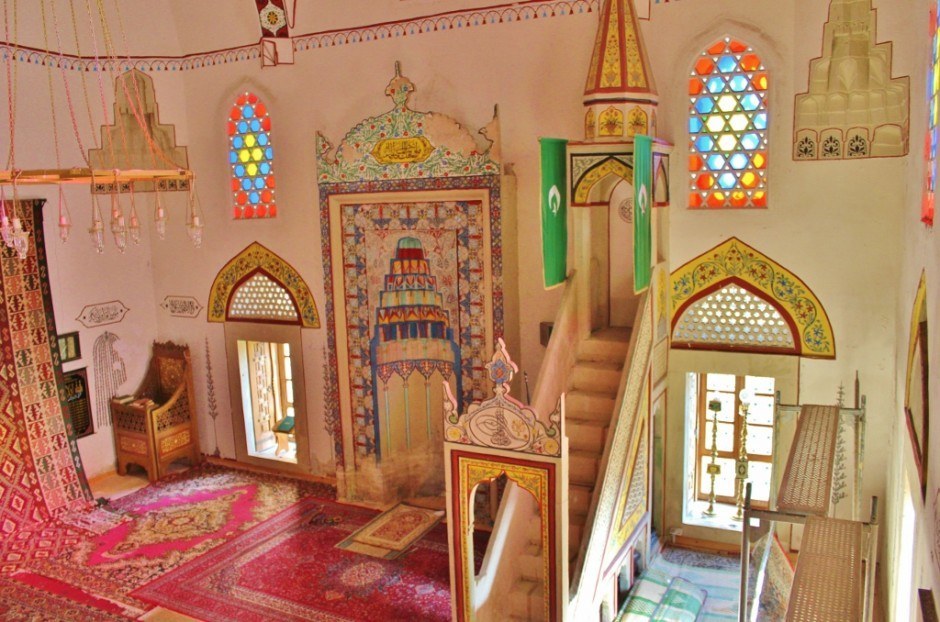 We paid an entrance fee to visit a mosque in Mostar, Bosnia-Herzegovina and found it fascinating!

Our only real splurge in the past 110 days was in Dubrovnik when we rode the funicular to the top of Mount Srd ($8.50 each) – but we saved by making the hike down on the return trip. Other entertainment costs came in Plitvice Lakes and Budapest, but both were stellar deals. Our two-day, winter pass to Plitvice Lakes was $13 each and, in Budapest, we spent an afternoon soaking in the thermal baths and an evening at the opera, all for a total cost of less than $20 for both of us. 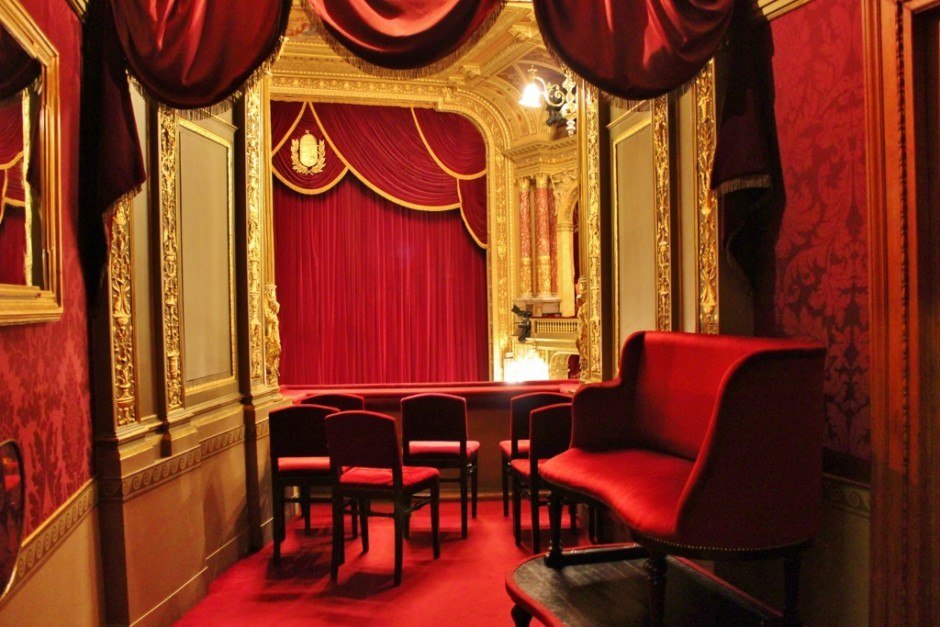 We paid only $2 each for seats at the opera in Budapest…and got upgraded to the 6th row!

Round the World Budget: Overall

When we calculated our final numbers, we were astonished to see our daily average drop to less than $90 a day – more than $10 less than we had anticipated spending. When we started out, we struggled with whether or not $100 a day would be a sufficient amount to reap the benefits of travel. As it turns out, it’s more than enough. It took some time, but we have honed our skills at balancing budget and experience. We are focusing on the bigger picture of travel as a lifestyle – and we’re finding it quite agreeable!

But wait…there’s more! There are additional costs than the ones stated above in long term travel – like flights, travel insurance and technical necessities. We haven’t included that information in our daily amounts, but we did budget for them before we left. Click here for the total cost of traveling the world.

We want to know: Have you set a Round the World Budget for your travels? Tell us about it in the comments! 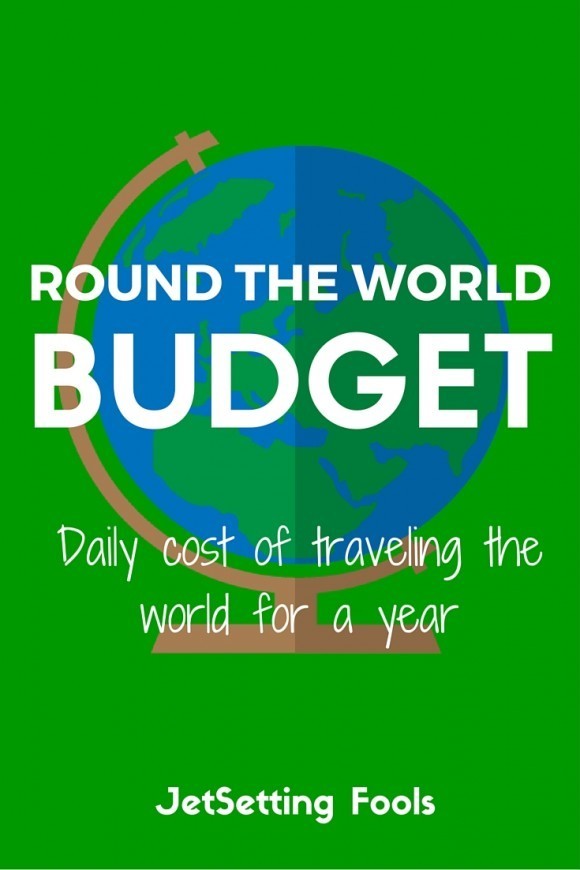 12 thoughts on “Round the World Budget: Daily cost for a year of travel”