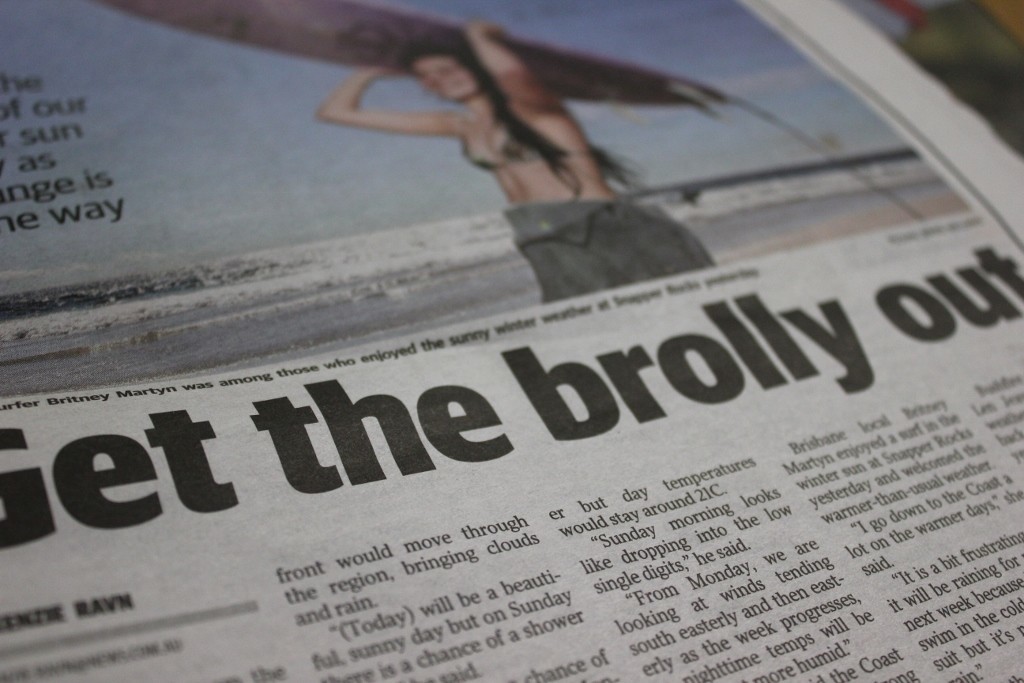 It’s nice traveling in an English speaking country; the frustration of translation is taken out of the equation making everything a little easier. Even with the adorable, Australian accents (which we love), we have little problem clearly understanding…until they toss in Aussie slang. And, Australians love their slang. Sure there are some well-known terms they use like ‘G’day’ and ‘Mate,’ but there are so many more that leave me clueless.

Some Aussie slang lingo is as simple as abbreviating. Town names are shortened: Coolangatta becomes Cooly; Brisbane is Brissy; and the Gold Coast is The Goldy. Breakfast converts to breaky, which is easy enough to understand. My breakies usually consist of a cuppa and a bikkie (cup of coffee and a biscuit, which is really just a fancy word for cookie).

But, brolly, short for umbrella, well, that one took me about three days to finally figure out. And then there are terms like arvo. This one tripped me up to the point I had to ask. It means afternoon….as in, the band plays Sunday arvo. Yeah, I still don’t get that one. 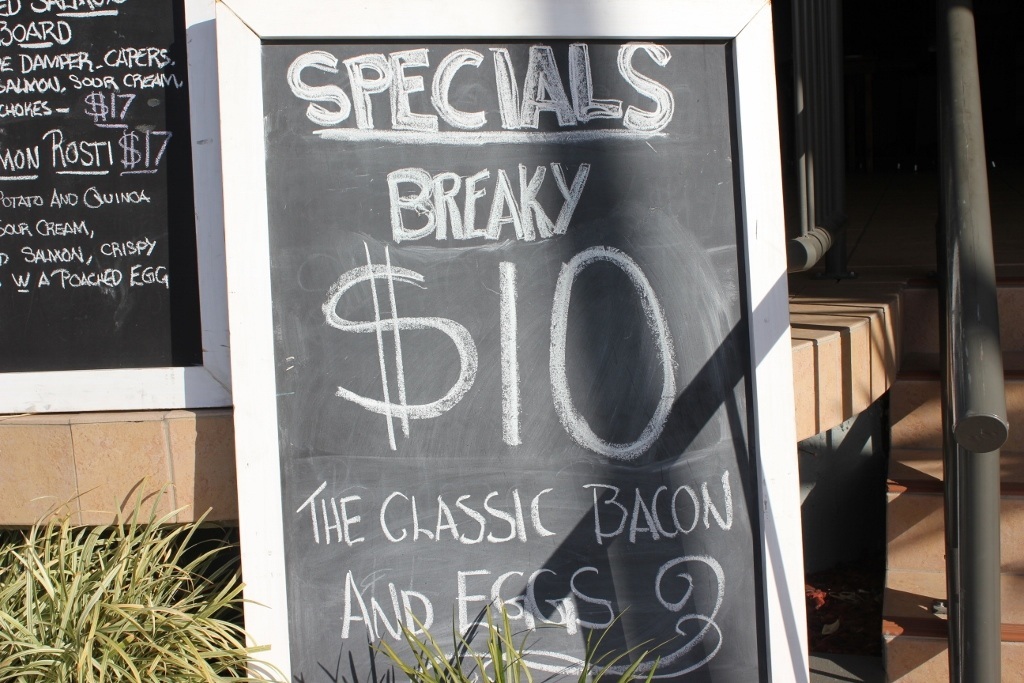 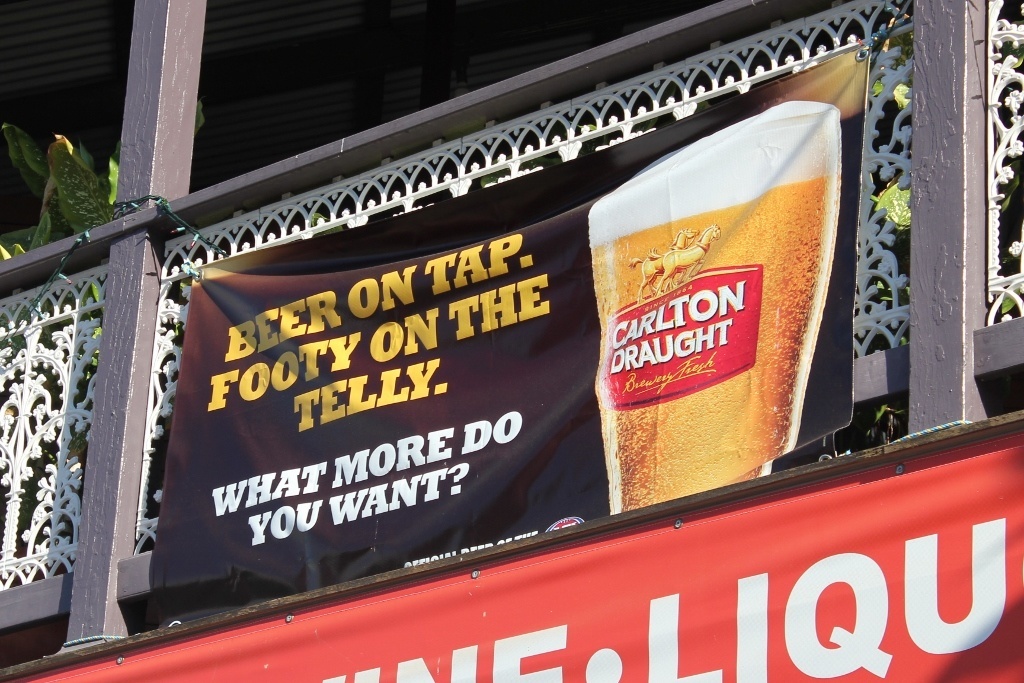 Aussie Slang for bar and beer terms add a new level of confusion. The words are not so foreign, as their meaning. A stubby is a bottle of beer, a tinny a can. For draught beer, from small to large, are pots, schooners, pints (got that one!!) and jugs, which are pitchers.

Some blokes go to the bar for the Pokies (slot machines) but most go to get pissed (drunk, not mad). ‘A slab from the bottle shop’ is ‘a case of beer from the liquor store.’ And, if you say you’ve got the ‘next shout’ that means you’re picking up the tab for the next round…so don’t say it unless you mean it. 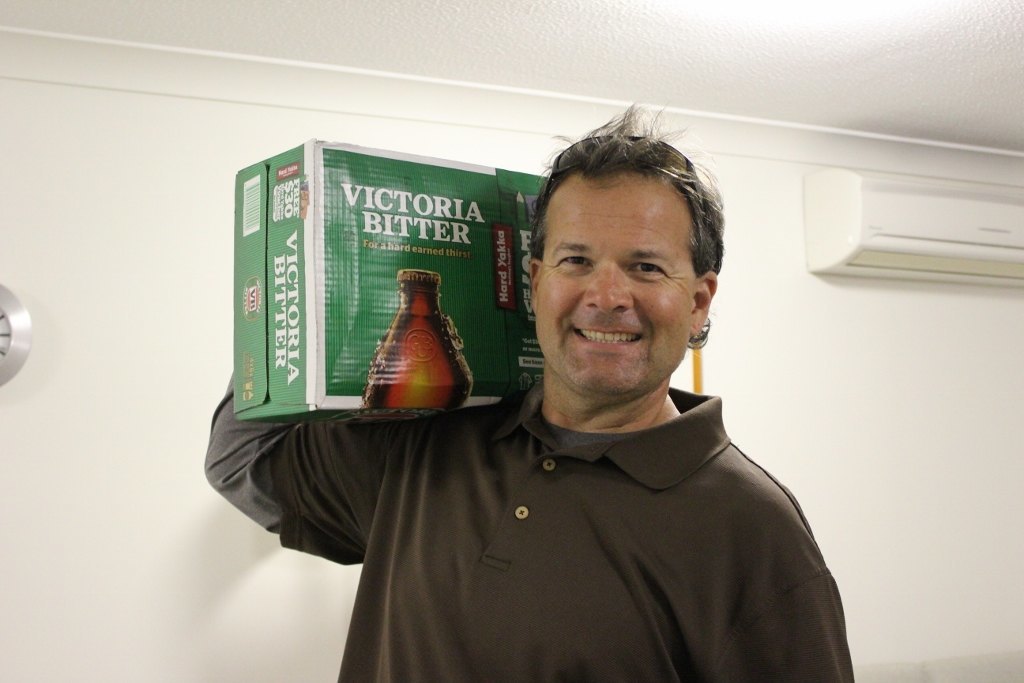 Kris with a slab of VB…

Aussie slang is so ingrained in the culture that international companies adhere to it. The best example: in commercials, McDonald’s refers to themselves in the Aussie slang as Macca’s. This would be equivalent to a McDonald’s commercial in America where they identified themselves as Mickey D’s.

Unfortunately, the lingo we learn in America is all wrong. There is no such thing as ‘Shrimp on the barbie,’ mostly because they don’t call it shrimp! They are called prawns here in Australia (however, this revelation did not stop us from having our own ‘shrimp on the barbie’ cookout). In other American advertising falsehoods, Fosters is NOT Australian for beer. I haven’t seen it in any stores or bars (and we’ve been in a lot of bars!) 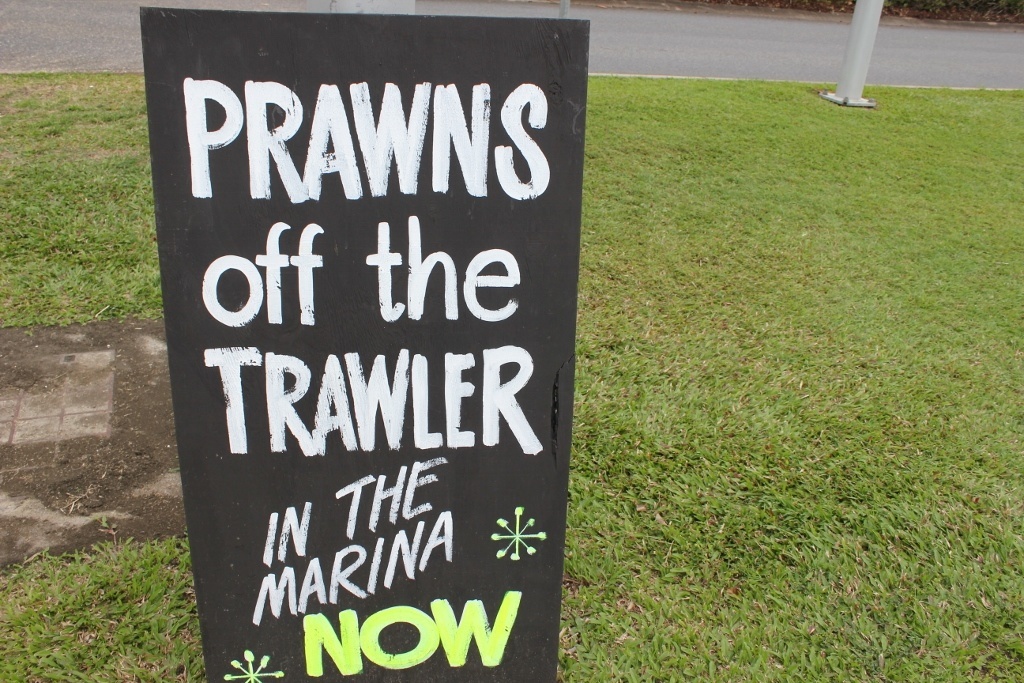 Prawns off the trawler is Australian for Shrimp off the boat.

Sometimes the accents do trip me up, like the silent R (Cairns is pronounced Cans), but especially when it comes at the end of a word and instead becomes a soft A. I’m not in the Land Down Under, it’s the Land Down Unda. And, my biggest American-accent offender of all: saying Aussie, instead of Ozzy; it’s a dead giveaway that I’m a Yank.

On that same note, it is absolutely hilarious to hear Australians fake an American accent, which they are surprisingly good at versus the other way around. They suddenly sound so serious instead of light and breezy ~ which I guess is a nod to their laid back lingo and culture as a whole.

Over our numerous visit to Australia, I feel like I have gained a fairly solid understanding of Aussie Slang. And, while I’m sure I won’t be mistaken for a local anytime soon, I wouldn’t be surprised if someone acknowledged my progress with an encouraging “Good on ya, Mate!”

We want to know: What is your favorite Aussie slang? Tell us in the comments!

2 thoughts on “Aussie Slang: Do we speak the same language?”