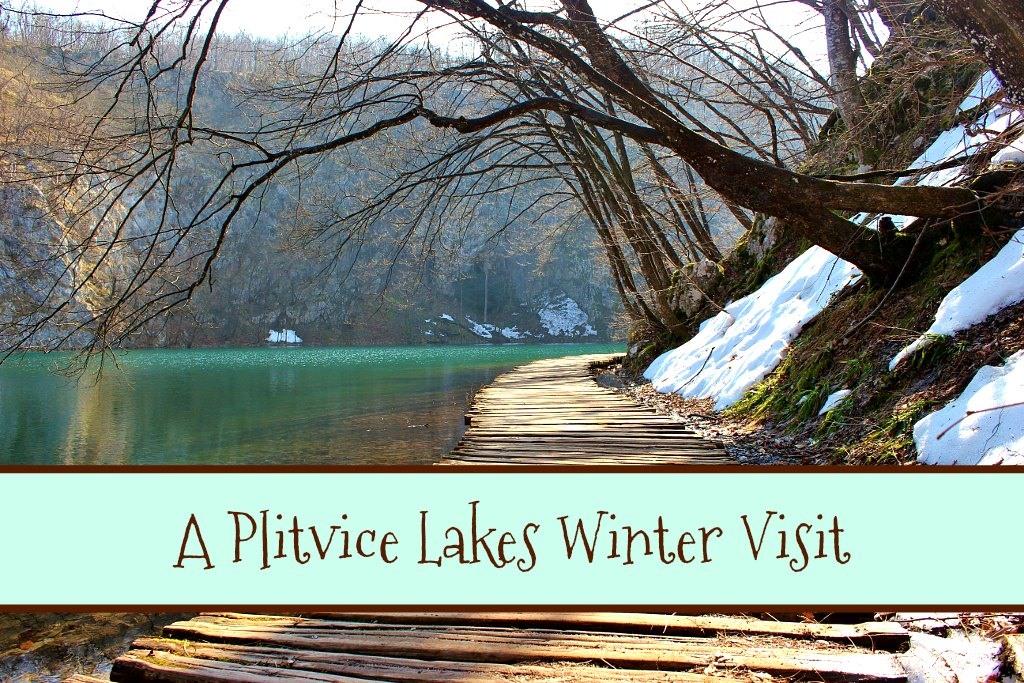 Traveling From Split To Plitvice Lakes By Bus

We departed Split on a warm, sunny day. The bus ride from Split, Croatia to Plitvice Lakes took us along the stunning coastline, past Trogir and north to Zadar. But, once we turned inland the sky turned dreary. Three o’clock in the afternoon looked more like six and the cooler air was permeating the windows. We were getting closer to the snow-capped mountains that had for so long been in the distance and city life gave way to rural surroundings. We passed sheep, llamas, cattle and ostrich. Then we passed patches of snow. We had not considered snow in the Plitvice weather forecast when planning our Plitvice lakes Croatia winter visit.

On our arrival, the Plitvice Lakes weather was dismal. Snow covered the hills and my mind was racing trying to calculate exactly how many layers I could pile on myself for warmth. Admittedly, we’ve been chasing winter throughout our entire journey, but we had yet to encounter snow. Visiting Plitvice Lakes in winter was going to be slightly chillier than we had expected, but we were committed to staying two full days at Plitvice Lakes.

The following day, we woke to overcast skies, which had us dragging our feet. We were clearly not heeding the advice of an early arrival to Plitvice Lakes to avoid large tour groups. We pulled on multiple layers, hoping they would keep us warm. After a 15 minute walk from our accommodations (more on where we stayed at the end of the post!), we were standing at Plitvice Lakes Entrance 1, where a large tour group cluttered the ticket window.

Our Plitvice winter visit fell within the off-season pricing. The cost of our Plitvice Lakes tickets two-day park pass was just $13 USD, which is heavily discounted from the peak. When it was our turn to pay our Plitvice lakes entrance fee, we requested the two-day pass. The seemingly puzzled attendant bluntly replied, “But the Plitvice Upper Lakes are closed.”

Closed? What do you mean the Upper Lakes are closed?! I felt like Clark Griswold arriving to a closed Walley World. How had we missed this very important detail about Plitvice winter visits? I had read about the possibility of ferry boats not running within the park, but assumed there were Plitvice Lakes walking routes that led to both the Lower and Upper Lakes. Evidently, I was wrong. My disappointment was obvious. Kris just shrugged, “OK, we still want the two-day pass to see the Lower Lakes.”

NOTE: Plitvice Lakes Tickets can no longer be purchased on arrival! See below for more details!

Feeling defeated and with my shoulders slumped, we paid the Plitvice Lakes National Park entrance fee.  As we walked through the Plitvice entrance, I kept my eyes on the ground, brooding over the unsatisfactory news.

When we approached the railing, I finally looked up and was left speechless at the sight before us: Veliki Slap (Big Waterfall Plitvice). Across the canyon, five streams of water tumbled over the edge of a cliff into aqua colored pools, which then cascaded in shorter falls into deeper pools. Even with the grey skies, the spectacle was breathtaking and my downtrodden demeanor was doing a flip-flop.

Below us I could see the Plitvice Lake trails of planked pathways that wind through the Lower Lakes and I was thrilled to see how close we could get to the water. With only a slight tinge of disappointment left, we set off to explore the Plitvice Lakes waterfalls.

The park is designed to allow guests to get up close and personal with Plitvice routes at lake level. We began our self-guided Plitvice tour on the main path that descended quickly to water level. Throughout the park, Plitvice trails follow the water’s edge. There are four lower lakes (Kaluderovac, Novakovica Brod, Gavanovac and Milanovac) connected by streaming and tumbling waterfalls – all of which are on the main Plitvice Lake route.

Book a Guided Tour of the Park in advance!

The lakes and waterfalls were created by the natural phenomenon of karst hydrography, which is explained best on the park’s website. While I do find scientific explanations to be interesting, the visual sight was far too distracting to be able to fully comprehend it. Plitvice Lakes was declared a national park in 1949 (Croatia’s first national park) and designated a UNESCO Heritage site in 1979.

It was quite evident that it was still the Plitvice Lake winter season, with only a few flowers, budding plants and birds signaling the coming of spring. Bare tree limbs and exposed rocks surrounded by intensely colored rushing water added a contrasting element to the scene.  Perhaps not the postcard picture that lured us there, the one major upside of our Plitvice National Park winter visit was that the park was practically void of crowds, giving us the chance to often feel as if we were the sole visitors.

Since we had two days’ time on our side, we slowly explored the park, stopping to take (way too many) Plitvice Lakes photos, but also to simply enjoy the natural and unique surroundings. Even under a blanket of cloudy skies, we marveled at the the emerald green water and the magnificent, crashing falls.

On our second day visiting Plitvice Lakes, we were energized by the bright blue skies and made our way to the park shortly after opening. We retraced our steps on the Plitvice Lakes routes around the Lower Lakes, appreciating how the lake scenery changed under the sun’s rays.

In addition to the paths that wind through the park at water level, there are also Plitvice Lakes National Park hiking paths that follow the top edge of the canyon on both sides. We got a birds’ eye view of the waterfalls and lakes below from the many lookout points. We followed a western trail across the top of Veliki Slap (Big Waterfall), taking in the views from platforms on both sides. Moss covered stairs zig zag from the top to the misty base.

In the end, we were pleased with our Plitvice Lakes winter visit. Although we are still disappointed that we didn’t get to see the Upper Lakes or the park in full bloom, there were several perks to visiting Plitvice Lakes National Park in the winter. Without the crowds we were able to slow down and thoroughly appreciate the natural splendor.

Are you ready to Visit Plitvice Lakes now?!

Here is a quick guide of Plitvice Lakes information for your visit.

Plitvice Lakes National Park is open every day of the year. However, times vary by season. Check the official website for more information about times.

Since 2019, Plitvice Lakes has made a major change to how visitors purchase tickets. Park visitors no longer queue at the gates to buy tickets. (In fact, Plitvice NP tickets can only be purchased at the gate if there are any available time slots.) Instead, visitors are directed to book tickets online, which are valid for specific dates and times. Most importantly, tickets must be reserved 2 days in advance of entry!

Tickets are available for 1 and 2-day passes. Plitvice Lakes ticket costs vary by season and visitor’s age. See the official website for current price of admission and for purchase.

There are pros and cons to visiting Plitvice Lakes National Park in every season. In the summer, it can be hot and the crowds can be intense, but the scenery is lush and colorful. A Plitvice Lakes winter visit means the Plitvice Upper Lakes will be closed, but there will be fewer crowds and a less expensive admission price. If visiting Plitvice Lakes in the spring, the Plitvice weather could be warm or cold, but there will still be fewer crowds and shoulder-season pricing. A Plitvice Lakes autumn visit means changing leaves, which can add to the scenery. We re-visited Plitvice in the autumn when the Upper Lakes were open and were not disappointed…but we did have to content with the crowds!

Use this link to Google Maps to find your way around Plitvice Lakes, Croatia.

How To Get To Plitvice Lakes, Croatia

Plitvice Lakes is located on the Croatian interior, but is still easily accessible via organized tour, private guide, personal vehicle or public transportation.

If self-driving to Plitvice Lakes, use Google Maps for directions. The main parking lot for the park is across the street from Plitvice Lakes Entrance 1.

It is possible to use public transportation for a day trip to Plitvice Lakes – or even stopping for a few hours to see the park while traveling from one city to another (ie: Zagreb to Split or Zagreb to Zadar). In high season, it may be wise to purchase onward tickets in advance or immediately upon arrival, as buses do get full.

There are lockers at the park that are free to use, as well as a communal, unattended luggage storage area at Entrance 1. Ask for keys from the Plitvice Lakes National Park Information Office.

Book a private transfer from Split to Zagreb with a Plitvice Lakes Tour!

Check bus timetables from Split to Plitvice Lakes on BusCroatia.

Book the popular and highly-rated 12-hour tour from Split to Plitvice Lakes on Viator.

Check bus timetables from Zagreb to Plitvice Lakes on BusCroatia.

Book an organized and top-rated day trip from Zagreb to Plitvice on Viator.

Check bus timetables from Zadar to Plitvice Lakes on BusCroatia.

Book a full-day, 5-star tour from Zadar to Plitvice Lakes on Viator.

Where To Stay Plitvice Lakes, Croatia

Although Kris referred to our adventure as ‘Plitvice Lakes Camping,’ we had actually booked a studio apartment at a guesthouse with a rate that fit our budget in village of Rastovaca. Our host was waiting for us at the bus stop and drove us the short 1km to the house.

We have found that staying in Airbnb apartments is often less expensive than hotel rooms – with the added benefit of a kitchen and, often, more space. Plitvice Lakes holiday apartments can also be searched on FlipKey (which part of TripAdvisor). However, for those who prefer staying in traditional accommodations, there are a few Plitvice National Park Hotels to choose from in – or close to – the park. Start your search now for hotels, guesthouses and apartments on Booking.com.

Tip: There is one small convenience store at Plitvice Lakes Entrance 1 that has basic items, but no grocery store within walking distance of the park. We brought our own food (rice, carrots, apples and wine, of course!) for our 3-night stay so that we could prepare meals in our Airbnb apartment.

Before You Go to Plitvice Lakes NP

We want to know:  Have you experienced a Plitvice Lakes winter visit? Have you visited Plitvice Lakes National Park in a different season? Give use your best tips and travel hacks in the comments below!