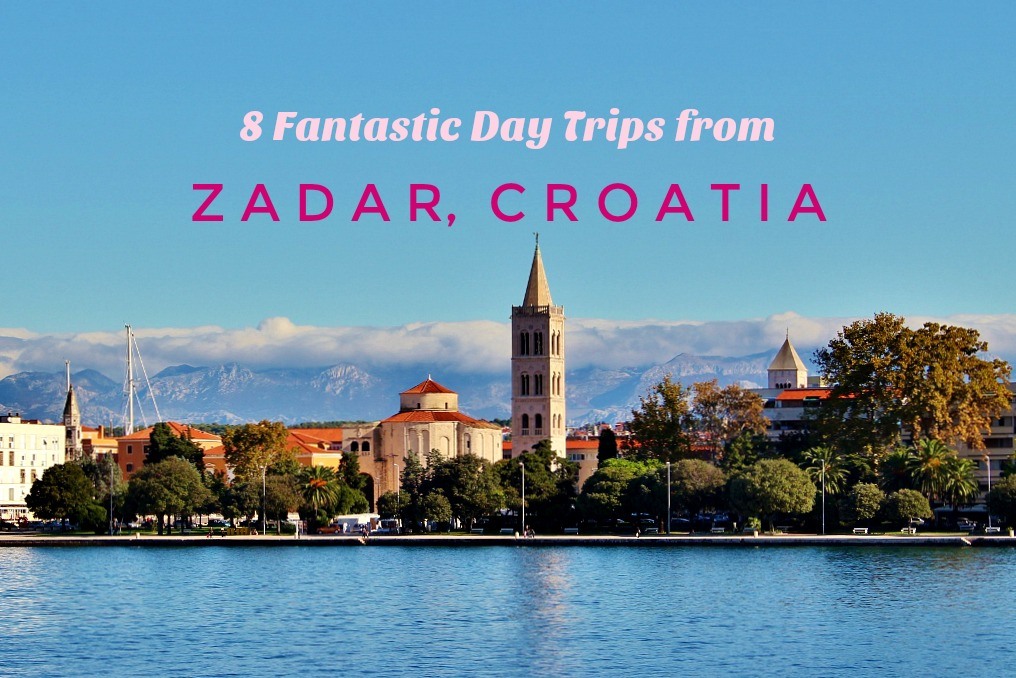 The historic town of Zadar, Croatia sits proudly on a peninsula on the Adriatic Sea. The city’s once-necessary defensive walls still encircle most of the old town Zadar. Inside the fortifications is a blend of old and new – from well-preserved Roman ruins to state-of-the-art technological displays. Zadar old town is comfortable, with enough sights to entertain, but plenty of opportunities to relax over a coffee at an outdoor café. However, it isn’t just the city itself that makes Zadar such an appealing holiday spot. Zadar’s location, on the northern Dalmatian Coast, makes the city an ideal base for exploring more of Croatia. Stunning islands, national parks and some of the region’s most picturesque cities can be reached on day trips from Zadar, Croatia.

Our list of 8 day trips from Zadar include the area’s top destinations. For each of the Zadar excursions, we include details regarding transportation and links to book the Zadar day trips via a tour. Even with only one day in Zadar, there may be enough time to take a quick trip from Zadar!

The Zadar to Krka Waterfalls trip was our favorite jaunt while staying in Zadar. The park is an aqueous wonderland – and an easy excursion from Zadar. The Krka River, which tumbles in a succession of waterfalls, is surrounded by 42-square miles of protected parkland. Within the boundaries of the Krka National park are ruins, churches, islands and caves, which are all reachable by organized tours. However, the main attraction is Skradinski buk, the longest waterfall on the Krka River. Visitors are welcome to swim at the base of the falls, which makes a day trip from Zadar to Krka perfect for hot summer days!

{Read about our Krka NP Trip}

The Kornati Islands are a Zadar must-see natural attraction! The Kornati National Park encompasses 89 islands, islets and reefs – and is best reached by Zadar boat tours; however, the park can also be viewed from the sky with a panoramic flight. The Kornati Islands beckon adventures with plenty of opportunity for swimming (snorkeling and scuba diving, too!), hiking and wildlife watching.

Zadar to Kornati Islands Tours: Book Zadar tours to Kornati NP from the docks or in advance. A few tours to choose from are a highly-rated 8-hour KNP tour or a Kornati NP Sailing Trip.

Spending a day on the water is one of the best things to do in Zadar – and a Zadar boat trip is the best way to do it! There are a multitude of options – from ferry rides to Zadar sailing trips to boat excursions to sea kayaking Zadar. Using the ferry is fabulous for visiting the islands off Zadar. Ugljan, directly across from Zadar, is one of the best islands near Zadar for a boat ride and island exploration.

How to get from Zadar to Ugljan: The ferries make these Zadar trips both easy and inexpensive. Find schedules online at  Jadrolinija Ferry official site.

Plitvice Lakes National Park is one of the most popular Croatia tours. Sixteen lakes of intense blue water are connected by a series of tumbling waterfalls. The water flow has carved a deep canyon into the limestone rocks and natural tufa barriers pool the water before it streams over the edge into the next pool. Wooden boardwalks built just above the water enable visitors to have an up-close experience (although, swimming is not allowed at Plitvice NP). A trip to Plitvice Lakes is one of the best day trips from Zadar!

A day trip to Sibenik is one of the popular Zadar tours because of the close proximity of the two cities. The hillside coastal city boasts a fortress, several churches and the remains of city walls. The compact Sibenik Old Town center is a pleasant day trip for anyone looking for things to do near Zadar.

How to get from Zadar to Sibenik: Zadar-Sibenik buses run multiple times a day. Inquire at the bus station for timetables.

South of Zadar, in Central Dalmatia, is Split – one of our favorite cities in Croatia! In the Old Town that fronts the harbor are the remains of the UNESCO Heritage Diocletian’s Palace. Split is also known for its many beaches, nature trails, historic neighborhoods and the long string of cafes that line the Riva.

Just 29km from Split is the UNESCO Heritage city of Trogir. The historic town occupies a small island, which is connected to the mainland via a short bridge. The best way to explore Trogir is to wander aimlessly through the narrow alleyways of the Old Town.

How to get from Zadar to Split: The bus from Zadar to Split and Split to Zadar takes 2.5 hours, but there are several buses that make the trip daily. Some buses stop in Trogir, but many do not. Check schedules at the bus station for times and stops prior to setting off for the day.

Game of Thrones fans will be thrilled to visit Croatia, as many of the television show’s scenes have been filmed in the country. With the popularity of the show, there are GOT Tours, including GOT day trips from Zadar, Croatia.

Zadar to Game of Thrones Film Locations: Walking in the footsteps of the show’s characters is best done on private day tours from Zadar, as there are multiple stops in some hard-to-get-to locations. Book a GOT Tour here!

Want to explore beyond Croatia? Take a day trip from Zadar to the postcard-perfect town of Mostar, Bosnia-Herzegovina. Not a short day trip (it takes 3 hours to drive each way), the beautiful Old Town is definitely worth a visit! The iconic Old Bridge is draped over the emerald green river and mosque minarets pierce the sky.

Tours from Zadar to Mostar: Zadar excursions to Mostar are best done via car or hired guide, like this Mostar Tour. There are no bus routes between the two cities that would allow for Zadar day trips.

{Read our guide to Visiting Mostar: 27 Things To Do}

More Things To Do In Zadar, Croatia

An entire week vacation could be filled with day trips from Zadar, but there are things to see in Zadar, too!

Zadar sights can easily be discovered by strolling the lanes of the Old Town. However, for more information about Zadar sightseeing, use our free Zadar Self-Guided Walking Tour (which includes a Zadar tourist map of the route) to the top Zadar tourist attractions.

If you would rather a guide lead you on a tip-based free walking tour Zadar, you can join the tour by Free Tours – or book a guide for a walking tour in advance.

Looking for more things to do around Zadar, Croatia? Get on two wheels and go on the Zadar Bike Tour! (Book it in advance on Viator!)

Kolovare is the Zadar, Croatia beach closest to the center and one of the Zadar top attractions in the summertime. However, there are many beaches along the coastline and on the islands near Zadar.

Deciding between Zadar or Split as a base in Croatia?

We like both Zadar and Split as bases for discovering more of Croatia – and think both cities offer a lot to see on their own! For tips on activities and day trips in Split, read our 3-Day Split Itinerary. For the Best 2 Weeks in Croatia, read our Ultimate Guide To Croatia!

Where To Stay In Zadar, Croatia

The best place to stay in Zadar is in the historic Old Town. We stayed in an Airbnb Apartment (Not already a member of Airbnb? Use this link to create an account and save money on your first stay!), but there are many Zadar Old Town hotels to choose from, too!

We have found that staying in apartments is often less expensive than hotel rooms – with the added benefit of a kitchen and, often, more space. Zadar holiday apartments can also be searched on FlipKey (which is part of TripAdvisor) or VRBO.

However, those who prefer staying in traditional accommodations should check out these top-rated hotels (based on guest reviews!) for the upcoming trip: Art Hotel Kalelarga, Hotel Niko and Bastion Heritage Hotel. Or, find a hotel deal by bidding on Priceline.

Budget travelers can search for Zadar Hostels – like, Hostel Kolovare, Boutique Hostel Forum and The Hostel. For a true bargain – and a unique experience – search for hosts on Couchsurfing, where travelers stay with locals for free.

Getting To Zadar, Croatia

Zadar can be reached by plane, boat, bus or car. There are seasonal flights to the Zadar Airport from Frankfurt, Amsterdam, Dublin and London. If arriving by bus, the bus station is not very convenient to the Old Town (map), but within reasonable walking distance. Although not 100% reliable, bus schedules can be searched on Bus Croatia and Get By Bus. It’s best to get around Zadar on your own two feet – as most of the Old Town is a car-free zone.

Our preferred method of getting anywhere is by flying (we are JetSetting Fools, after all!) and when we do need to purchase plane tickets, we start our search for the best deals on airline tickets on Skyscanner.

To get from city to city when flights are not possible, we usually rely on public transportation and take trains or buses. In Europe, we use Eurail to find train tickets and our preferred bus company is FlixBus – as it is economical, clean and comfortable with on-board wifi, seat-back entertainment, refreshments and a toilet. We aren’t keen on driving abroad, but renting a car can often save time and money (especially when traveling with more than two people) – and a car rental allows for greater discovery.

Before You Travel To Zadar

We want to know: What are your favorite day trips from Zadar? Give us your best tips in the comment section below!

Visiting Other Top Destinations In Croatia? Fantastic! Get ready with all the best tips with our complete guides to Split, Zagreb, Dubrovnik, Rovinj, and Pula. Looking to go on an Croatia Island Hoping Adventure? Super! Get set with our detailed guides to Hvar, Korcula, Brac and Vis!