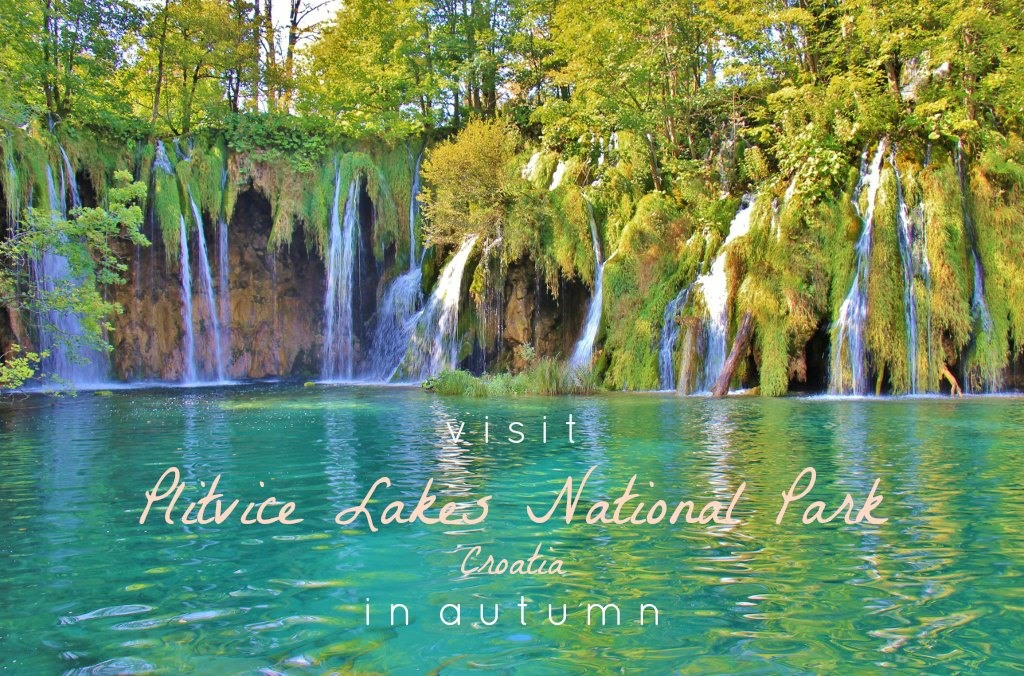 Besides the dramatic coastline, Plitvice Lakes is Croatia’s most well-known natural wonder. The chain of 16 lakes filled with vivid blue water are linked by a series of waterfalls. Streaming, thundering, tumbling and babbling, the flowing water has carved a deep canyon into the limestone rocks. But, what makes Plitvice Lakes extraordinary are the tufa barriers over which the water spills from one lake into the next. The naturally occurring phenomena, in which calcium carbonate is the culprit in a complicated formula {Ca (HCO3)2+water dispersion → CO2+H2O+CaCO3↓ (tufa)}, has been at work for 7,000 years, resulting in mounds of mineral deposits covered in algae and other plant life. In scientific terms, it’s complex, if not a bit drab; to the casual observer, it is quite simply breathtaking to visit Plitvice Lakes.

Our first visit to the lakes was in late winter; the least popular time to visit Croatia’s Plitvice Lakes National Park. During that trip, the sky was blue and the sun was shining, but the trees were bare and patches of snow covered the ground along the water’s edge. The Upper Lakes, the section of the park we had heard was most stunning, was closed to visitors; limiting our exploration of the park to the Lower Lakes. Although we were disappointed, the upside was that we had the entire park to ourselves, void of crowds and tour groups. We moved across the wooden planked walkways at our own pace, relishing the scenery and the freedom to uninterruptedly take as many pictures as we wanted. And, we took a lot.

{Read About Our Experience Visiting Plitvice Lakes In Winter}

However, after visiting Plitvice Lakes in winter, the disappointment lingered; our desire to see the Upper Lakes didn’t fade. A little more than a year later on a return trip to Croatia, we seized the opportunity to visit Plitvice Lakes again. This time, our visit was in early autumn when both the Lower and Upper Lakes were open and when the waterfalls were amidst thick, colorful foliage, tinged in hues of yellow and orange.

It was a crisp, cool day in late-September on our visit to Plitvice Lakes National Park. The paths were familiar; the waterfalls recognizable. But, under the glow of an autumn sun, flecks of golden light shimmered on the teal current reflecting the changing leaves of the hillside trees. We were at the entrance at 7:00am, just as the park was opening, allowing us a few hours of solitude before the crowds arrived. We retraced our steps of the lower lakes, following the path that hugs the canyon wall just barely above the water’s surface and then hiking to the rim of the canyon for staggering viewpoints of the lakes below. Just like fashion trends, the appearance of the lake had changed with the season.

It was nearing mid-day when – with great anticipation – we took the electric boat to the Upper Lakes. Rather than clinging to the shoreline, the elevated paths of the Upper Lakes cut across the water and meandered through the oasis to the base of multiple waterfalls. We were surrounded by rushing water that flowed over cliffs and trickled down moss-covered rocks. Completely enveloped in the aqueous wonderland, colors appeared more intense; blues and greens glowing vibrantly.

We admired the mystical falls dripping with both water and vegetation as we strolled above the translucent sapphire pools. We were no longer alone; the crowds had caught up to us. They marched in herds and we let them pass us by. We refused to be rushed through the Upper Lakes of Plitvice that we had waited so long to see.

Plitvice Lakes Views From Above

Where To Stay At Plitvice Lakes

During our visit to Plitvice Lakes, we stayed in an Airbnb Apartment. We have found that staying in apartments is often less expensive than hotel rooms – with the added benefit of a kitchen and, often, more space. Plitvice Lakes holiday apartments can also be searched on FlipKey (which part of TripAdvisor). However, for those who prefer staying in traditional accommodations, there are some Plitvice Lakes hotels to choose from in – or close to – the park.

Whether traveling from Zagreb, Zadar or Split, most visitors arrive at Plitvice NP by bus or tour. The bus stops are conveniently located by both Plitvice Lakes Park Entrances, just be sure to know ahead of time which stop your accommodation is closest to!  Bus schedules can be searched on Bus Croatia and Get By Bus – but it is best to check the schedule and buy onward tickets in advance from the hut at the bus stop.

Our preferred method of getting anywhere is by flying (we are JetSetting Fools, after all!) and when we do need to purchase plane tickets, we start our search for the best deals on airline tickets on Skyscanner.

To get from city to city when flights are not possible, we usually rely on public transportation and take trains or buses. In Eastern Europe our preferred bus company is FlixBus – as it is economical, clean and comfortable with on-board wifi, seat-back entertainment, refreshments and a toilet. We aren’t keen on driving abroad, but renting a car can often save time and money (especially when traveling with more than two people) – and a car rental allows for greater discovery.

Before You Go To Croatia

Want more travel planning tips? Head over to our Travel Planning page for our complete packing list and other travel resources!

Visiting other destinations in Croatia? We’ve got you covered with our detailed guides to Dubrovnik, Hvar, Korcula, Split, Rovinj, Zagreb and more Croatia guides!